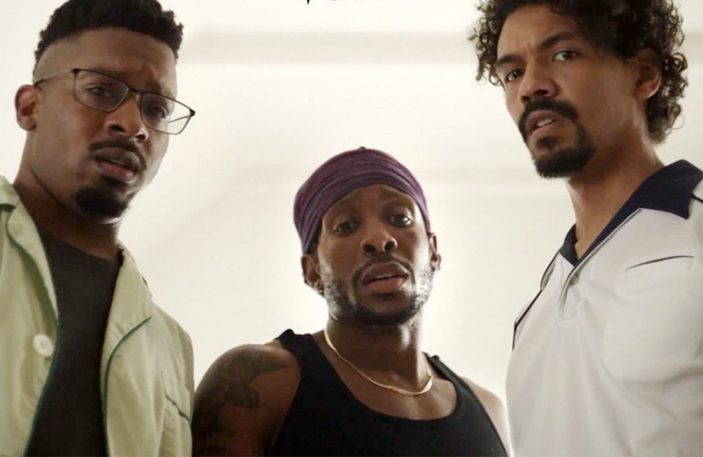 The unexplained corpse of a white woman at the feet of three Black gentlemen doesn’t look good.  Four dead white women looks even worse, and it’s a situation at the centre of Mahogany Drive that writer/director/star Jerah Milligan navigates with precise wit and a social commentary that doesn’t quite travel where we expect it to.

The titular location is where the three are staying in their Airbnb, and it’s also where they start to think said house is responsible for the slaying of each white woman that steps within.  Naturally there has to be another explanation as to why Jerah’s potential bedroom buddy Emily (Olivia Wendt-Fijal) drops dead seconds within entering the domain, but they know that won’t be an easy sell to the female officers who pay them a visit off the call of an apparent domestic disturbance; Addie Weyrich and Margaux Calla Susi as said officers also falling victim.

It’s amazing how in such a short amount of time – the film clocks in at just 13 minutes – that Mahogany Drive accomplishes as much as it does.  The initial dynamic of how these men view the situation through their race isn’t the ultimate conversation lifted, with gender roles and subconscious biases playing a larger role when Mahogany Drive reveals it’s eventual why regarding the supposed “killer” house.

Given that the male-written script culminates with a particularly poignant take on their own gender and subsequent presumptions, Mahogany Drive exists as a far deeper character study than its surface suggests.  This is layered comedy that easily reels its audiences in through the quick banter of Milligan, Braylock and James III, before hooking them with a conversational mentality that, regardless of gender or race, should earn an empathetic response.