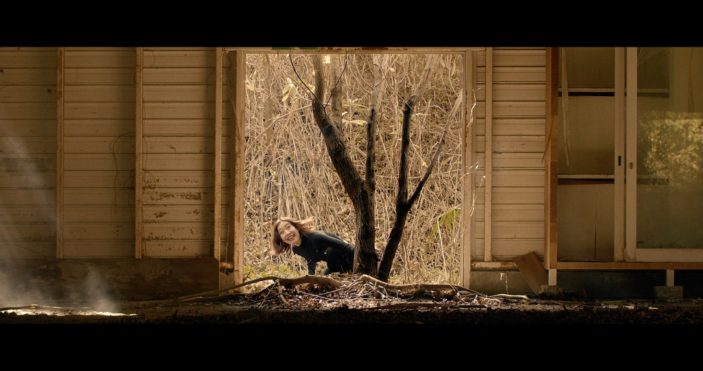 Sometimes an artist’s vision is best conveyed through the use of metaphorical imagery.  Reiki Tsuno is not one of those artists!

Leaning bombastically far into literal chaos and absurdity, Tsuno’s Mad Cats is a high-art-meets-low-brow martial arts extravaganza that embraces melodramatic nonsense – and is all the better for it.

When he receives a message that his brother is missing, Taka (Sho Mineo) goes on the search with a variety of clues that ultimately leads to himself being chased by a swarm of “warrior cats” all on the hunt for those who don’t look after their own pets.  Yes, you read that correctly.

Taka manages to escape their attacks at most turns, and Tsuno knows how to keep things moving with a series of inexplicable set-pieces, but it’s within the film’s surprising emotional beats that Mad Cats elevates itself beyond its slapstick temperament.  Taka forming an unlikely trio of sorts with the lonely Takeo (Yuya Matsuura) and the mysterious Ayane (Ayane), with the latter hardening them up for impending battle, because, you know, these cats have more than just claws.

It’s the moments of the trio in peril and the variety of cats flexing their villainy where Mad Cats feels most confident, with each “cat” adorning themselves with a different weapon of choice, ranging from automatic handguns to pitchforks.  Making the cats literal humans means there’s an understandable ridiculousness to proceedings, but such bizarre behaviour only establishes the silliness of the film’s DNA and serves a heightened edge that allows us an audience to succumb to what’s playing out on screen in a manner that sees us laugh with it and not at it.

Whilst it occasionally flirts with going too overboard, Tsuno more often than not keeps Mad Cats just enough on a leash to avoid crumbling under its own broad ambition.  It’s undeniably funny and, if nothing else, Tsuno is a creative with a unique vision and overflowing inventiveness that knows regardless of how one will respond to his idiosyncrasies, they won’t be bored or presented with a mentality that’s been seen before.