Interview: Zahn McClarnon on the importance of Native representation in his new series Dark Winds 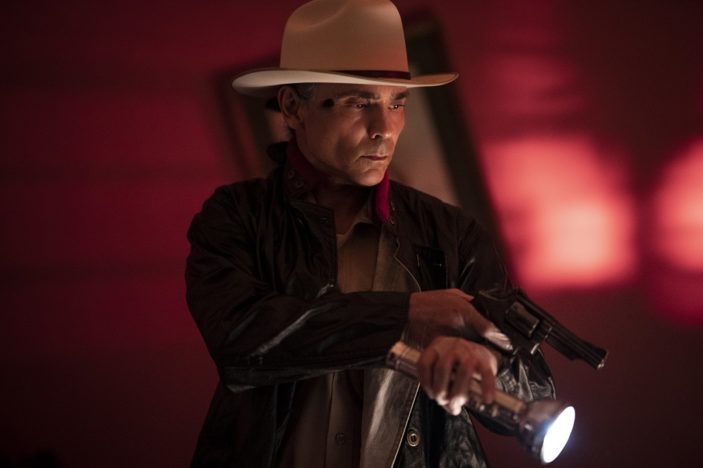 Executive produced by George R.R. Martin and Robert Redford, Dark Winds is set in 1971 on a remote outpost of the Navajo Nation near Monument Valley, and follows Lieutenant Joe Leaphorn (Zahn McClarnon) of the Tribal Police as he is besieged by a series of seemingly unrelated crimes. The closer Leaphorn digs to the truth, the more he exposes the wounds of his past. He is joined on this journey by his new deputy, Jim Chee (Kiowa Gordon) and together, the two men battle the forces of evil, each other and their own personal demons on the path to salvation.

To coincide with Dark Winds premiering on AMC+ in Australia, Peter Gray spoke with Zahn about his expansive career, the importance of Native representation in media, and his hopes for the show’s second season.

Congratulations on this show.  I always appreciate going into a project not knowing what to expect.  You feel like an actor who has really specifically sought out Native representation in your roles.  How has it been for you finding and crafting these roles?

I’ve been doing this for quite a few decades now, and I think it’s a unique time for Native representation in TV and film.  I’m excited that I’m a part of this time.  I’m glad that I stuck it out for the last 30 years.  It wasn’t like this (when I started out).  It’s slowly been changing, but I think we’re in a unique time.  We got a long ways to go!  But we have great shows like Reservation Dogs and Rutherford Falls and now Dark Winds that are slowly pushing that door open more and more so we have control over our own narrative.

As you said that you stuck it out, was there ever a time when the roles just weren’t coming in and weren’t accurate of correct representation or leaned too far into stereotypes?  Did you ever consider bowing out?

I had nothing else to bow out too, unfortunately (laughs).  It was washing dishes, doing construction, or be an actor.  I love the process of acting.  I love jumping into characters.  I love the work. The focus that it takes.  There are moments that you’re living in Los Angeles and you’re getting turned down on auditions, etc, but I really had nothing else to fall back on.  I stuck it out because I enjoyed it so much.  I just knew eventually that I would work more.  I’ve worked continually for a few decades (now).  Something would always come up that would keep me in it.  The last 10 years have been pretty exciting.

Sure, there’s been jobs where I’ve though “I don’t know if I want to do this or not”, and now I’m at a point where I can say no to a few of them.  But they’re getting less and less because we have that control over our stories.  We have producers and writers and directors, and that pool of actors is getting bigger and better.  They’re allowing us to come in and hire consultants.  They’re listening to our voice.  So it’s gotten better, but a long way to go though.

From what I understand, all the writers in the writers’ room were all Native American.  Was that something as an executive producer that you specifically put forward?

For sure.  That was one of the reasons I came on to the project.  Chris Eyre, who’s one of the EP’s, who’s Native, along with George R.R. Martin, was very specific in hiring an all Native writing room.  We had a non-Native showrunner at the time, but we had Graham Roland, who’s Native, write the pilot.  It was very important for the team that we brought in Native voices to recontextualise Tony Hillerman’s perspective on the Navajo culture in his books. 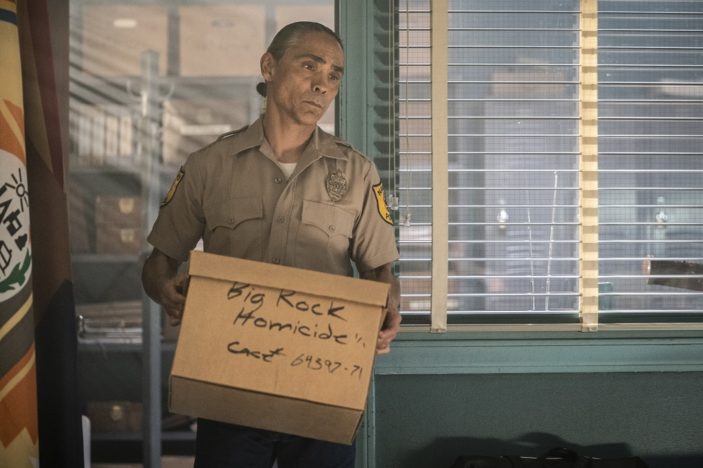 Was the Leaphorn & Chee novel series one you were familiar with?

It was in the ethos of me growing up.  In my culture and the Indian country, the Tony Hillerman books were always there and everyone knew about them.  I had read a few in my early 20’s, and I had seen past productions that Robert Redford had done with the books, as well.  Adam Beach and Wes Studi did a wonderful job as Jim Chee and Joe Leaphorn, as well as Lou Diamond Phillips as Chee.  I actually auditioned for those jobs.

Do you know if this has been a project around for a while in the production stages? Did you push to get this?

You know, I think Robert Redford has been trying to get these books produced for decades now.  We got lucky and landed a good partner with AMC.  I didn’t have anything to do with it, really. It was all George R.R. Martin, Robert Redford, Tina Elmo, Chris Eyre and Vince Gerardis.  I like mentioning their names because it’s important.  They’re the force behind it for the last 5 years in trying to land a home for this series.

The show starts with the heist sequence and it feels as if that could be the direction of the show itself, and then we meet your character and follow the murder he’s investigating.  When reading the script are you piecing it together in the same way the audience is?

Yeah, for sure.  The scripts aren’t completely done by the time we’re shooting, so it’s a part of the job to open up those scripts and see where the characters are going.  Sometimes it can be disappointing, sometimes it’s what you’re expecting, and sometimes it’s more.  It’s like Christmas, where you’re opening your presents.  As an EP I was able to have a bit more of a voice, as far as writing went.  Like Fargo, I didn’t know where (my character) Hanzee Dent was going to go, and I finally opened that script that was all about (him) and where he ended up.  It’s exciting, you know.  As long as I don’t get killed off (laughs). 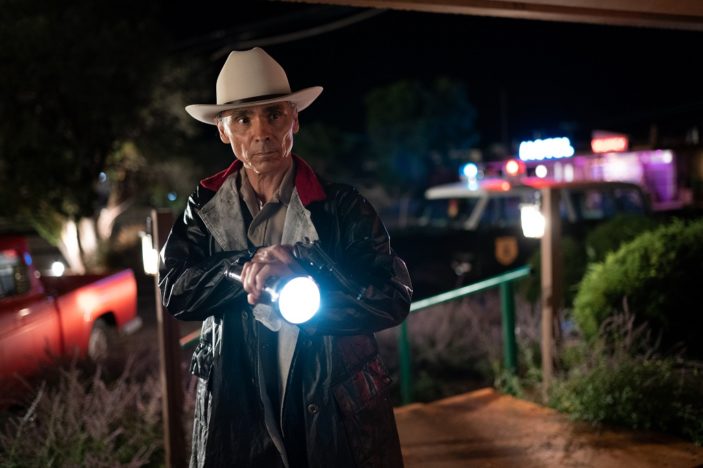 How would you describe Leaphorn in this series compared to other iterations?

I’m always going to bring my own experiences to the character, but we did take some licensing.  In the books Joe Leaphorn doesn’t have a son that has passed away, or a son at all, so we took some creative license to change a few things.  The family dynamic with the wife wasn’t really in the books.  It was written differently.  I didn’t really have a lot to do with that, personally.  That was more the showrunner and head writer who chose the direction we went in.  I write backstories for the characters.  A lot of the heavy lifting was done by Tony Hillerman, so I didn’t have to do a lot.  I just had to put the uniform on and then bring my own experiences and personality to Joe Leaphorn.

How were the filming conditions for you during COVID?

COVID was hard for everyone across the world, but for productions it meant that we couldn’t do certain things, and one of the things we decided not to do was take the cast and crew onto the Navajo Reservation because we were worried about bringing a possible breakout.  It’s such a small community, and we just didn’t want to be those people that caused a breakout.  We sent a B-Unit onto the Reservation, but we had full support of the President of the Navajo Tribe.  We hope that if we get a second season we can spend more time on the Reservation.  But the whole show was shot on Indian land.

When looking at your career and everything you have done, your characters have been so varied.  Do you have a preference when it comes to playing the hero or the villain?

I know you probably want an answers as to what character I liked the most, but they’re all so wonderful to explore.  I enjoyed all of them for different reasons.  I’m starting to really enjoy the patriarchal type of roles.  The father roles.  Having a daughter or a son, and exploring that more, because I don’t have that in real life.  I don’t have an immediate family, so exploring those roles are exciting.

Dark Winds is now streaming on AMC+, with new episodes airing each Sunday. AMC+ is available to stream via Prime Video and Apple TV channels in Australia.