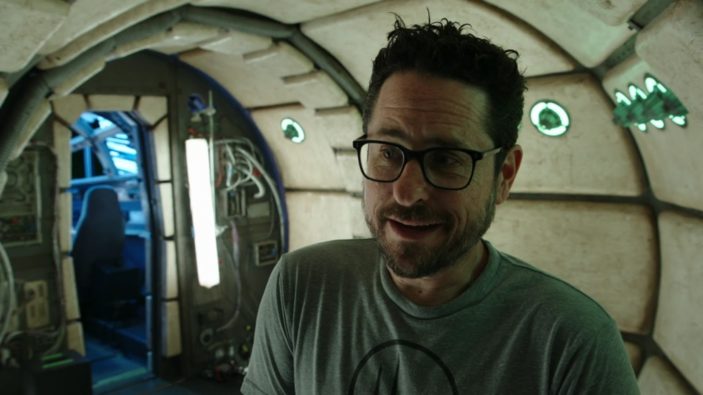 Last week I caught up with Director Debs Paterson, who was tasked the monumental duty of documenting everything that happened during the 7 months of filming Star Wars Episode IX: The Rise of Skywalker. The result is the two hour documentary The Skywalker Legacy, that accompanies the home release of the film (on digital now and on Blu-Ray in Australia from April 1st), that not only charts the making of this film, but reflects upon the 8 films in the Skywalker Saga that precede it.

I spoke to Debs as she was holed up in her home in the UK, after the production she’d been working on in Rome had stopped two weeks earlier, just before the country was shut down due to the Coronavirus. It must have been a strange time to reflect on the Star Wars project, as her and so many others sit and wait for the pandemic to pass and for her industry to restart. But there was a definite glimmer in her voice as she reflected on sitting alongside J.J. Abrams and the team as they made the final film in the Skywalker Saga.

Tell me about how you got involved with Episode IX and The Skywalker Legacy?

My name had been floated around as they were scouting around for a 2nd unit director – though they went with the brilliant Vic Mahoney in LA. So before they got to London they knew who they were going to bring. But as a result of being on that list, I met the producer Callum Greene – and we got on well and he liked my stuff, and we kept in touch. Four months later, I got a call completely out of the blue. They were about a month away from starting principal photography, and said “look, we know this isn’t what you normally do, but we’re looking for a filmmaker to make the official documentary.” They wanted someone to bring a unique point of view to it.

What did that point of view entail? What was the expectation?

I’d heard amazing things about JJ (Abrams), and obviously when Star Wars calls for a meeting, there’s no one in the world who would say no to that. So I went in, I turned up to the Carrie Fisher building at Pinewood Studios (in London), and set down with J.J., Callum and Michelle Rejwan (another Episode IX Producer), and we talked about what we wanted out of the project.

It turned out that none of the four of us had ever been to film school – so for all of us, there was an excitement to be a part of this big machine, and (an opportunity with a documentary like this to) see what all the workings are. And with J.J. being J.J., he wanted us to get as close as possible to the magic, without spoiling the magic. And especially with something like Star Wars. How do you bring fans and filmmakers as close as we were allowed to be?

We were allowed to go into any workshop, into any room. I was in script meetings, design meetings, all kinds of prep. It’s very secretive production, but I was able to read the majority of the script. So I was trying to extend that experience (to the viewer) more broadly, but without ruining any of the magic.

And then I had a meeting with Kathy (Kathleen Kennedy, president of Lucasfilm) early on, and she was wanting to somehow explore the “Why”. Why does Star Wars have a unique place in Western cinema? And why is it a story that can suspend itself over 40 years? So I was encouraged to delve into the genealogy of the whole thing. And that wasn’t hard to do, because as soon as we started it became clear that most people involved in the film, even those at the top of their field, were living their childhood dream. They were all trying to live up to that person they had hoped they’d be when they grew up. So that side of it was pretty easy to explore.

I liked how you drew parallels between this production and the original productions in the 70’s and 80’s – that, as much as they were trying to live up to what came before, they were emulating those experiences the creatives had behind the scenes 40 years ago, whether they realised it or not.

It was so interesting. The DNA of it felt so specific and unique. As we spent 7 months digging into everyone’s process and trying to be as open minded as possible in terms of what is it that makes it what it is. Trying to listen and watch and observe. It isn’t just the story that it is, it’s also the story about how it’s made. There’s something special about the way that it’s made. People have to be so completely creative – both in terms of their imagination, and in their use of the technology. And they have to be so completely collaborative. This isn’t a one person hero show. Everyone needs to be the hero of it.

There’s a quote we got so late in the process, from Matt Wood, the sound designer, who we filmed two days before we locked the documentary. He was talking about how there’s something about the Star Wars quest that IS making the movie, you have to go on a fairy tale quest as filmmakers – it’s sort of impossible, and intoxicating, you need to find the magic beans along the way to get it done.

There’s also an interview from the archives that didn’t make the film, with the special effects guy who the designed the original droids, and he was saying that George Lucas would say what he wanted, and then he’d go and see the preeminent robot experts at the time, tell them what they were trying to do in three months and he’d be laughed out of the office. But they went and did it! It’s that kind of thing. The level of trust, and adventure that everyone seeks – there’s something magical in that, that makes Star Wars what it is, I believe.

We’ve spoke a lot about the about the immense amount of people involved in the project – and how there was so much interest from you as a Documentarian about the sheer scope of it all. So what surprised you most about being a cog in the wheel of such a mammoth production?

Between J.J. and Tommy Gormley, the First Assistant Director, his secret weapon, and all the other department heads, there’s something about the secrecy of the movie, which goes back to the Lucas days – he always kept things quite tight. Even the cast wouldn’t know what was going on!

It was amazing to watch the old interviews with Mark Hamill, and see the change from when he knew Leia was his sister, and how he had to change his tune. He didn’t know for quite a long time into it! He thought he was competing with Han for quite a long time. But because of that level of secrecy, it means that everyone has to work so closely together. Because if you’re not working as part of the team you don’t know what’s going on.

There’s something about that that’s actually an effective way to foster collaboration.

But more than anything else, with J.J. and Tommy, the amount of pressure they were both carrying, it was never sent down the chain and turned into toxic energy. And watching that for seven months, as teams were building multiple sets at any given time across different cities, and working through the editorial at the same time – there was so much going on at any given time and so much pressure, of everyone wanting it to be as good as it could be. But that pressure never was turned into toxic energy, certainly nothing I saw, and I was so close for so much of it.

J.J. really inspires people – he’s got a unique way of getting people incredibly excited about what they’re working on. It’s brilliant.

It’s impossible not to watch the documentary and thing, man I’d really love to work with J.J. Abrams one day.

Right! Dude, that is true. He’s a very special human being. And I understand why he has the reputation that he does. He’s one of the very, very good ones in my opinion.

There’s so much amazing archival footage in the film. Were there any other gems you wish you got to add into the documentary that you didn’t have time for? You must have watched so much of it.

Oh there’s so much. George Lucas talking about the editorial process, that was amazing. And there’s this footage of him with John Williams and Ben Burtt figuring out how they were going to play certain moments. We were able to include some of that thank goodness. The footage with Jabba The Hutt, both in the barge in the desert and the palace, is brilliant. It’s a treasure trove of weirdness, as incredible as it is.

And a lot of the crew who aren’t top level coordinators, they don’t get to read the scripts, so there’s this footage of these two guys who were creating masks, and the stories they were telling themselves about the characters who they were making the masks for – because they had no idea – were incredible. It was hilarious. I wish we had a place to put that in.