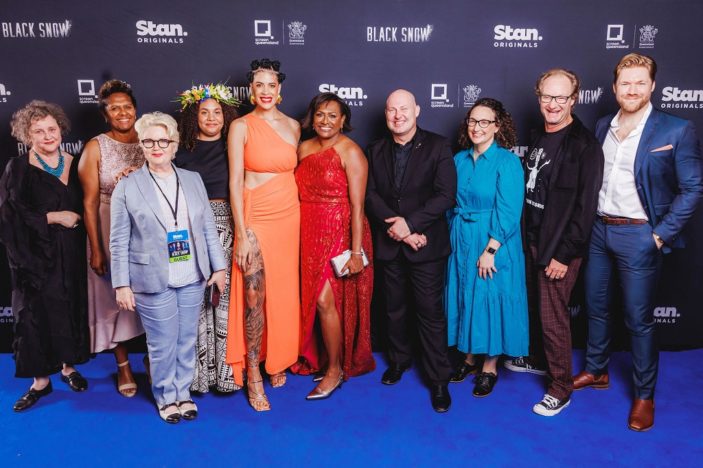 The biggest challenge with cold cases is finding out who people were back then. Who killed Isabel Baker?

Such is the logline for Stan Australia’s thrilling new limited series, Black Snow.  In 1994,  seventeen-year-old Isabel Baker was murdered. The crime shocked the small town of Ashford and devastated Isabel’s Australian South Sea Islander community. The case was never solved, the killer never found. In 2019, the opening of a time capsule unearths a secret that puts cold-case detective James Cormack (Travis Fimmel) on the trail of the killer.

Ahead of the series premiering on New Year’s Day, Peter Gray was invited to the blue carpet event in Brisbane, where the cast and crew – including creator Lucas Taylor, director Sian Davies, and cast members Alexander England, Jemmason Power and Molly Fatnowna – were on hand to discuss the importance of South Sea Island representation on screen, the inspiration behind the show itself, and what audiences can expect as the mystery unfolds.

Lucas, can you talk about the inspirations behind the different elements of the show, such as the use of the time capsule and also having it set in North Queensland?

Lucas Taylor:  The initial inspiration actually came from (when) I was in a small town in central Queensland for winter.  I was working on a job up there and I heard about a time capsule in the town square that was due to be opened really soon.  I was struck by the idea of what is within that time capsule.  Spice Girls CDs? Old memorabilia?  That sparked the idea of (the time capsule) reopening a murder investigation.  That was the initial inspiration, and then the story built from there.

Speaking of building the story, Black Snow is set between 1994 and 2019.  When you are piecing together the mystery and the narrative, do you have everything fleshed out as you’re putting pen to paper? Or does the mystery unravel for you as you are writing the story?

Lucas Taylor:  It’s a little bit of both.  It’s a very complex mystery taking place over two timelines, with Isabel, our lead character in the 90s, looking into a mystery of her own, and Cormack, played by Travis Fimmel, looking into it in the present day.  I had quite a strong idea of Isabel’s arc and where that mystery went.  When we got into the room together, the other writers and the producers and myself, we sat down and spent a lot of time road testing and tossing things around and tried to smack into a place so that both mysteries aligned and were more satisfying.

As you mentioned Cormack.  He seems unhinged from that very first episode.  Will that be something further explored in the series?

Lucas Taylor:  Yeah, we are really happy with the fact that it’s an unusual and surprising introduction to our hero, and Travis just has that aura about him.  (Cormack) has a mystery about him and we set that up in the opening.  I can promise that if you stick with him and the series, you will start to understand what’s at play there.  Like a lot of good detectives (Cormack) has some secrets of his own in his past, and they unfold across the series. 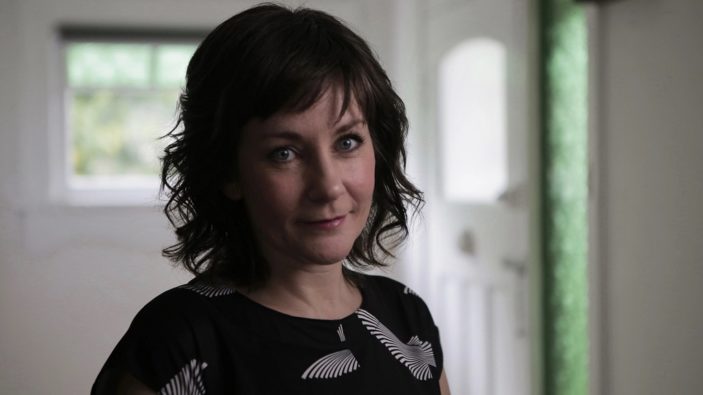 Sian, having directed the first three episodes, and I suppose, lay down the foundation of the show in those episodes, do you have discussions with the other directors about what vibe and style the show is going for?

Sian Davies:  Yeah, absolutely!  Being a set-up director on a television show is more like making a feature film, because you determine the visual style.  In consultation with the producers, we sort of put the cast together and, this is one of the things I’m very proud of, is in that process we found and trained 12 South Sea Islanders who have never acted before.  I hope you will be as blown away by them as I am by what they bring.

Marie Lewis is the cinematographer, and I had a very big visual board that was the inspiration for the show.  Essentially, that’s what Matthew Saville, who did the last three episodes, was absolutely following, but he also brings his own voice and body of work to it.  It’s very much a consistent style.

As a director, you are dealing with two different actors playing the same character at two points in their life. What’s a key bit of direction that you found was really helpful in getting the actors to sync the continuity between their 1994 and 2019 characters?

Sian Davies:  One of the things was that the younger actors started before the adults did, so we started training them first.  You’re obviously casting with physicality and energy that matches.  It was really an opportunity to shape the younger actors knowing who their (older counterpart) was, and then handing it over to them, which was kind of glorious.  I wanted them to have freedom to go “Okay.  What am I like? What are you like?”

The biggest thing, too, and what was really moving the story is that we meet these young people at a time where they have no idea there is a great tragedy ahead of them.  They think they have their whole lives ahead of them.  They are so full of hope and optimism and joy.  It was really interesting to explore the different energy and behaviour of an adult who’s experienced trauma and loss.

I will say that the scene towards the end of the first episode, where the letter is read, gave me chills!

Sian Davies:  Oh, my God, thank you so much.  That really is what’s so thrilling and so terrifying about (this) is that you’re taking it out into the world, and because you’re so close to it… I can’t tell you what it means to hear people have that reaction. 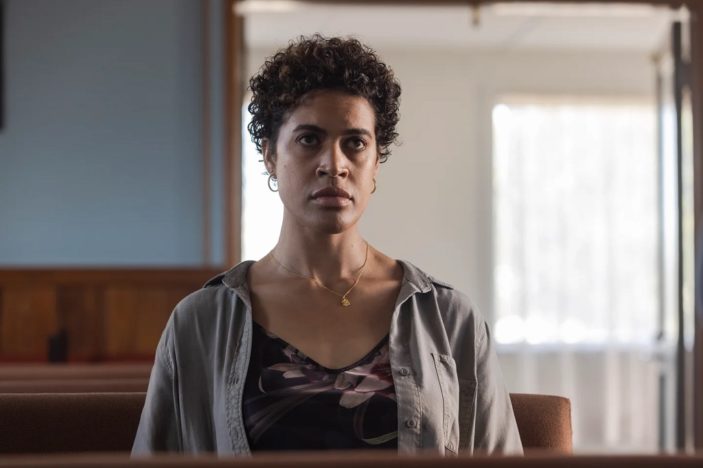 Having just heard from Sian about how the younger actors started production before the other cast, how was it for you, Molly, in working out what you wanted to do with the character of Hazel? And was there anything you discovered about her that you felt Jemmason needed to know in order to understand the nuance of the character you’re both playing?

Molly Fatnowna:  Something that was so important (to me) was the relationship between Isabel and Hazel.  That was such a strong thing that I had to get to between myself and Talijah (Blackman-Corowa, who plays Isabel), because that’s what showed in the older Hazel and what made her as a person, and how the grief and guilt affected her.  I feel like telling Jemmason about mine and Isabel’s relationship off screen really helped with how she was on screen.

Jemmason Power:  And as you were talking about it, it reminded me of filming, because their relationship was so close, both on and off the screen.  I actually had this longing to be with Talijah as a person, but also as a character, which kind of overflowed into how Hazel felt about the whole situation.  It was really heartbreaking, because I never actually filmed with Talijah.  We were able to use that sorrow to feel close to each other.

Filming a series that is a thematically heavy as Black Snow, is it a process of staying in the mindset of the character at all times to keep that intensity up, or are you able to shut off once the cameras stop rolling?

Jemmason Power:  Well, for me, our dramaturge Nadia Townsend was able to give us so many helpful and beautiful tips on how to kind of just wash our character away when we needed to.  Especially for me, because I was coming in later in the game where I had to really feel the effect of losing a sister.  Hazel rarely has any joyful moments, and I’m a naturally happy, joyful person, so I had to really embrace that washing off (of the character). 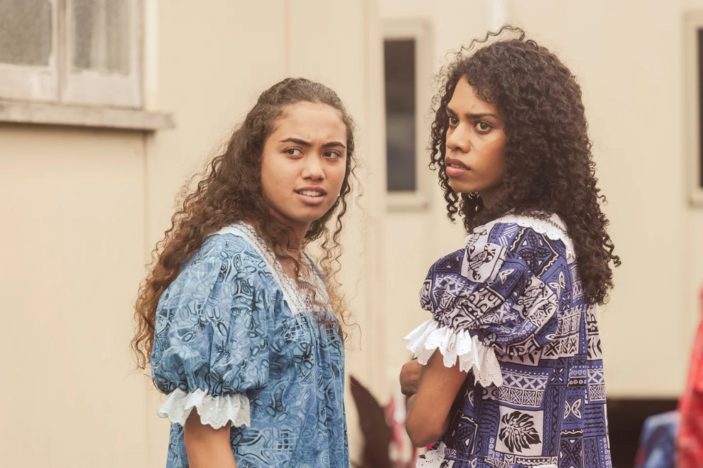 How does it feel to have a show of this size and calibre displaying true, authentic representation of South Sea Island culture?

Molly Fatnowna: It was so amazing. I’m so grateful I got the opportunity. It put me in such a position where I know so much more about my culture now. I know so much more family, and what our family has been through, but also to educate other people on it as well if you don’t understand what it is. It was amazing.

Jemmason Power: We had cultural immersion sessions for everyone (and) that was such a good foundation to set for everyone to know what they were doing and why they’re doing it. Even the lighting and sound departments could really feel it throughout. Whatever was happening off screen was able to translate so well onto the screen. It was beautiful to be able to go on the journey together, not just as a community, but now for the wider community of Australia and the world. It’s insane to think that we’ve been able to achieve this on such a worldwide scale. 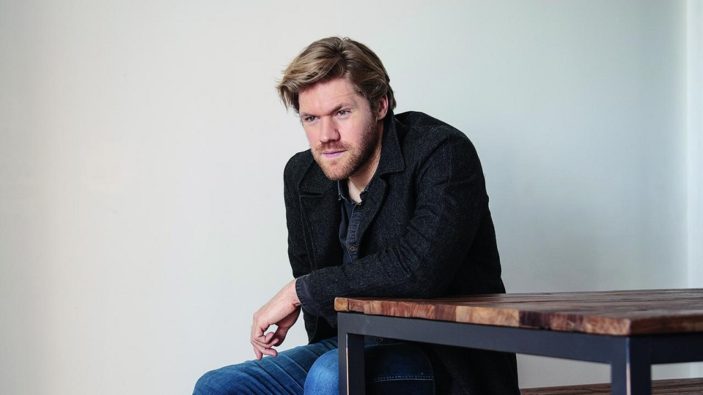 Alex, when a script like this comes across your desk and you read the shocking opening scene featuring Travis Fimmel’s character, what is your first reaction?

Alexander England: There’s a few things going on in that first script! First of all, I couldn’t stop reading them. I wanted to find out what happened! I ultimately had the experience of the audience because I got to read the scripts sequentially, and I just needed to figure out what the hell was going on.

The other thing I look for with ‘potential work’ is the level of writing. This has been beautifully written. There are so many layers that it grows and builds upon. And rather than having to fill the gaps in the writing, it is just so strong right away. The characters were fully realised and I got very excited about becoming a part of that world.

Sian said that the younger actors and characters began production first, and were working on their characters. I asked Jemmason and Molly what their experience was like – so how was it for you working with Josh Macqueen to bring Anton to life, and did he tell you anything he discovered about the character that helped you keep those nuances alive in the 2019 storyline?

Alexander England: There was definitely a shared physical language we needed, like sharing mannerisms to help to that story. But, central to the narrative of Black Snow, we meet Anton at two very different points in his life. Josh has a beautiful, natural exuberance and puppy-dog energy to tell the story of his younger character. And then you meet the salty, seasoned, older, dirty version of him – which is me!

I wasn’t terribly worried because I think we both bought different energies to the character, but we did create a character that’s been through a lot of trauma, and that was me at the other end of it. It was great casting, but I think the story is going to tell itself.

In a streaming era that is inundated with crime stories, whether it’s true-crime or fiction, how do you feel Black Snow is going to stand out from the rest?

Alexander England: I think the most interesting aspect of the show is these two timelines in 1994 and 2019. The 25-year gap, in which both timelines are heading towards different revelations, but also, in this show, you get to see and hear what the characters are doing and saying in the later timeline, their interpretations of what happened, but you also see what actually happened on those nights.

All 6 episodes of Black Snow are streaming on Stan Australia from New Year’s Day, January 1st, 2023.