Interview: Kaitlyn Dever on Ticket To Paradise, working in Australia and what she learned from George Clooney and Julia Roberts 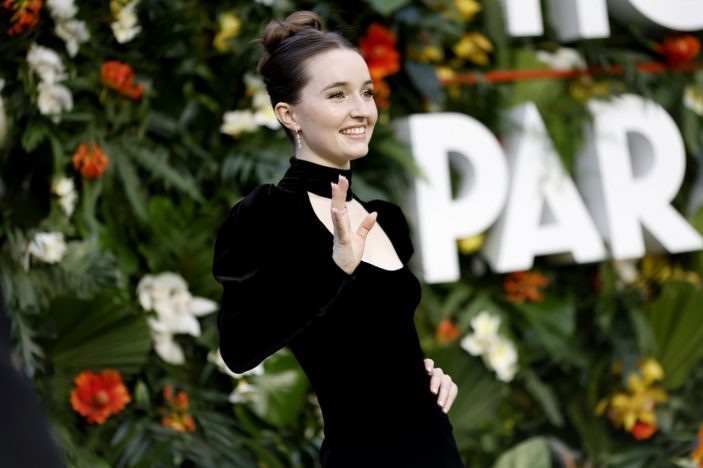 At only 25 years old, Kaitlyn Dever is already over a decade into her career. From Bad Teacher(‘s pet) to Booksmart by way of Beautiful Boy, the Golden Globe-nominated actress is now navigating a genre she has yet to tackle; the romantic comedy.

Starring alongside Julia Roberts and George Clooney in Ticket To Paradise, where she plays their headstrong daughter who defies their expectations by becoming engaged whilst on a tropical holiday, leading her bitter, divorced parents to shack up and play nice in hopes they can change her mind, Dever is aware that she was stepping onto a set with two titans of the industry, something Peter Gray spoke to her about ahead of the film’s global premiere, where she also touched on filming in Australia and what advice she’s taking away from her co-stars.

I’m a born and bred Brisbane boy, so I have to ask how was it for you filming in Queensland?

I had the best time in Queensland.  We started the film on Hamilton Island, and then the second half of the movie was done in Broadbeach.  It was just so, so special there.  I loved it.  Billie (Lourd) and I we’re spending a lot of time together, we were friends before this movie, and we were just going on adventures throughout Queensland.  I was at Broadbeach a lot on the weekends.

But I genuinely (felt) like this does not feel like a job.  Most of the time it doesn’t feel like a job (laughs), but this one in particular really felt like it wasn’t.  I was just on vacation.  And it was the best.  Even my first day I got on a speedboat and we drove to all these little islands.  We were shooting on Hamilton Island, but there was all these little islands surrounding we were just popping over to.  I rode in a helicopter for the first time on this movie (too) which I was not going to do and I was just refusing it up until a point where I was finally convinced and I just did it.  And it was amazing.

The film obviously leans into the tropes of the romantic comedy genre we expect, but at the same time your character kind of defies some of the characteristics we expect.  Was part of the appeal knowing you were playing a character that had her shit together?

(Laughs) Yeah, it was really nice.  It was definitely something that was an element of what drew me to the movie and to the role.  I think I’ve never (really) played someone like her before.  And that was exciting to me.  Yes, the film leans into those nostalgic rom-com tropes, but I think Ol (Parker), our director, his writing is still very natural and organic, so it doesn’t ever feel forced, especially with (George and Julia).

They’re so effortless with the way they perform, and especially when they’re together.  It just is the most refreshing to watch in person.  What attracted me to play Lilly was that she was very put together.  Very driven, very mature and, usually, very conscious in (the) decisions she makes for herself.  She makes this one decision for herself throughout the course of her journey within the film and that was something I admired about her. 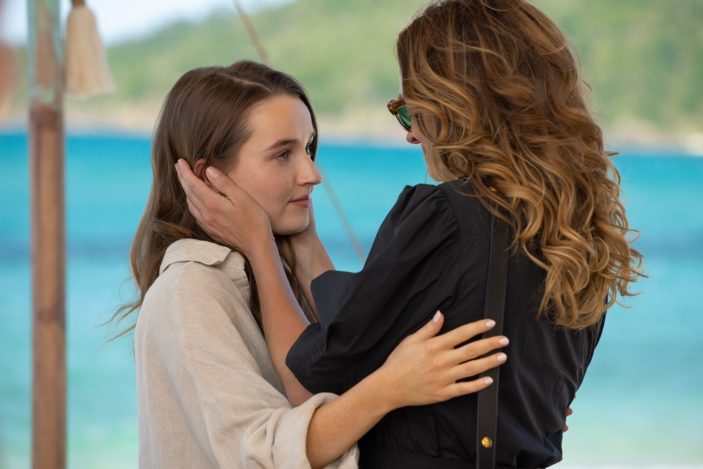 You were saying that you got to watch George Clooney and Julia Roberts’ chemistry live in person, and I must say that I feel that yourself and Billie Lourd have this beautiful dynamic and a wonderful back and forth.

Thank you so much.  Yeah, working with Billie again was truly the best ever.  She is so brilliant and her character in Booksmart is literally just iconic.  And I think that she’s an iconic person in real life life.  We had the best time making this movie.  It’s a rarity to get to work with people that you’ve worked with in the past again.  It’s not taken for granted.  We’re going to continue to find projects to work on together because (this) was just so much fun.  We didn’t get a lot of one-on-one time on Booksmart the way we did in this movie.

And you have cinema royalty in George Clooney and Julia Roberts there with you.  How were they to be around.  Did you get any advice?

Oh, just being around (Julia) and her presence is just a masterclass.  There was so much learning every single day.  I think a lot of it was subconscious things that I’ll take with me down the road, but really witnessing how she interacts with people on set and the way she approaches acting was something I really respected.  It’s a dream.  She’s a legend.

(And George) he’s such a force.  He is so nice to everybody on set.  He’s the guy that’s helping people get off the boat.  He’s helping the grips lift (equipment) and carry around on set.  There’s so much going on on sets all the time, and what I noticed every day was that he was just so helpful and kind and generous with the cast and crew.  And that goes a really long way.  What I noticed about him (too) is that he just loves making movies.  He’s been doing it for so long, but it seems like he is just so passionate about filmmaking in general.  It was easy to do scenes with him (too), because he’s so loose and effortless and you believe everything he says when speaking.

Next to Julia Roberts, you’ve worked with some truly formidable female players.  Toni Collette, Cameron Diaz, and Amy Adams, to name a few.  Is there one performer that you would love to work with?

Oh, gosh.  I’ve been so lucky with the people that I have worked with.  It’s crazy.  I would love to work with Regina King.  I think she’s amazing.  Obviously, you know, Meryl Streep.  That would be insane.  She’s an icon.  There’s so many people I want to work with, but I’ve been very lucky in my jobs so far.

Ticket To Paradise is releasing in Australian theatres on September 15th, 2022.