Interview: Harvey Guillén on finding his voice for Puss in Boots: The Last Wish; “It’s freeing and yet it’s terrifying.  And I love both of those feelings.” 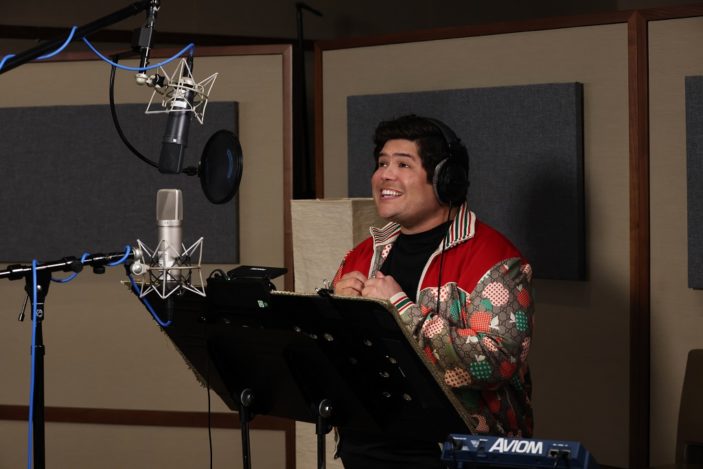 As Puss in Boots: The Last Wish arrives in theatres (you can read our review here) to reintroduce us to the Shrek franchise’s feisty feline and his last-life effort to regain the 9 lives he mistakenly took for granted, Peter Gray spoke with series newcomer Harvey Guillén about finding his voice for his character Perrito, an eternally optimistic pup, how making a joke led the character’s realisation, and (not) working with such a powerhouse ensemble.

I’ve spoken to other actors who have done voice work before, and some of them talk of how freeing a process it is, whilst others say it’s incredibly exposing as you’ve got nothing else to hide behind except your voice.  How was the experience for you?

I’d say, for me, it’s a combination of both those things.  It’s freeing because you can try things that might sound ridiculous when you’re doing it in a live action production, but as an animation it’s your voice and you can be as free as you want.  You can find a difference voice that is obviously not your natural voice.  For (my character) Perrito, I found his voice to be an octave higher than mine, so it was very freeing, but also very terrifying because it’s so much energy to keep in that register.  Also, to be engaged and acting out through your voice, because, as you said, you can’t rely on your body or your facial expressions, it’s all your vocal cords.  Your instrument is your voice and you have to tell the story just through your voice.  It’s freeing and yet it’s terrifying.  And I love both of those feelings.

You’re working with some incredible actors here.  Did you actually get to meet any of them? Or do you just one day find out, “Oh, I’m voicing a movie with Florence Pugh” and you have no idea?

Yeah, pretty much like that.  I think it was halfway through filming when I asked who was playing the other characters.  That’s when I found out, because we didn’t really get to shoot or record with each other.  We recorded this during (a) crazy time in the world and whatnot, so to do it safe was the best thing to do during a pandemic.  You’re safe in a box, in a studio, surrounded by glass (and) someone is behind 8-inch glass and they’re talking to you through a speaker.  You’re thinking it’s pretty good and you could do it all day.  And we did.

It was wonderful, but it was not doable for sessions together (with the cast).  We were all in different time zones.  I was in Canada, Salma (Hayek Pinault) and some of the others were in London, and Antonio (Banderas) was in Spain, so all different time zones.  But when you look at the film you would have guessed we were in the same room every day, and that’s all credit to the director (Joel Crawford) who kept the train in motion and made sure he got the best performance from each person that would blend the best together.  It worked out.

The audition process for animated films fascinates me.  What was that process like for you?

For me, it was an invitation to audition, so that’s already an honour.  Like, “it’s just an honour to be nominated” (laughs).  I was cordially invited to audition for Puss in Boots: The Last Wish (laughs), so that alone was a win for me.  I did a take in a Zoom session and then they asked to see me again, and I just thought that they probably have notes for me or something, but then we Zoomed again and they told me I got it.  I didn’t tell anyone that I was doing it, because I didn’t want to jinx it, because you just never know…they might realise that I’m not right for Perrito.  They could recast halfway through.  You just never know because this business is so fickle.  You never count your eggs or chicks until they hatch, or whatnot.  I’m still thinking that I’ll show up to the theatre and it’s going to be somebody else’s voice.

I can attest that it is your voice.  Or, at least, your name is in the credits.

Oh, good! I can report back (laughs).

Were there any quirks that you personally put into the delivery of Perrito? I know you said you were an octave higher, but how do you decide where to go as a character? Does the imagery inform you?

Yeah, I think so.  There are things that I do out of character, just in my everyday life, where I’ll make a voice or something, or I’ll read something off a sign and just have this different inflection, or presentation of it.  For me it was the line of “Team friendship”.  It was just the way I read it that it was something I’ve said before, in another wording.  It was just the way it came out.  I think I said it as a joke, and at the end of the take (Joel) was, like, “That’s funny.  Do that again.”  I was joking, but I did it again and that gives you the freedom to say the things that you might be saving.  Even if you think they’ll never use this, you just put it out there.  They’ll use the stuff they want to use, so I’ve made it a rule to just put (everything) out there.

So, that one line is almost what inspired Perrito?

Well, the way I came up with the voice for Perrito was my sister has two dogs, and one of them is really calm and loving and soothing, and the other one is hyper and bigger.  I kind of credited Picasso the dog for that.  I always make voices for animals or babies.  Like, when you see a baby and wonder what it would sound like? If they talked right now, what would their voice be like? What are their goals?  When I finally got to see a little bit of the animation we were still working on the voice, and then I found (Perrito) in that register.  It’s less intimidating.

For some reason, when it’s a higher register it’s more welcoming and more endearing, as opposed to someone who has a lower register.  I do other characters in that register.  I do Nightwing (in Harley Quinn) (then changing his vocal tone) it’s in a deeper register.  But that’s because he’s brooding and he’s just down there all the time.  But with Perrito, he’s so optimistic and lives in this bubble of brightness and positivity, and when those colours are so bright and soft you live in that upper register.  It’s in the mask of your head, not in your throat or gut or belly.  They live up there because it’s always uplifting, so I felt that register was better.

Puss In Boots: The Last Wish is screening in Australian theatres from Boxing Day, December 26th, 2022, following advance screenings December 16th – 18th.  It will be theatrically released in the United States from December 21st, 2022.