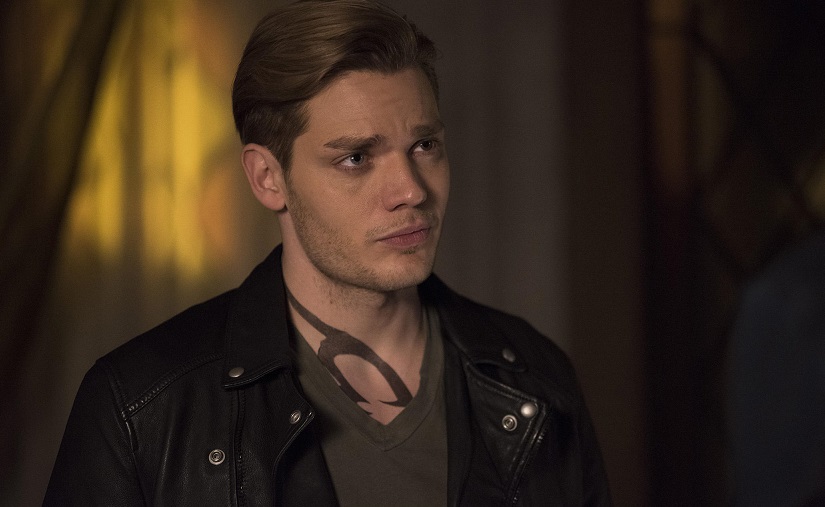 British actor Dominic Sherwood has been setting young hearts aflame for the last few years in the Netflix series Shadowhunters: The Mortal Instruments. However with the show having been announced as Season 3 being its last, an outpouring of grief and demands for it to be picked up are the resounding cries across social media. Unfortunately not all shows can be saved from the chopping block, and its fate appears to be sealed.

Despite this being bad news for fans, Sherwood has taken it in his stride. Prior to his arrival back onto Australian shores for the Brisbane and Sydney Oz Comic-Con events, we had a chat with him about the love and support from the fans and also some first world hair problems.

The show has been Sherwood’s longest running project and for a young actor, a TV series can be one of the best training grounds. Offering an opportunity to get comfortable in the skin of a character, whilst also teaching the importance of working in and amongst a crew, and having to pull your weight to ensure the work gets done. Sherwood elaborates on the things he learnt from his experience on Shadowhunters that he feels has helped him become a better actor.

“From the point of view of just strictly acting, and what that artform has become, to me there’s a lot about this business that I didn’t really understand, especially in TV, because I hadn’t done TV in quite a long time. There’s a lot more about this business that I’m now starting to grasp a little better. And then, from the point of view of actual performance, some of what Jace had to go through was so incredibly difficult, that a lot of those times we didn’t have a huge amount of time. Whether it was physically learning these fights or emotionally getting into the right place.”

“From that point of view, I’ve sort of learned how to pull it out of my ass when I needed to, because sometimes we just didn’t have any choice. There were times when we’re losing daylight, or we have a night shoot and the sun’s coming up and you just have to get that take done there and then. It’s almost like theatre acting, because you don’t really have a second shot at it, because this is the only time we’re going to do it. I have to learn how to do that quite quickly. But, when you have a cast and a crew around you who are so supportive and amazing, it makes it a lot easier because you’re just being supported constantly. It’s a great lesson to learn with great people.”

It’s intriguing then, with the fortune of hindsight, and now with the ability to look back on his time playing Jace Herondale whether or not there would be something he would’ve liked to have changed about the character, be it physical, emotional or mental.

“Season 1, and the beginning of Season 2, we had some hair issues. Some pretty drastic hair issues. It got very long by the end and Jace is very in and out of. Because we had taken the sides so short there was nothing – this is the most cosmetic conversation that we were ever going to have. It is definitely the most cosmetic conversation that I’ve ever had. Towards the end was when we kind of had a problem because it was hot, so it was sweaty and with all of the product they were putting in my hair, we’d have to pin it back. There was no weight in my hair to keep it back and off my face. They were very clear that they did not really want hair in my face at any point. In Season 2 we just kind of gave up on that concept, and we were like “look it’s going to end up in his face and it’s going to happen”. There were times when my hair was so sprayed and slicked backwards that it honestly felt like a helmet. So maybe I would’ve changed that possibly, the hair was a bit of pain in the ass for some time.” 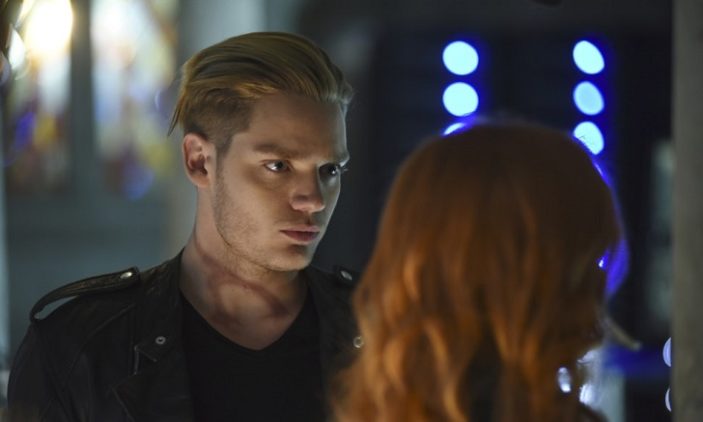 But, if we’re being a little more substantive, the one thing that can’t be changed or denied is the deluge of support the fanbase has shown since the cancellation announcement. It’s never pleasant for those working on the show to have to find new employment. However, Sherwood feels grateful that the sting of the cancellation has been overwhelmed by the love.

“Having a strong support base in any avenue in the world is so fundamental. I think that a lot of what we’ve seen over the course of the show, a lot of the issues we deal with, are real issues that young people are going through in the real world. A lot of what we have seen is that people really struggle with who to talk to about it all. I’m 28 now and I still do the same thing. People go through the same break ups as me. Maybe my story is a little different, and who do I talk to about it?”

“I think that the wonderful feeling of having all these people who support it from all over the world, all different avenues, from different countries and different places is just wonderful. Because, it’s really a nice, heartwarming moment in the world, where really we do need unity; we do need a sense of togetherness because it seems more and more every day I watch the news and people are trying to tear apart from each other. Or the powers that be are trying to tear people apart. I think it’s really important that we, as group of people, stick together and look after each other and make sure that everyone is happy, healthy and successful. That’s what this has really epitomised for me. The fan reaction has made me feel that there’s hope out there.” 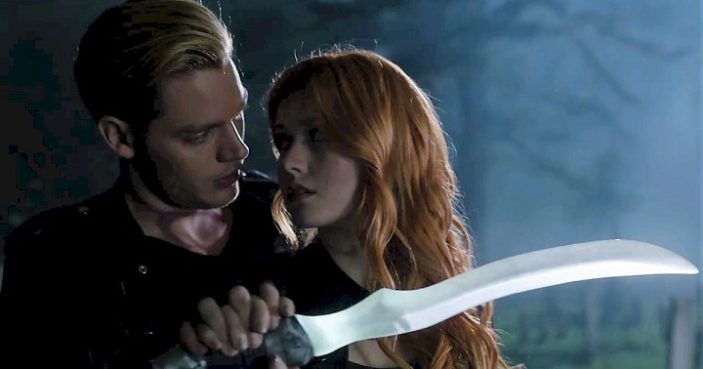 The support can also be attributed to the show’s diverse casting and representation of LGBTIQ characters on screen. Shows like Shadowhunters, tap into an audience market that are specifically looking to see their community being shown. Something that was acknowledged by cast and crew alike.

“It’s happening more and more with media which I think is fantastic; that there’s proof that people are being represented in a positive way. Where before, essentially they were represented in a negative, stereotypical way which is incorrect, because there aren’t just one version of people. There isn’t a stereotype for any of these groups, they’re people. Every single person is different. You have a different fingerprint; you have different irises; you’re different people. You are individuals and that’s what makes individuals and the collective so beautiful is that no one is exactly alike.” 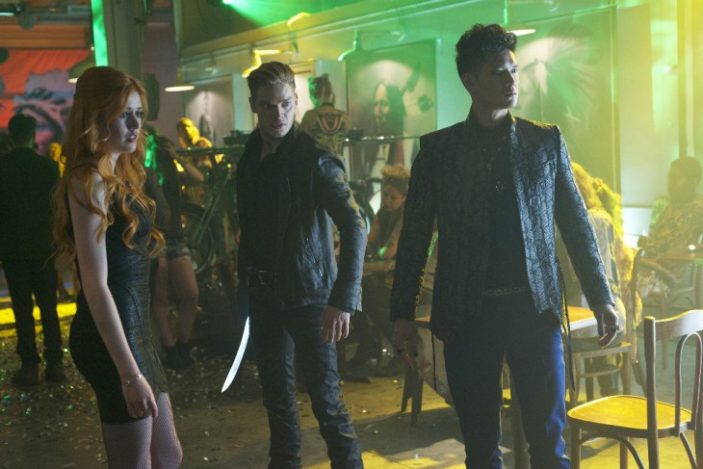 For those who may not be familiar with the ~aesthetic~ of the show, think goth supernatural demon hunters, lots of leather, crazy weaponry, and magical rune tattoos. The tattoos of course serve a purpose in the show, and it’s no surprise that Sherwood has had some fans approach him at conventions with these same symbols tattooed, though one particular fan took him by surprise.

“Yeah. We’ve had a few that have come up here and there, and then I just had one recently where someone got my face tattooed on them pretty big, which is a little scary. The runes from the show is cool, but my face, I don’t really know why anybody would do that. It’s very flattering but I hope they got post-makeup Dom rather than pre-makeup Dom, because otherwise that’s just a shitshow. Oh sorry, I don’t know if I’m allowed to say that!” 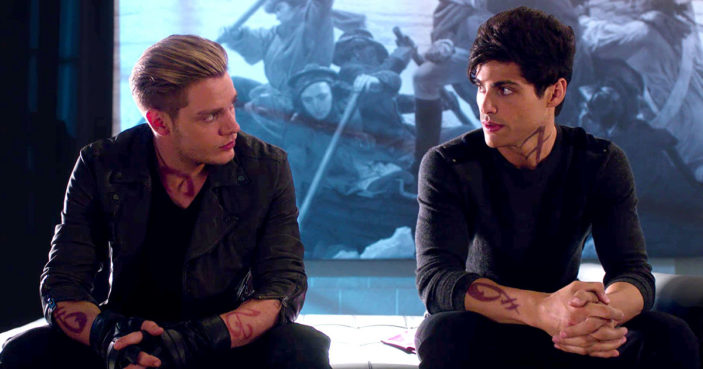 Fans needn’t worry too much about Sherwood’s future prospects though. He’s not really allowed to elaborate but he reassures us that he has some projects lined up for future work. So obviously fans will want to keep track of him on his social media for those announcements.

“Correct. There are things coming up, and it’s important for me and my team that we make the right choices moving forward, career wise. There are some things that came in that weren’t exactly right or things that I didn’t necessarily want to do on the back of it and on the back of what I’ve done so far in my career. So it’s important we make the right choices moving forward but yes, there are very bright things on the horizon but unfortunately I am absolutely not allowed to talk about them. But the love of my life is this career, so I will not be gone, I will not be disappearing into the world. I don’t know what I would do if I wasn’t an actor, I’d probably be unemployed and I’ve done my fair share of that ”

To meet Dominic Sherwood and his fellow Shadowhunters star Matthew Daddario, as well as a whole heap of other guests check out the Oz Comic Con official website.