Fans of the Taken series (or anything with the action genre badass Liam Neeson) will be excited to hear that a new action-packed thriller featuring the acclaimed Irish actor will be soon released in Australian cinemas. Cold Pursuit, a film based on 2014 Norwegian film In Order of Disappearance, follows Neeson’s character Nels Coxman, a snowplow driver whose son is murdered by a drug dealer and his death disguised as a heroin overdose. Now, Coxman must hunt down the dealer (Tom Bateman) who took his son from him, all the while keeping everything under wraps from an investigating detective (Emmy Rossum).

Here at the AU Review, we have been lucky enough to spend some time with the film’s director Hans Petter Moland (who was also the director of the original Norwegian film) and to ask him some questions about the filming process, the film itself and what it was like to re-direct.

What was it like remaking your original film, In Order of Disappearance, into an American movie?

Actually, it was quite fun. I hadn’t originally planned to do so, (but) the morning after the original premiered in Berlin, I got several calls about buying the rights. And then as things evolved, Liam saw the movie and Michael Shamberg, who’s my producer, suggested that I do it myself. His argument was that the tone of the original was such a vital part of what made that film work. It was not just, you know, some film with a lot of clever plot twists or whatever. That forced me to think about it, and then obviously a chance to work with Liam, who is a terrific actor, was certainly attractive.

When was he on board?

I forget exactly the sequence. Movies are put together in very sort of complex ways and they’re not very linear processes necessarily. But I’m sure they could have made that film without me. I think it’s much harder to make it without Liam. Without me, they could find somebody else to direct. And then I just started thinking that: “If I had made a successful theater production in Norway and was asked to take it to New York and to Broadway, would I have done that?”. And the answer is, probably “yes”.

We like to think that films travel globally, but certainly Norwegian-language films don’t travel as far and as wide, even if they’re sold to 50 countries like this one was. So, a chance to make it, or utilize the material to make a film in a new cultural context was kind of interesting if I looked at it that way. And I am put together in a stupid, silly way I guess, and when people tell you that conventional wisdom is ‘don’t remake your own film’, then I was curious about, (the question of) why? So it was kind of an evolving question. But once I made the decision to do it, it took on its own momentum. You have to start doing research for different things, and all of a sudden it didn’t feel like a remake at all — it felt like a new movie. 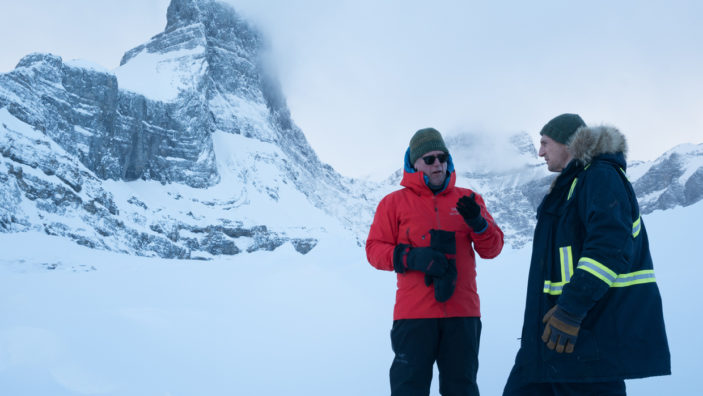 So you were talking about cultural differences. Humour was a vital element of it — were you at all worried that you wouldn’t hit the American sense of humour?

There are plenty of things to worry about when you make a movie, so that certainly could be one of them. But… your desire to succeed has to be greater than your fear of failure, otherwise you get just so paralyzed by all the complex ways that you can fail in making a film.

I lived in the states for 10-11 years, although I was much younger, but at least I felt comfortable and quite attuned to American culture, so it wasn’t that big of a deal. Obviously there are some cultural issues that are different in this country. I think people swore a lot more when I lived here. I lived in New York in the ‘70s and ‘80s and it was a pretty rough and tumble place. (It was) a lot of fun, but (there was) also a lot of sort of really deadpan, raw humour. “I think a lot of that’s gone out of this culture, and in a way that kind of gallows humor, you know. New York had gone bankrupt and people were just getting by. It also has been part of my formative years.

How do you compare them in your mind? Are you happier with one of your films than the other?

I never look at films once I’m done, because I like to think the films that are ahead of me are my best ones. I look at them as experiences, because making films is a chance to explore things, and to really deep dive into things that you often don’t know that much about. Obviously, here, I knew a lot about it, but not all of it, so you get to do a lot of research. You get paid to actually mine issues or get to know people in order to make something work.

I’m very happy about the original; it’s done wonders for me. Obviously, it’s pleasing when people see it and respond to it. I want people to see my films. I’m also very happy about this one. It’s been a process where I’ve been allowed within the context of a big commercial film to direct as best as I know. I hope it will connect with a wide audience and that will contribute to my happiness about it as well. But, you know, I’ve done my bit.

When you are making a film, what’s your favorite part? Is it preproduction or shooting or the editing room?

When you write a film, that’s like one kind of luxury. You’re by yourself and you get to use your imagination in one way. And then when you shoot, there’s a lot of energy and a lot of adrenaline attached to it. It’s quite intimate because you get very close to people very fast, and that has an attraction too. It’s terribly exhausting. It’s like a marathon, and it just keeps going and going. The intensity of it, and the joy of feeling alive and together with other people, is something I find extremely attractive. So that appeals to another part of my personality.

It’s almost like… a high is the wrong word, but it certainly absorbs you both mentally and physically in a very exciting way. I guess it probably can be compared to being at war where you are with your comrades, and (there is) just a sense of achieving something from all this mayhem, of moving heavy equipment, and you go on to extract some little moment of genuine life. You feel very much alive.

As it evolves, editing is such a cerebral exercise. I love editing, but it also is terrifying in one sense because the gravity of your decisions is so big and it’s almost like three-dimensional chess, which is very dynamic because it’s not on the board. It’s so consuming, mentally, to the point where I dream about it and wake up and am in the midst of it. It’s completely absorbing, but also extremely satisfying when it works, to throw something out and juxtapose two things, and a spark flies that wasn’t there before.

I think there is a misconception, speaking here about remaking it, it’s not like painting by numbers. There are human beings that are being moved around, actors. You can’t just plug and play or use cookie cutter approaches to them. They have to bring their personality and their life to it, and all of a sudden it starts to fly and levitate in a different way. And you have to go with that. You have to embrace the new life that’s brought to it. There are some things always that you are disappointed with because you didn’t feel like you were at your best, or other things that you were gifted with, like a performance that just blows you away.

The film touches on a lot of serious subjects even though it’s very funny. Is dark humour your way to deal with these things?

It always has been my whole life; the way to deal with difficult things. I mean, without gallows humor, I don’t think I would be where I am today. But I think in observing life in general, I think in the most tragic of circumstances, not for the people obviously in the midst of it, but there are often elements of humour, and that’s part of life. Humour and tragedy often goes hand in hand, and observing it and perhaps even allowing it to be there, can make us survive even the most dire circumstances. We’re imperfect and we shouldn’t chastise ourselves for being imperfect.

How important is the cinema-going experience for you as a director?

I think most people undervalue the benefits and the pleasure of going to the cinema, because they forget that when we sit in the cinema, we share with strangers and friends something — or occasionally something — grand and very universal. It makes us feel alive as human beings, and that’s not the same as a sitting at home and seeing it on the beautiful TV screen. It’s going out and engaging with other human beings. It’s important that we are social beings. But cinema will survive because we are social creatures. We like to go out.