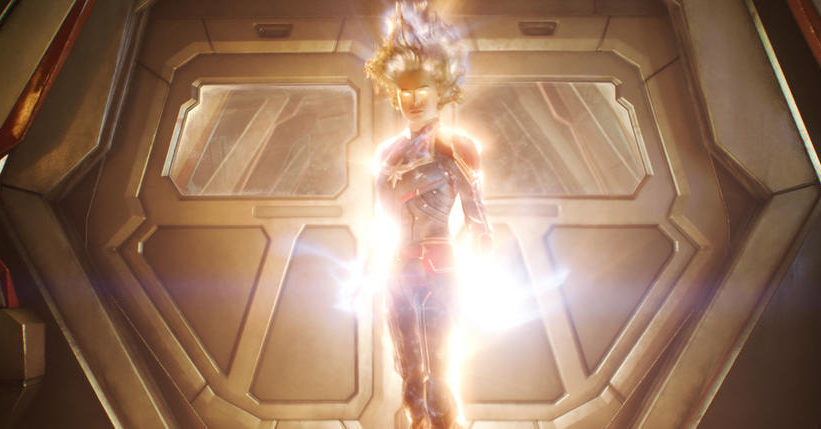 The Marvel Cinematic Universe (the MCU) doesn’t just regularly bring together a connected group of actors on screen – but also the creatives behind the scenes, regularly working on Marvel projects that help connect the universe in more ways than just the themes that tie it all together. One of these hard working artists is VFX Supervisor Chris Townsend, who has no less than five Marvel films to his credit. The latest, Captain Marvel, just hit home release, so I caught up with him while I was in New York City to learn more about his process, working with Australian VFX companies and what it took to bring one of the highest grossing films of all time to the screen.

You worked with the Australian VFX company Rising Sun on this film, and as we speak this afternoon, they haven’t even started their day yet. What has your experience been like working with Australian companies over the years?

How much sleep do you get dealing with all those time zones?

*laughs*, yes, I often work very long days in post. The day starts with our partners in England and Germany, then onto Montreal and California where I’m based, and then Australia and New Zealand at the end. We’re all over the map, literally. So we stage our days appropriately. I think everyone in the business understands we have time constraints, so everyone collaborates to make it work. For me, I spend 12-14 hours a day on camera, giving notes and reviewing, then presenting to the studio.

How much control do you have over when the Studio sees the work?

In my role I’m a conduit for the design. I’m hopefully being hired for my design aesthetic, but ultimately I have to get inside the Director’s heads; getting inside to know what they want. And the studio heads too! I need to figure out what they want and I try to give it to them. When I feel like we have something cool and want to show it, when we need to get direction, or when I think we’re done, I’ll show. If I tend to think it’s not ready, then I don’t present it.

What differed in this project versus the other 4 MCU projects you’ve worked on?

Each film brings a unique sense of challenges, with Captain Marvel it was in the naturalistic approach. We were going for more of that analogue, organic film style. The directors are indie, and they have that character in their films. It wasn’t trying to be a splashy visual fix spectacular. They wanted to balance the naturalistic film making with the big action scenes. Every film is different but you learn from one film to the next.

The de-aging processes were pretty remarkable – and a lot of that I imagine comes from having the right shots in camera. Are you and fellow VFX supervisor Janelle Ralla on set to help make sure you’re getting all the information you need?

We are. My attitude towards VFX, and I’ve been fortunate to working with an empowering group, is that the answer is always “yes we can, now what’s the question?” But we’re at a stage where you can make anything work with the time money and resources. So on set I try to watch, and if Sam (Jackson) is stooping too much, we’d say something, to make sure he was acting younger… we had him eating a sandwich, and running and doing things that one day maybe we couldn’t have done, but now we can. Those shots are just harder, but no longer impossible. Janelle was the perfect person to make it happen, coming from Benjamin Button etc – there’s such incredible artistry that brings it all together – from the actors and the artists like those at Rising Sun and of course Janelle. We also need to take incredible care to not step on the performance.

During your time on the MCU, you have been enjoying so many technological advances. Even when the MCU started there must have been some sequences that were ruled out or deemed too difficult compared to now.

Absolutely, skills and artistry has gotten better, that improves everything, as does technological improvements. The people are artists, not just button pushers. People are getting better so we’re all getting better. We learn from experience. To make it look better, we know to try it this way and not another way. Things are tremendously better now than they were when I worked on Captain America, when we did “Skinny Steve”. Would we do that differently today? We wouldn’t do it differently, we’d just do it better. It was incredibly challenging but so was Sam (Jackson, in Captain Marvel).

I’m incredibly proud of the work we did. We have the advantage of Sam being in the film a lot, because we don’t want anyone to think about it after the first shot. So much goes into that… the subtle differences we focused on, every small consideration was made to make it look real.

I had the chance to explore Star Wars Land a couple of weeks back. I have to wonder what it’s like getting to wander around physical worlds you developed in a computer. Of course there’s also the Guardians of the Galaxy ride, which I imagine features some of your team’s handiwork.

It’s tremendous. I’m so privileged, working on these pop culture films and being a part of that. We have to be respectful of that universe. And it’s tremendous to see the physicality and people experiencing it. It’s great to have these entertainment environments, to overlap with the films.

Do you have a favourite superhero film you haven’t worked on?

Christopher Nolan’s Batman is very cool, I like them and Iron Man in particular, because they’re normal humans. I love origin stories, too, it’s why Captain Marvel was great. Introducing Vision and Scarlett Witch in Avengers 2, was really fun too – as was Guardians Vol. 2 – but they were following on from other films, and you were maintaining it. Getting to work on a project where you’re creating a look and feel for it and all the films that follow it. That’s really special.

Captain Marvel is available now on Blu-Ray, DVD and Digital.