Game of Thrones: Five things we know about The Battle of Winterfell

It doesn’t seem like enough to just say this next, third, episode of Game of Thrones Season 8 will be ambitious. Plenty of things in this day and age are ambitious: jazz-rap concept albums from chiselled Compton emcees; some absolutely fucked mutant food hybrid, likely involving Nutella and doughnuts; millennial media start-ups that are so much “woker” than you. Perhaps a better word for this coming episode is unprecedented.

The third episode of Game of Thrones Season 8 will be unlike anything that has come before it. At least that’s what we are being led to believe, and given the show’s almost always made good on their promise of epic, news-smashing events, there’s no reason to doubt these claims.

As hype reaches fever-pitch, let’s recap on what we know about the episode so far, especially juicy tidbits coming from this Entertainment Weekly article, from a writer who was seemingly on set when the great Battle of Winterfell was being filmed.

Be warned. What follows can be slightly considered spoiler-y 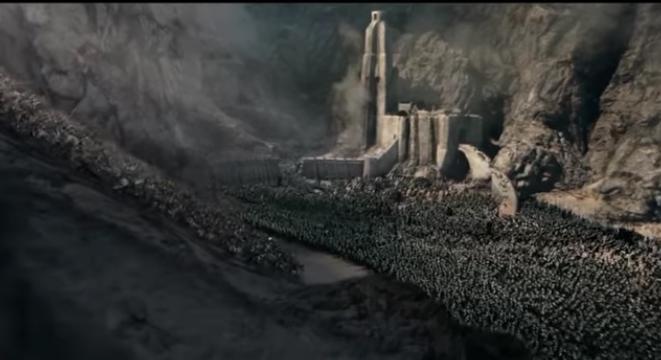 One of the main talking points about this coming episode has been that it features the longest battle sequence ever committed to film. But what does this mean? Will the entire episode be swords versus ice spears and wights, or will we have time to breathe between jabs, stabs and squishy dying sound effects?

In addition to trying to tell the battle from multiple perspectives, episode director Miguel Sapochnik (“Hardhome”, “Battle of the Bastards”) sifted through the entire history of cinema to try and find a battle sequence longer than the one planned. He couldn’t. The closest was the famed battle of Helm’s Deep from The Lord of the Rings: The Two Towers), which clocks in at almost 40 minutes.

So we know it’s longer than that, at least.

Miguel also used Helm’s Deep to try and tease out the psychology of battles and the audience viewing them. Is there such thing as too much battle? Do audiences get “battle fatigue” from all that hack and slash?

“One thing I found is the less action – the less fighting – you can have in a sequence, the better”, Sapochnik told Entertainment Weekly, which would indicate that, as with GoT’s greatest fight sequences, a lot is probably going to be broken up with clever splotches of drama.

That aforementioned Entertainment Weekly article includes a nice little insight into the action on set, where John Bradley (who plays Samwell Tarly) is swinging a sword at some wight stuntmen. Humourously, the scene needed to be re-shot because Bradley looked like a “badass”, whereas that is not at all in-line with his charmingly nervous character.

So obviously Samwell joins the fight at some point, perhaps trying to protect Gilly and Little Sam from undead wights in the crypt?

Dubbed “The Long Night” by a crew of up to 750 people, the Battle of Winterfell (we’re just calling it that, no official episode title has been released) took around two and a half months to shoot. This includes 11 weeks of night shoots, in sub-freezing temperatures, ankle-deep mud and icy rain.

The crew affectionately dubbed the shooting process “The Long Night”, and even wore jackets reading “We Survived The Long Night” after it was all wrapped up. 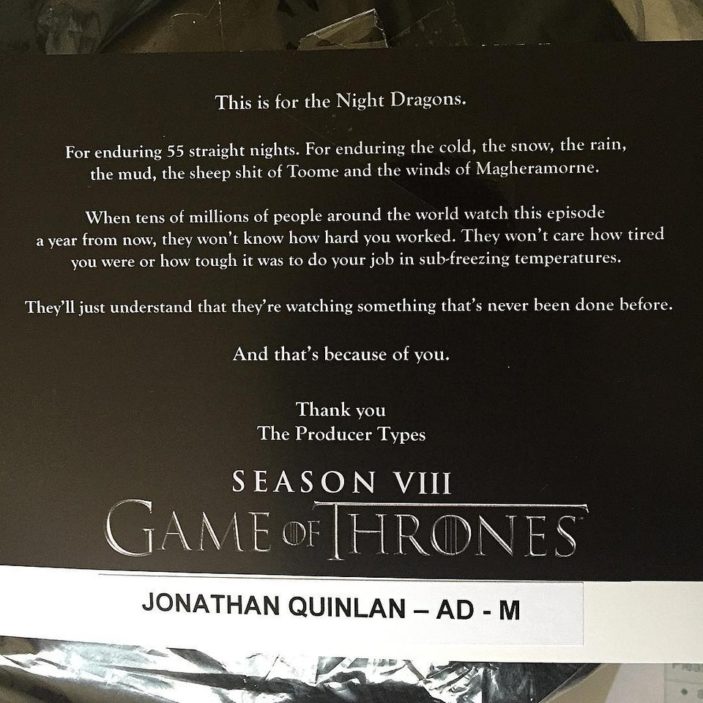 There’s also this letter from the production team to the cast and crew. It’s assumed that it also refers to the Battle of Winterfell shoot, but the time indicated falls a bit short of the conflicted “two and a half months” and 11 weeks. Perhaps it’s referring to a smaller pocket within that whole process.

It Is A Work of Art

Talking to Entertainment Weekly, co-executive producer Bryan Cogman – who also wrote “A Knight of the Seven Kingdoms” – seems to suggest that part of the reason why this battle is so unprecedented is its artful approach to blending genres.

“This final face-off between the Army of the Dead and the army of the living is completely unprecedented and relentless and a mixture of genres even within the battle”, he told EW. “There are sequences within sequences built within sequences”.

Considering Miguel’s Battle of the Bastards, for which he won awards, was one of the most visually striking battles in fantasy history, it’s safe to expect a lot of beauty and symmetry among all the chaos of living versus dead.

The Actors Were Physically Pushed To Their Limits

“Nothing can prepare you for how physically draining it is”, Maisie Williams (Arya, in her first real battle sequence) told EW on the set. “There are moments you’re just broken as a human and just want to cry”.

Sound pretty intense? You’re damn right. Those night shoots in particular, in those freezing temperatures with those conditions, would have been completely soul-destroying. Apparently, actors had to squeeze around a space heater in a tent just to get some warmth between shots.

Liam Cunningham (Ser Davos) told EW that the crew were getting 40,000 steps per day on their pedometers. That’s around 30-31km, every day, for almost three months. Brutal.

Iian Glen (Ser Jorah) described the whole ordeal as the “most unpleasant experience” he’s had on the show, whereas Rory McCann (The Hound) bluntly told EW that “everybody prays they never have to do this again”.

Hyped for Monday (Australian time)? Make sure you head on over HERE to see if your favourite character has a chance of making it out alive.