Five films that do magic right

Hollywood’s relationship with stage-magic films has always been a difficult one at best.

From truly enchanting and captivating works, to films where the magic simply falls flat (The Incredible Burt Wonderstone, we’re looking at you), there is no denying that the transition from magician’s top hat to screen hasn’t always been easy.

With the release of Now You See Me‘s second act fast approaching, it’s time to take a look back at five films that succeeded in captivating their audience and did magic right.

Now You See Me

The film responsible for the inception of this list, Now You See Me saw the gathering of four divergent performers, turned celebrity magicians, united under the banner of ‘The Four Horsemen’. Their goal? To right the wrongs of the world through the power of magic and showmanship.

Yes, the plot sounds like B-movie material at best, but the impressiveness of the tricks (albeit mostly CGI ones) and fast paced directing culminated in an enjoyable film, with just enough twists and turns to satisfy most.

Just about everybody’s go to movie when asked for a favourite film from the genre, The Prestige easily earns a spot on this list for a large variety of reasons.

An intricately detailed plot, superbly acted roles (including a mesmerizing cameo by the late David Bowie), and masterful cinematography and direction by Christopher Nolan and his team are  just some of all the incredible aspects on offer in this enrapturing magical thriller. 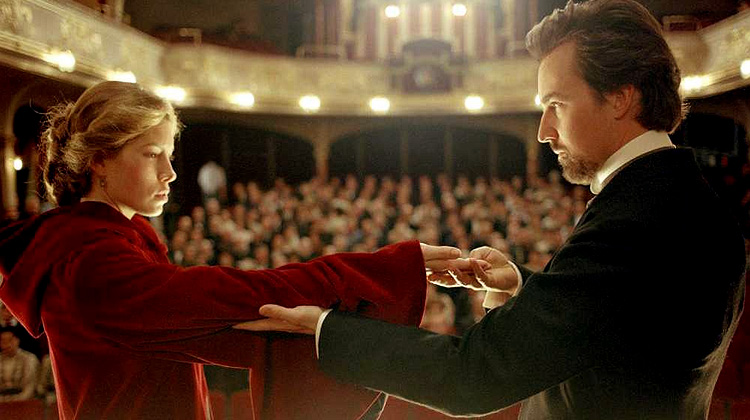 Often overshadowed by The Prestige due to its identical release year and similar time-period setting, The Illusionist stands above the rest due to its ability to weave the tale of forbidden love, royal drama, and mystical magic all in one beautifully romantic and satisfying way.

Its baroque undertones and tense acting further elevate the sense of mystery and illusion that cloaks the film, making it not just a great stage-magic movie, but an instant classic of the genre.

An incredibly sweet, yet melancholic film, L’illusionniste will tug and tug at your heartstrings until they snap in two.

Based off the final script ever penned by the powerhouse filmmaker Jacques Tati, this gorgeously animated tale about a down-on-his-luck magician who befriends a young girl illustrates the reality of a magic act’s lasting appeal and how love for the art of magic itself will only go so far.

Perhaps Ingmar Bergman‘s most underrated film of all time (which isn’t saying much, but still), The Magician perfectly rounds out this list through its encapsulation of stage magic and what it actually means to be a magician.

Filmed at a time when the allure of legerdemain and trickery was at a low-point in society, Bergman’s film about the enjoyment of magic and the subsequent mysteries that follow demonstrate not only his talent as a natural storyteller, but the requirement for magic as a form of entertainment.

Now You See Me 2 hits cinemas on June 9th.