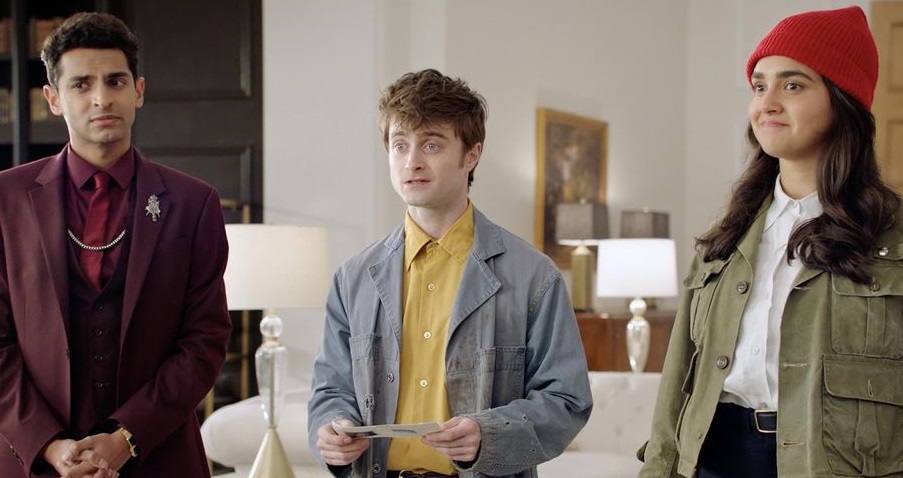 What do you get when you take a reluctant easily distracted God, a bunch of overworked angels and a bet that has the continued existence of Earth on the line? The new 7 episode mini-series on STAN called Miracle Workers, based on the novel “What In God’s Name” by series creator Simon Rich gives us a cynical and sometimes ridiculous take on the concept of Heaven, God, angels and faith itself.

Welcome to Heaven Inc, it’s like an enormous factory that houses all the different departments that control Earth. We meet the passionate go-getter Eliza (Aussie actress Geraldine Viswanathan) recently transferred out of the Department of Dirt to the Department of Answered Prayers. Here she meets Craig (Daniel Radcliffe) who has been alone, toiling away at answering very simple prayers, whilst forwarding on any of the harder or “impossible” jobs to the guy upstairs. The guy upstairs happens to be God (Steve Buscemi), a grey fluffy haired layabout who is a little bit too overwhelmed with all the bad stuff going on with his creation.

Thinking that he’s probably better off wiping the slate clean he decides to destroy Earth. In an attempt to save the planet and all its inhabitants, Eliza offers God a bet, that she and Craig can answer one impossible prayer in two weeks. That impossible prayer just so happens to be to have two socially awkward nerdy teenagers fall in love, and kiss. Something that if you’ve ever been a socially awkward nerdy teenager, can feel in itself out of the realms of possibility. But with a few tweaks of their joystick, pushing a few buttons and never defying the laws of physics, Eliza and Craig have to make it happen, or else.

It’s easy to draw comparisons to competing Netflix’s The Good Place, also another cynical take on the afterlife, but Miracle Workers is a little more rough around the edges. It feels like a workplace office comedy whilst tapping into existentialism, and nihilism. It also definitely pokes fun at the concept of an omnipotent supreme being who has control of everything – whilst also not caring for or wanting that control. Then there’s the poor suckers that have to keep everything going, if you’ve ever worked long enough in an office you’ll probably relate.

There are some solid performances here, Viswanathan pumps Eliza full of a constant perkiness and desire to fix everything, even if that means bending the rules. Radcliffe’s twitchy Craig has been starved of all contact, and stuck in a do it by the book rut for thousands of years knowing only his job. Thus making their initial partnership a charged one so by the second episode it’s easy to see how they are going to rub against and also off on each other.

Buscemi’s God strikes a similar resemblance to The Dude, though he isn’t constantly in a bathrobe but he is swigging a lot of beer. But his lassaiz faire attitude towards his creations certainly puts not only the lives of billions of people and creatures on the line, but the employment status of his underlings. You’ll probably also recognise Karan Soni (Deadpool’s taxi driving Dopinder) playing Sanjay the executive assistant to God, also delivering some good comic relief here as he desperately tries to delegate out work, like any good executive level staffer.

Initial impressions is that there is a lot of potential for this series to deliver some biting snarky comedy that can lean into its faith base. For a show with its premise revolving around the stakes of planetary destruction hinging on the intimacy of young love, it never seems too over the top or unreal. It will be interesting to see whether Eliza and Craig can outwit and outplay their leader in charge or whether the world ends up destroyed and replaced by a lazy susan river planet.