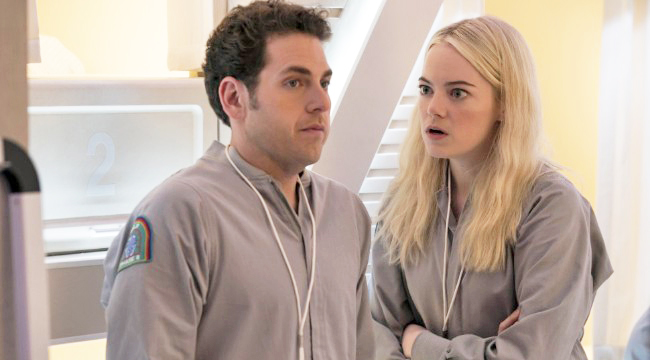 With series like House of Cards and Orange is the New Black, Netflix has cemented themselves as a platform that regularly delivers exciting original formats to binge watch. Well known for giving their writers and directors plenty of creative space to develop new material, series like like Black Mirror and Stranger Things have flourished. And now we have the thrilling Maniac, which playfully exhausts the universe of genres and the boundaries of our imagination.

The miniseries debuted on Netflix on Friday and consists of ten episodes, none longer than 45 minutes. Based on the 2014 Norwegian show with the same name, writer Patrick Somerville and director Cary J. Fukunaga, who is known for True Detective Season One, turn this story into a star-studded drama.

It starts off with a narrated animation of the development of human life, focusing on the coincidence of it all. “All the other worlds, that almost were, matter just as much as the one we’re in”

A quote from the intro gives away what we will be dealing with in this miniseries – the question of what is real and what not. The two troubled main characters, played by Emma Stone and Jonah Hill find themselves in several parallel realities, due to an experiment gone rouge. The dream-like worlds vary from being chic thieves in the 1940s, to Game of Thrones-like fantasy scenes or to leading happy family life on Long Island, making it hard for the participants to distinguish between the drug infused journeys and reality.

Maniac is set in, what seems to be an alternative version of New York City in the 1980s; perhaps one that precedes Blade Runner. We recognise technology, old computers and rusty neon signs, but are also confronted with unfamiliar inventions like small robots cleaning up dog poop, or a new pay system called Ad Buddies – all in what seems to be a multi-lingual society, alternate Statue of Liberty and all.

In the first scene we meet Annie Landsberg (Emma Stone) and watch her as she makes her way through New York City. She appears as a tough and short tempered woman, who we do not know much about yet. The main character Owen Milgrim, is portrayed by Jonah Hill. Owen does not know Annie yet and leads a quiet subtle life in the city. He comes from a rich family of industrials but makes his own living. The relationship to his family, especially to his show-off brothers, is poor and after having had a psychotic episode, the shy man cannot trust his mind anymore.

Owen is possibly schizophrenic but refuses to take his meds and is regularly experiencing delusional moments. It is not unusual for him to see corn kernels turn into popcorn on the bare asphalt, or to have a conversation with a brother, whom only he can see. Said brother continuously speaks of a “pattern”, calls him “the Chosen One” who would save the planet, and tells him to look for the woman who will give him further instructions for the mission. Merely an unstable mans’s mind playing tricks on him, or an odd surreal subplot?

After losing his job Owen takes a risky measure to stock up his funds; an experimental drug test. The drug is intended to erase negative memories and build a new defence mechanism against such moments, to overall minimise the amount of psychological pain humans feel. He hopes for a relief from his mental issues.

In the crowd of applicants Owen notices Annie and he believes she is the woman who his imaginative brother was telling him about. From the beginning on there is a certain tension between the two main characters, hinting that their destinies will be closely entwined in the future. But when Owen approaches her, Annie harshly pushes him away and threatens him.

The test laboratory looks dodgy and the doctors, one very young and continuously smoking and the other one a middle-aged man on drugs, indicate that this medical experiment will not go as planned. The participants are assigned sleeping boxes and get a quick briefing. The episode ends with the doctor staring Owen in the eye shouting, “You don’t fuck this up” – a mirror for his self doubt.

After watching the pilot of Maniac, one will not know what to make of the series. The first episode seems disorientated and will keep you guessing about the events to come, without providing the slightest explanation.

But one thing is clear; this series will neither be pinned down to a single subject nor to a genre. It is bouncing back and forth from sci-fi drama to a psychological black comedy thriller. Already in the first episode, Somerville and Fukunaga strike up several essential topics, like connection between humans, family dynamics, and mental health and will leave you with plenty of unanswered questions. The powerful first episode is a genre-bending masterclass provided by Netflix and will make it incredibly hard not to click the Next-Episode-button, to find answers to the questions posed.

Maniac is on Netflix now.