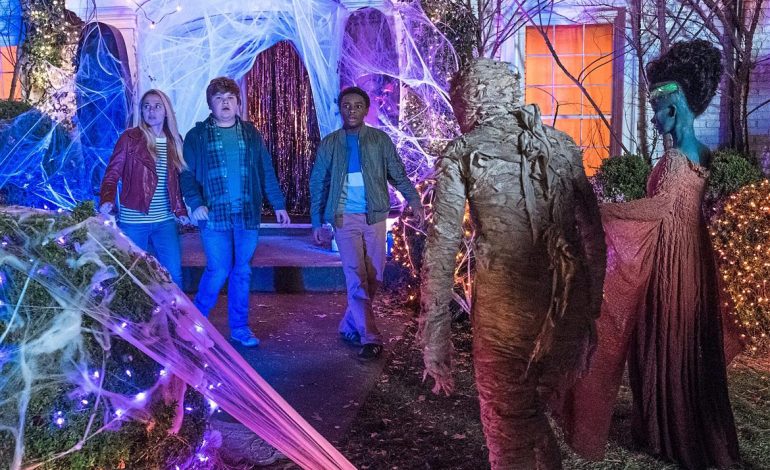 Acting as a nice alternative to the brutality of Halloween, Goosebumps 2: Haunted Halloween, whilst not overly clever or necessary viewing by any means, provides enough chaotic entertainment for the younger crowd (or those young at heart) to earn their own respective scares for the spooky season.

Even though its title suggests its a sequel to 2015’s Goosebumps, this is very much its own product with it having next to nothing connecting it to its predecessor; Jack Black returns as Goosebumps author R.L. Stine though, but even his appearance feels more like an afterthought rather than an organic story choice.

Speaking of story, Goosebumps 2 is very much treading on familiar ground (you could almost accuse this film of being a remake of the first) with the Halloween season coming to life through the pages of Stine’s magically-inclined novels thanks to a duo of nerdy BFF’s – Sonny (Jeremy Ray Taylor) and Sam (Caleel Harris) – who come across a mysterious ventriloquist dummy, Slappy (also voiced by Black), when rummaging through an abandoned house that was once owned by Stine.

Slappy coming to life only momentarily freaks out Sonny and Sam before they come to embrace him as a confidant when he grants them their wishes (so to speak); helping with menial chores like laundry and the PG-friendly revenge on their bullies at school being the extent of their initial fortune.  Given Slappy’s vocals are drenched in OTT-villainy, we aren’t surprised when he turns on Sonny and Sam in his bid to both take over their Halloween-enthused town, as well as latching on to Sonny’s sister Sarah (Madison Iseman) and mother Kathy (Wendi McLendon-Covey) as he craves a family of his own; whilst Goosebumps 2 stays happily within the bounds of its PG rating, Slappy’s plans to transform Kathy into his own dummy-like mother is surprisingly dark.

Though Slappy’s motivations aren’t explained and the story is rife with illogical nonsense, it’s obvious that director Ari Sandel (The DUFF) and screenwriter Rob Lieber (Alexander and the Terrible, Horrible, No Good, Very Bad Day) were banking on their audience not caring of such things, and they’d be correct as Goosebumps 2 delivers on what it promises; I dare say even adults who are doing their duty by accompanying their children will be surprised with how fast-paced and entertaining it proves to be.

Also proving a surprise is the film’s horror element.  One will never accuse Goosebumps 2 of being masterful at scaring its audience or providing a healthy jolt, but it should be noted that there were a few sequences that are likely to prove unnerving to the younger crowds; one involving a series of costumes coming to life in a department store is admittedly effective in its appropriate creepiness.

Suitably acted and enjoyable enough in its vibrant visuals and horror-lite temperament, Goosebumps 2: Haunted Halloween is unlikely to become staple viewing for Halloween (it’s no Hocus Pocus), but you could certainly do a lot worse than this bouncy horror/comedy that’s sure to please fans of Stine’s long-running novel series.

Goosebumps 2 is in cinemas now.