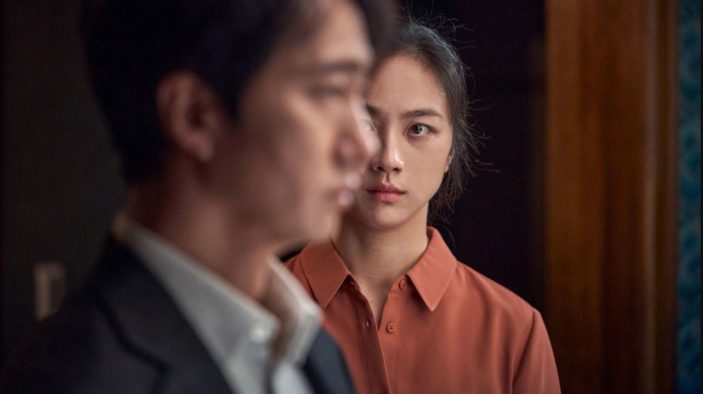 Decision to Leave tells the story of Hae-jun (Park Hae-Il), a city-based, young insomniac small-town detective. He is stuck in an uneventful job where very little crime occurs. His marriage with his restrictive partner Jung-an (Lee Jung-hyun) is without fire and lacking in passion. His only ray of hope is being in charge of a murder investigation where a rock climber has seemingly fallen off a cliff to his death.

The major suspect is the victim’s wife Seo-rae (Tang Wei), a Chinese immigrant who works as a caretaker for senior citizens. Through the extensive investigation of Seo-rae, Hae-jun begins to enter into a path of obsession; leading to a situation where the two develop an alluring attraction. However, the two being together could spell disastrous things so one must have to make a decision to leave or else.

Decision to Leave is the latest film from acclaimed Korean filmmaker Park Chan-wook, after his amazing erotic thriller The Handmaiden back in 2016. His films have always focused on violence and sex through off-kilter relationships between his characters. Whether it would be characters driven by revenge or characters falling in love, Park would always find the peculiar, darkly humourous and ultimately beautiful side to the story. In the case of Decision to Leave, Park has decided to forgo the sex and violence and rely more on feeling and the power of suggestion. Considering the nature of the characters communicating and reciprocating with each other through implication, the subtle approach to storytelling fits the film to a T.

Park and cinematographer Kim Ji-yong (who replaces Park regular Chung Chung-hoon) conjure cinematic magic with memorable imagery that conveys the ennui and obsession of our characters. With clear inspirations using the feeling of sparseness (the expansive wide shots), voyeurism (the numerous moments where Hae-jun spies on Seo-rae), communication (POV shots from mobile phones), hopelessness (POV shots from corpses) and divine intervention (the God’s eye camera shots); Park’s directorial eye is as illusive and enthralling as ever.

His handling of dark comedy is still as sharp as always. The levity ranges from slapstick (Hae-jun bumbles into animal attacks at one point) to circumstantial (using the precinct’s budget on high-class meals for a suspect) to verbal (dialogue that is lost in translation) to macabre (Seo-rae is shown giggling at inappropriately bleak moments as a questionable outlet of expressing grief) and especially romantic (the entire interrogation involving Hae-jun and Seo-rae feels like a dinner date) — and it is all informed through character.

Speaking of characters, Park Hae-il and Tang Wei are both fantastic in their individual work as well as in their shared chemistry as a lead couple. Park has to portray a character that is world-weary, competent, jilted and hapless at once and he does an amazing job here. He takes on the comedy with deadpan accuracy and the drama with understated relish; especially when he discovers Seo-rae’s true intentions and how he fits into the picture.

Since director Park has collaborated with fellow female screenwriter Jeong Seo-kyeong (who has worked with him since Sympathy for Lady Vengeance), his handling of female characters as well as his sense of filmmaking has changed dramatically. Park has become a more romantic filmmaker. Consequently, he and Jeong have created characters that are engagingly flawed and powerfully realised by well-cast actors.

Tang Wei has always been an impeccable performer with a vast acting range (Decision to Leave is not even her first South Korean film) and her work in the role of Seo-rae is one of her best. Her enigmatic presence veers from being lovelorn to grief-stricken to deceptive to cheeky and Tang masters them all (in a second language not known to her, no less) brilliantly. What makes both Park and Tang a great couple is how they are able to convey so much with their eyes; their sense of yearning and longing with interspersed moments of cheerfully non-verbal banter under the guise of unreciprocated love displayed so wonderfully.

Decision to Leave is another winner for Park Chan-wook and it is quite frankly the romantic comedy of the year. It may not have the provocation of Oldboy or the lurid pleasures of Thirst and The Handmaiden. But what it does have is an understated and wondrous sense of assured storytelling that will immerse audiences in ways that is more accessible and it lingers with them long after it is over. Highly recommended.

Decision to Leave is now showing in cinemas, courtesy of Madman Films.