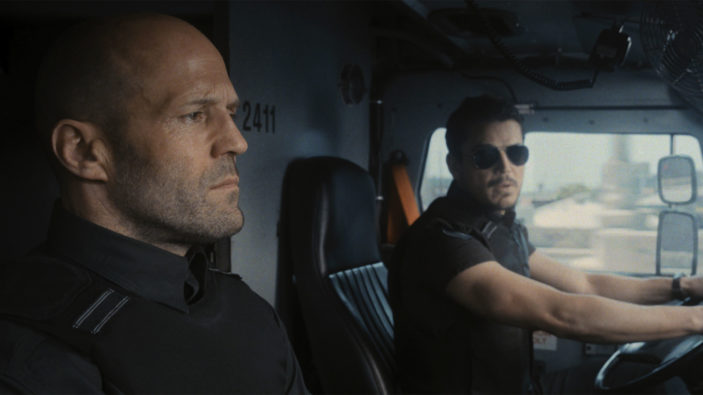 After making a name for himself in the late 90’s/early 2000’s with his distinct brand of British gangster villainy, writer/director Guy Ritchie seemed to trade in authenticity for capital.  The success of such studio projects as Sherlock Holmes and Aladdin seemed to gradually distance Ritchie from his more unkempt beginnings, before 2019’s The Gentlemen seemingly proved that there was still plenty of that violent cheek left within his psyche.

For Wrath of Man, despite being billed as a reunion over 15 years in the making between Ritchie and his former leading man Jason Statham (the two last collaborating on 2005’s Revolver), the filmmaker’s signature flare has been put aside for a more generic, straightforward sheen that very much presents itself as a Statham vehicle as opposed to a Ritchie joint.

That’s not necessarily a bad thing though, as Wrath of Man very much benefits from Statham’s gruff, underplayed appearance; the tongue-in-cheek approach he’s recently taken on in such films as Hobbs & Shaw and The Transporter series not remotely in sight here.  He leads the charge as the rather mysteriously known “H”, a recently employed armoured security vehicle driver whose quiet demeanour initially puts him on the radar of the fellow drivers as little more than a newly recruited badge number they can lay smack on.

In the film’s early stages of setting up H’s dynamic within his new surroundings – including being taken under the wing of the chatty Bullet (Holt McCallany) and warding off backchat from the intriguingly named Boy Sweat Dave (an odd Josh Hartnett) – Wrath of Man feels unsure of its footing.  Wanting to perhaps please the audience members under the assumption this is going to include staple Ritchie dialogue, the script peppers in occasional nuggets of humour that, whilst chuckle-worthy, never rise above being anything other than mildly amusing.  The film feels as if it’s at an immediate disadvantage, but, thankfully, once it sets up its first major narrative hook, it does away with much of the pleasantries and settles for a more violent temperament that suits the film to a tee.

Once Bullet and H survive an attempted armoured vehicle robbery, the latter’s marksman skills and brutal precision bring forth his true nature, with the film eventually backtracking its own steps and presenting us with a calculated backstory that introduces the artful Jackson (Jeffrey Donovan) and his own violent dealings that are unknowingly linked to H, both personally and, now, professionally.  Whilst it’s easy to accuse the film of banking on coincidence with its plotting, it’s a typical device we can easily forgive when what’s unfolding on screen is so enveloping.

As the film treads back and forth in its timeline across its 119 minutes, the final act culminates in an extended heist sequence that speaks to the film’s violent, unpredictable nature.  It may not exactly be presenting material we haven’t seen before, but the uncertainty Ritchie creates around his extended ensemble – which also includes Ritchie regular Eddie Marsan, The Boys‘ Laz Alonso, and an effectively villainous Scott Eastwood – laces Wrath of Man with a viciousness that proves incredibly exciting.

Not exactly a return to standard form for Ritchie, more another constructive ace up his sleeve, Wrath of Man works primarily as a driving seat feature for Statham, who is wonderfully welcomed back to the forefront of star vehicles.  Don’t let the somewhat shaky start fool you, this is one case of a man’s wrath you ultimately won’t be sorry to endure.

Wrath of Man is screening in Australian theatres from April 29th, 2021.