Film Review: Where the Crawdads Sing laces its dirty setting with a filtered gloss 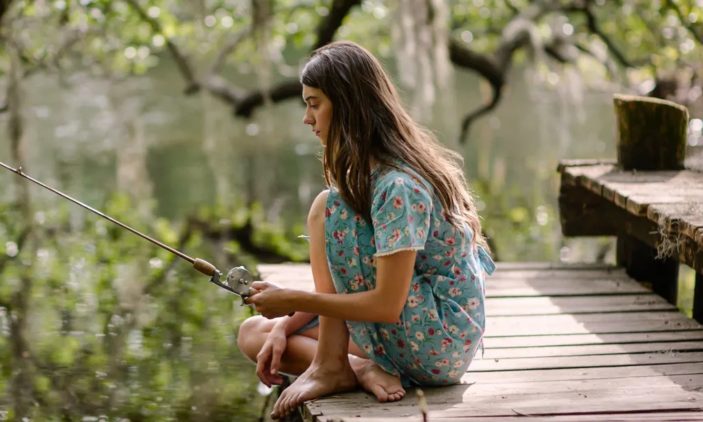 Where the Crawdads Sing seemed like the type of film primed for success before it was even released.  Delia Owens‘ 2018 novel was one of those reads that became the prose to intake during its first run (boosted by Reese Witherspoon‘s Hello Sunshine bookclub pick), leading it to be crowned the best-selling fiction title of both 2019 and 2020.

Witherspoon ultimately picked up the film to produce, and when its trailer dropped, the inclusion of a brand new Taylor Swift song (the moody, country folk-leaning “Carolina”) seemed to further its guaranteed interest from the intended female-skewed target market.

Of course, good marketing and impressive credentials does not always a good movie make, so just how harmonious a song are these crawdads singing?  However competently directed by Olivia Newman (First Match), the lush looking drama has far too glossy a sheen over its quite depressing narrative, one that follows the story of Kya Clark (Daisy Edgar-Jones) from her childhood to her twenties in a small 1950’s North Carolina town where she’s quite cruelly dubbed “The Marsh Girl”; a moniker born from her solitary living situation out in the wetlands, an existence she was essentially forced into following the gradual abandonment by her family.

Her mother (Ahna O’Reilly) and father (Garret Dillahunt) were in an abusive relationship that eventually drove everyone away, leaving Kya to fend off her father’s abusive mentality.  She survived such hardships by keeping to herself and staying quiet, but even he eventually left on his own accord, leaving young Kya to her own defences – something that, it would seem, is not remotely alarming for the townsfolk who happily accept an orphaned girl living out in the swamps; I guess child services was busy?

The local community all bask in the temperament of chiding the young Kya for circumstances out of her control, though the kindly Mabel (Michael Hyatt) and Jumpin (Sterling Macer, Jr.), the married owners of the local market, take to looking after her where they can, clothing her with donated garments and paying her for the pounds of mussels she digs to keep herself fed and mobile.  Despite such questionable material at this point, Jojo Regina‘s endearing turn as the young Kya is enough for us to stay invested in the melodramatic predicament she finds herself in the decade later.

And that would be murder, of course.

When the film opens we are already privy to the fact that well-to-do Chase Andrews (Harris Dickinson) is dead, the victim of an apparent attack, and, naturally, due to his association with such an outcast, Kya is the prime suspect.  So prime that she’s accused and jailed.  Staying true to her word that she is innocent, Kya seems defiant in the face of the law, so it’s of benefit to her that Tom Milton (David Strathairn, delivering a fine performance), a retired lawyer, takes it upon himself to represent her knowing that the town already has a bias against her and that Chase’s prominence and wealth only adds further cause.

The “love story” between Kya and Chase is one that fills out a great deal of the film’s 126 minute running time and is somewhat necessary in its telling pertaining to her trial, but Chase’s smarmy presentation is never even remotely genuine enough for us to believe his promises to Kya will ever come to fruition.  Kya’s never been one to easily trust and we gather she’s a capable woman on her own terms, so it is disappointing that such a weasel as Chase charms his way into her life.  This is even more apparent when the character of Tate (Taylor John Smith) enters the story, a former beau who broke her heart but forever holds a candle for her and, as we learn from their first meeting as children, the only person who loved her for her.

There’s a certain Nicholas Sparksness to proceedings that is likely to sit well with audiences after a glossy break from the higher octane features currently earning cinema attention.  Where the Crawdads Sing may not be the most exciting film per se, but it knows who it needs to cater to and, in that regard, it’s a moderate success.  The love triangle between Kya, Chase and Tate is ripe with schmaltz and questionable dialogue, but Edgar-Jones, Dickinson and Smith are all strong enough performers to overcome such shortcomings.  In fact, Edgar-Jones completely sells what the film is spruiking with a wide-eyed turn that balances her character’s innocence and conviction with an organic ease.

Though the marsh setting and Kya’s abode don’t seem nearly dirty enough – there’s a certain Pinterest-goals quality to it – and Edgar-Jones herself is far too glamorous throughout to ever appear remotely hard done by (this is poverty by way of H&M here), Where the Crawdads Sing knows it’s leaning into a tapped market of viewers unphased by specifics.  There’s an aesthetic pleasure expected with such a book as Owens’ and Newman plays accordingly, delivering a coffee-table mystery that admittedly hooked me when it narratively needed to and is likely to do the same for audiences versed with such artificiality.

Where the Crawdads Sing is screening in Australian theatres from July 21st, 2022.