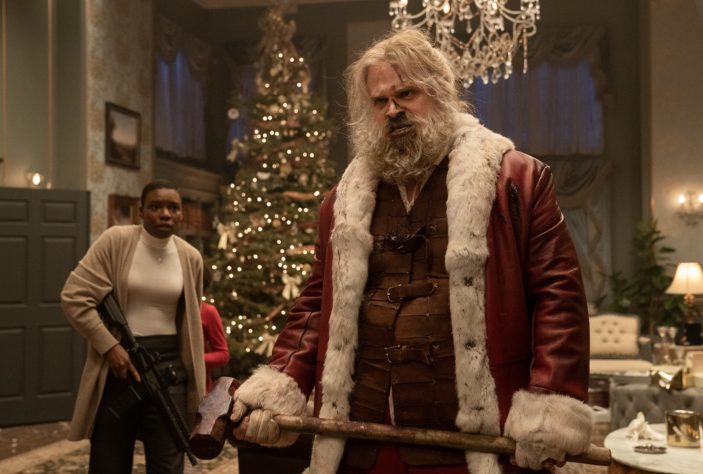 ‘Tis the month before Christmas and in Tommy Wirkola‘s sight, is a deliriously entertaining seasonal film called Violent Night.

Taking a few cues from Die Hard and embracing the brutal mentality of Home Alone – here you’ll see what would actually happen to someone if they were pummelled by bowling balls – director Wirkola (Dead Snow, Hansel & Gretel: Witch Hunters) and screenwriters Pat Casey and Josh Miller (both scribes on the Sonic the Hedgehog films) mash up a tried and true hostage scenario with a Hallmark sensibility, sprinkling Norwegian folklore and a very, very, self-defence capable Santa Claus into the mix to create a riotous good time that has just as much Christmas spirit as it does glorious carnage.

Old Saint Nick here is a little more jacked John Wick, and as played by a firecracking David Harbour, he’s the honest-to-God jolly fat man delivering goodies to the world’s children, but, as we gather from the film’s almost-sweet opening (you’ll see what I mean), he’s getting over the gig.  So, maybe it’s a blessing in disguise that he gets to flex his considerable muscle when he visits the expansive compound of the disgustingly wealthy Lightstone family – overseen by a foul-mouthed Beverly D’Angelo, having an absolute ball as the matriarchal Gertrude – who have been taken hostage by a self-proclaimed Scrooge (John Leguizamo, easily leaning in to the villainous archetype these types of film relish in) seeking a sizeable pay-day.

Scrooge and his squad of goons soon find themselves picked off one-by-one when Santa, who just wanted to deliver presents and maybe enjoy a glass of milk with his cookies, doesn’t take kindly to their threatening of Gertrude’s sweet granddaughter, Trudy (Leah Brady, a real find), as she so happens to be on the “nice” list.  Gertrude’s son (Alex Hassell) and his estranged wife (Alexis Louder) are also not the worst people in the room – that’s easily saved for Gertrude’s vapid daughter (Edi Patterson) and her son (Alexander Elliot) – so Santa’s going to do what he apparently does best, and that’s beat the living shit out of anyone that comes across his path.  Slay, indeed.

Whilst it’s absolutely fair to call Violent Night a wholly stupid film, it isn’t so much an insult to proceedings as it’s evident Wirkola and co. are entirely aware of the ludicrousness that they are projecting on screen.  Scenes don’t just readily recreate some of the shenanigans from Home Alone, characters openly discuss as such, but just when one of the numerous goons think they have thwarted such a trap – young Trudy eventually escapes the clutches of her captors and sets the house up in a manner that would make young Kevin McCallister proud – Violent Night pulls the rug out from under them and caps the set-piece off with a gory culmination that speaks to Wirkola’s comfort as a genre director.

As nothing is calm and all is proven not bright, Violent Night is a far better comedic actioner than I dare say audiences may be expecting.  It is entirely aware of where it sits within its genre, and though Harbour is consistently what keeps the film moving, a committed ensemble (Cam Gigandet is particularly enjoyable as a D-Grade movie-star who’s hoping Gertrude’s money will fund his action-star aspirations) make sure that whenever he’s not on screen cracking skulls and delivering cheesy puns that the film remains a seasonal delight.