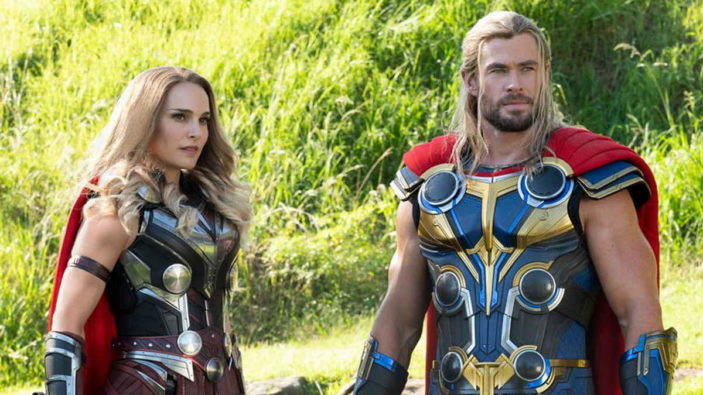 Once Taika Waititi reinvented the Marvel wheel with 2017’s wild Thor: Ragnarok, it made sense that the studio big-wigs would bestow further free licensing in the character’s shift towards a more humorous mentality.

And whilst that’s all well and good – we certainly don’t want the character regressing in any manner – Thor: Love and Thunder maybe leans into the comedic temperament a little too much over the course of its relatively swift 119 minutes.

By no means is Love and Thunder a bad film, but Waititi and Jennifer Kaytin Robinson‘s script never feels as if it’s made the narrative its primary objective, instead hoping that Chris Hemsworth‘s admittedly charming and effective comedic timing (and THAT body) will be enough to distract us from the fact that there’s the most basic of storylines here, with little in terms of stakes at hand and the most minute of universe reveals moving forward.

The narrative that is on hand – and what I feel safe in revealing – focuses on the confused God of Thunder and how his search for inner peace hasn’t really brought him any closer to self-satisfaction.  Sure, he has the Guardians of the Galaxy by his side – Chris Pratt, Pom Klementieff, Dave Bautista, Karen Gillan, and the voices of Bradley Cooper and Vin Diesel all returning for the briefest of appearances – but memories of “the one that got away”, Jane Foster (Natalie Portman), back on Earth remind him that a life without love is no life at all.

It’s a good thing then that Jane returns to Thor’s life in the most glorious of fashions, wielding his supposedly shattered hammer (Mjölner) in similar garbs, presenting herself as the Mighty Thor in the process.  Just why Dr. Foster is bestowed such powers is best left to be discovered, but it certainly lends the film the emotional edge it needs to offset the large bouts of comedy it consistently adheres to; though there is this sense of Waititi always looking for the joke, it’s difficult to deny how much he can get it right when executed correctly, with Russel Crowe‘s hilarious appearance as Zeus (and the scene that encapsulates him) standing as one of Love and Thunder‘s most worthy set pieces.

The emotion brought forth by Jane’s appearance is further emulated through the introduction of Gorr the God Butcher (Christian Bale, delightfully leaning into his villainous tendencies), a formidable, vampire-in-appearance killer who is seeking the extinction of all gods, travelling across all galaxies to rid them, with Thor’s Asgard the next target.  Despite such a talent in Bale, Love and Thunder unfortunately continues the MCU’s penchant for underutilised villains, with his Gorr not nearly given as much focus as he deserves.  Bale does all he can with so little – and there’s an incredible monochromatic sequence that speaks to his literal draining of the world’s colour through his actions – but it’s hard to not wish for more of his own detailed arc opposite Thor and Jane’s, and less of the humour that takes precedence.

As much as it sounds as if I’m complaining about Love and Thunder‘s preference for comedy, I’m not suggesting it isn’t a funny film – Waititi’s returning rock-formed Korg once again serves plenty of zinging one-liners, and there’s a star-studded amateur theatre show presentation that’s near-impossible to not be amused by – but such an emphasis proves detrimental to forwarding characters or this latest phase of the Marvel timeline.  There are interesting dynamics set up here, but the majority of them also having nothing to do with a punchy joke.

As we are told at the closing of the end credits (and this film has a duo of teasers) that “Thor will return”, it’s a comforting feeling knowing we will see more of Hemsworth wielding his sizeable hammer.  He has more than made this character his own, and Waititi’s influence in embracing the comedy has been of benefit, but after Ragnarok and, now, Love and Thunder, it would seem another shift is worthy of the mighty Thor’s growth as there’s only so many jokes to be told before it feels more novel than natural.

Thor: Love and Thunder is screening in Australian theatres from July 6th, 2022.