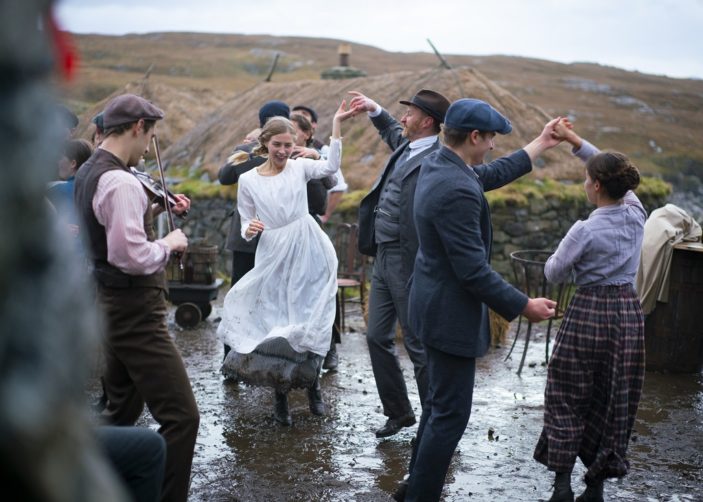 A sweeping melodrama that harkens back to a time when such tales filled local cinemas, The Road Dance would almost be a lush theatrical experience, with its traditional, old-fashioned storytelling, if it wasn’t for one crucial element of its narrative that grounds it in an unpleasant reality.

Based on a novel by John McKay, itself “inspired” by a true story of supposed Scottish lore, there’s an initial beauty to Richie Adams‘s drama where the Outer Hebrides in 1916 serve as the backdrop to Kirsty (Hermione Corfield) and her desire to want more out of her life.  She’s a devoted sister and daughter, but she wants an excitement in her life that she believes only the United States can give her, and so an emigration with her lover, Murdo (Will Fletcher), is imminent.

Before that can happen though Murdo is sent to the frontlines of the first world war.  At a celebratory send-off in the village – the titular road dance is organised to say goodbye to the soldiers-in-waiting – Kirsty, already suffering heartbreak in Murdo’s departure, is attacked and brutally raped; the sequence, whilst unpleasant, thankfully doesn’t linger too long.  She tells no one of her assault.

From here on The Road Dance navigates its story with delicacy and sensitivity, even if it is, at times, a little contrived.  Despite its subject matter, Adams does a commendable job in handling as such.  For a film that details violence against women and notes their struggles, the director doesn’t pander by taking a feminist approach.  Rather, he’s respectful in nature across the board, allowing his characters to feel like true, lived-in people, as opposed to them being devices for the sake of plot development.

Whatever shortcomings there are with the story – it eventually leans into the small-minded but big-hearted temperament of the village in the aftermath of Kirsty’s attack that results in a pregnancy she tries to keep secret from the townspeople – The Road Dance is elevated by the simply stunning turns of both Fletcher and Corfield, the latter especially grand in the type of performance that feels as if we’re watching an actress just before she breaks through to public awareness.  It’s also one of the most fetching looking films of the year too, with Petra Korner‘s cinematography capturing the scorched seclusion of the Hebridean landscape.

The Road Dance is now screening in select Australian theatres.