Film Review: The Oak Room is an intimate yet unsettling thriller 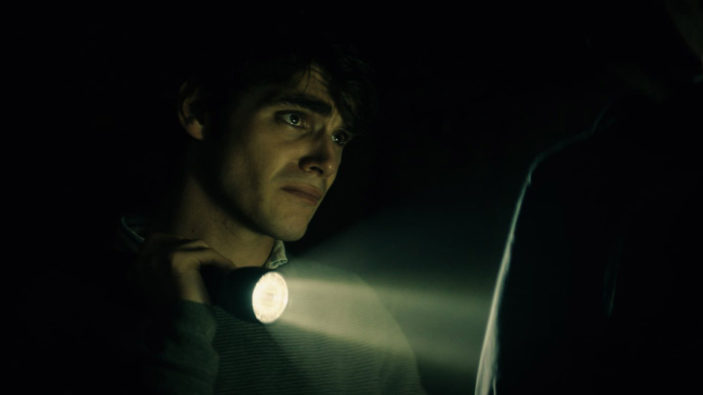 As much as The Oak Room‘s narrative basis of “A man walks into a bar…” sounds like a gag set up, Cody Calahan‘s slow burning thriller is anything but a humorous punchline.

The man walking into said bar is Steve (RJ Mitte), a prodigal son of a small Canadian town who, as we learn through rather organic exposition, skipped out on town a few years ago without even having the decency to return for his father’s funeral.  No nonsense bartender Paul (Peter Outerbridge), who Steve has the “pleasure” of conversing with on the film’s snowy-set night, even had to cover the cost of the coffin, leading to a considerably icy confrontation that Peter Genoway‘s script laces with a violent energy.

If Paul’s ill feelings towards Steve weren’t already seething, his insistence on detailing a story in the most roundabout of ways certainly isn’t helping matters either; “Goose the story”, Paul demands, as Steve’s intentionally muddled delivery of his bar-side yarn irks his ire further.  But there’s evidently a reason that Steve is detailing such a story – one that the film plays out in subsequent acts – and both Paul and us as an audience are hooked on his bait, whether we like it or not.

Outerbridge’s Paul is all profanity and machismo, and it’s likely he could grate on certain viewers’ nerves, but his frustration is understandable all the same.  Once Steve’s story unravels though, and the titular Oak Room is mentioned – a nearby bar where something particularly brutal took place – Genoway’s script twists in a manner that can’t help but hook us in, and slowly the narrative transforms into something of considerable unease.

If you’re someone whose patience wears thin, The Oak Room may not be the most sound of destinations, given, even at a crisp 90 minutes, it never entirely moves with a sense of urgency.  But in its deliberate pacing and gradual unravelling of its intricate weaved storylines is its ultimate strength.  Calahan and Genoway have delivered an intimate yet unsettling thriller that perhaps asks more questions than it answers, but there’s undeniable fun to be had in one’s own answer of what exactly happens after the man leaves the bar.

The Oak Room is available on digital download in the United States, Canada, the United Kingdom, and Australia from April 28th, 2021.