Film Review: The Grand Bolero is an erotically charged drama that adopts a melodramatic reality in its storytelling 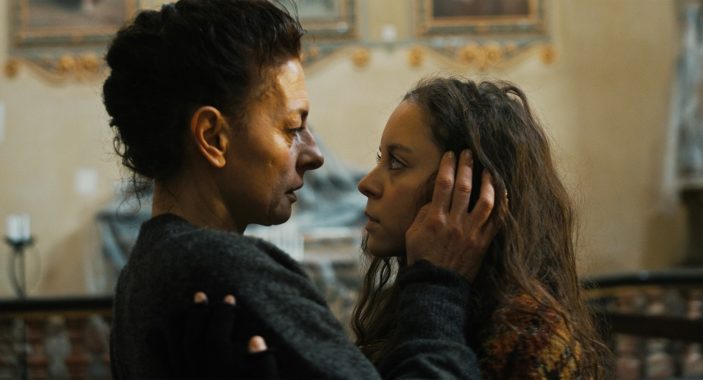 Who would’ve thought that organ playing could be so sexually intoxicating? Such is the allure of the instrument or, more correctly, the repairing of, that runs through the veins of Gabriele Fabbro‘s debut feature, The Grand Bolero, a relationship drama that shifts its power dynamic from one of status to sexual in nature over the course of the film’s tight 90 minute running time.

Set in Italy in the early months of 2020, when the pandemic forced its first locational lockdown, Fabbro’s film centres on the relationship between Roxanne (Lidia Vitale, commanding), a volatile, middle-aged pipe-organ restorer, and Lucia (Ludovica Mancini), a 20-something mute, who has arrived with the promise of free room and board in exchange for organ lessons.  Roxanne wants no part of it.

Roxanne’s boss however, he has a much more compassionate mentality towards the intimidated Lucia, urging Roxanne to look past her own ego and help the young girl with her playing.  Initially, theirs is a dynamic built on aggression, with Roxanne furious at every beat Lucia plays that goes against her own, whilst Lucia defies Roxanne’s orders and plays the organs in order to showcase her strength.  It’s here in this strength that Roxanne learns of the girl’s natural talent, soon harbouring feelings towards her that cross the line of acceptance.

Though the lockdown setting adds a certain reality to proceedings, The Grand Bolero still operates on something of a melodramatic temperament, and Fabbro is smart enough to never let the two intertwine in a manner that feels inorganic.  The background audio of news reports detailing death tolls and rushing ambulances certainly lend the film an air of unfortunate relatability, but we’re never taken out of Roxanne and Lucia’s liaison, something that is introduced towards the back end of the film that almost jarringly shifts the film’s tone.

And it’s not just the film’s sexual nature that surprises, but a further narrative twist implemented that threatens to potentially derail much of the beautiful subtlety that came prior.  Thankfully, Fabbro is aware that in Vitale’s forceful performance lives the film’s sensationalised heart, managing to navigate a certain campiness that offsets the occasional shocks the story delights in revealing without much of a hint that it will do so.

The Grand Bolero is now available for purchase on Prime Video in the United States.  It will be released theatrically in Italy on October 28th, 2022.  An Australian release date is yet to be announced.