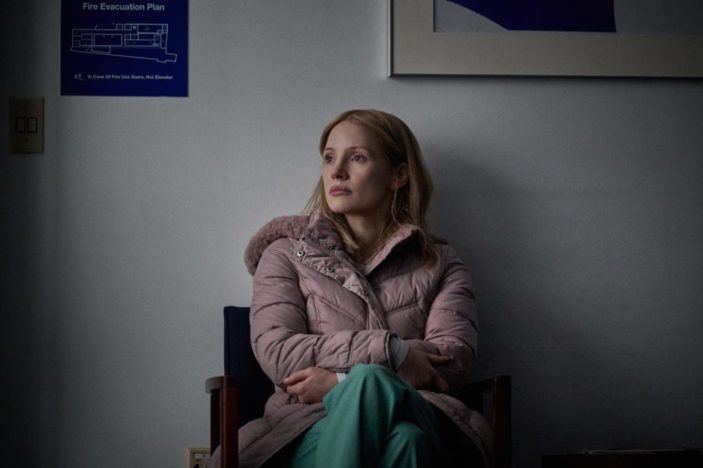 There’s something incredibly refreshing about The Good Nurse in that its true-crime temperament isn’t marred by overt manipulation – as so many of such adapted tales can be.

Jessica Chastain (as typically great and committed as expected) is Amy, the titular good nurse, a single mother who is hiding her own ailment as she dedicates her time to her patients; she has a heart disease that causes frequent attacks where her breathing is compromised.  Her doctor expresses the very real fact that it could kill her, but Amy’s predicament is that, despite working for a hospital, she can’t afford the intended transplant for a few more months when her health insurance finally kicks in.  She works through the pain.

Her difficulty goes largely unnoticed, but the quiet, friendly Charlie (Eddie Redmayne, utilising his own quiet demeanour to the best of his ability in one of his strongest perfomances to date), a new recruit to the hospital, warms to her quickly, notes her struggles and opts to cover for her when needed, whilst uncovering a certain system where he can slip her the appropriate medication without leaving a paper trail.

Charlie soon becomes a permanent fixture in Amy’s life.  He becomes something of another parental figure to her two young daughters, his soft exterior making it difficult to believe that someone of his character would put a foot wrong, let alone cause intentional harm.  But when one of the hospital’s elderly patients quite suddenly dies, the hospital administrators go into damage control, seemingly harbouring a cover-up mentality – even if they aren’t entirely sure what they are covering up.

Seven weeks after the incident, the hospital’s risk officer (an assured Kim Dickens) has her hand forced to include police officials (Noah Emmerich and Nnamdi Asomugha as the investigating detectives), but the fact that she remains so vague and cautious in handing over any detailed information only furthers their suspicions, and when they learn the body in question has been cremated they’re perplexed as to how anything can go forward without the necessary evidence.

Soon the hospital chatter falls to Charlie.  The fact that he’s had so many hospital employments and has left each after mysterious patient deaths doesn’t go unnoticed, but there’s no official proof of his involvement, and as much as viewers may think such a history would cause suspicion earlier for someone in his situation, Krysty Wilson-Cairns‘s script (based off Charles Graeber‘s book of the same name) is intelligent enough to reference the actions some major companies take to save their own skin.  Acknowledging Charlie opens them up to wrongful-death suits and it seems easier for each hospital to quietly discard him and let him move to another employer.

Amy’s acceptance of this reality leads her to playing unwilling secret agent.  Now trying to keep her own health safe, she aims empathy at Charlie, hoping that her non-threatening approach will get him to confess.  Only slightly do we ever see Amy feel genuinely unnerved at Charlie’s appearance – him being a fixture in her household means her children have grown attached to him – and for his part, only towards the film’s backend do we see the type of facade he’s been masking behind; Redmayne manages to avoid any show “serial killer” type moments, rather expressing deep, psychological pain at what he’s experiencing.  It’s the fact that no one stopped him that kept him going.

Director Tobias Lindholm certainly doesn’t make a great case for the American healthcare system with The Good Nurse, once again highlighting the profit motive that such corporate governments adhere to, but offsetting that is the fact that the real-life Amy – the actual “good nurse” – went right back to work after assisting in Charlie’s arrest; as the end credits inform us, “she is still a good nurse” and that is more than enough to applaud such a film that may have the mechanisms of a Hollywood tale, but overcomes them with a strong, honest core.

The Good Nurse is streaming on Netflix from October 26th, 2022.

The Good Nurse was originally reviewed as part of our Toronto International Film Festival coverage, which ran between September 8th and 18th, 2022.