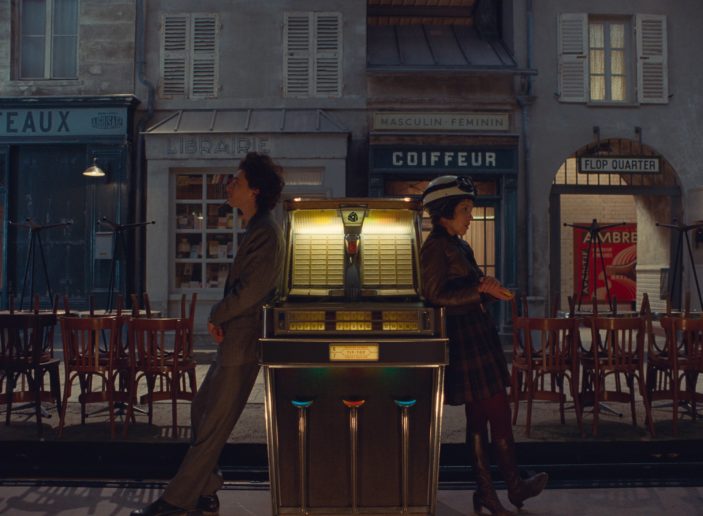 The French Dispatch tells a series of stories through a framework of a newspaper publication known as The French Dispatch. The framework begins with the death of Arthur Howitzer Jr. (Bill Murray), the editor of said publication and we follow the stories of the final farewell issue; which consists of three major articles, a minor feature and an obituary. The stories venture into various themes like art, politics, identity, social upheaval, young love but through the eyes of acclaimed filmmaker Wes Anderson, we can expect something uniquely whimsical.

With Wes Anderson films, filmgoers can expect a huge ensemble cast, the intricate use of miniatures, symmetrical framing, eccentric humour, stop-motion animation and low-fi art direction. And with his latest film, it definitely delivers on all fronts. The visual imagination Anderson puts on display is enjoyably cine-literate and yet still compellingly singular in accordance to Anderson’s voice.

As expected with the setting, there are numerous moments that hark back to early French cinema like the works of Jacques Tati (in terms of visual comedy) and the works of the French New Wave like Jean-Luc Godard and Agnes Varda (in terms of tone shifts in tone and colourful choices in editing). And while the central visual conceits are esoteric to general audiences and even some die-hard Anderson fans, with a merry score by Alexandre Desplat and Anderson’s love of the world is infectious enough that the unbridled enthusiasm is more than enough to make one willing to go on the adventure.

As with all anthologies, the stories vary in quality but thankfully, the standard average is high. Anderson establishes the world and the tone succinctly and briskly with the obituary of Howitzer Jr. and the wonderful short (The Cycling Reporter) involving Anderson regular Owen Wilson as a tour guide, showcasing the city of Ennui-sur-blaise.

The first segment (The Concrete Masterpiece) is by far the funniest one. With a story that mines humour out of the meretriciousness of art, Anderson plays with the absurdities with one’s perception of what constitutes as a work of art; complete with subverting taboo subjects like the application of double standards on placing sympathy for flawed human beings. With fantastic turns from the gruff Benicio Del Toro as the literally tortured artist, the sharp Lea Seydoux (who is having a fantastic film year) as the muse, the arrogant Adrien Brody as the con artist and a kooky Tilda Swinton as the lecturer/feature writer who blurs the story with her own story, The Concrete Masterpiece is a real winner.

The second segment (Revisions of a Manifesto) is a very well-done segment as it extracts humour from the many follies of youth via ambition, angst, young love, recklessness, hope and destiny. Through the life-changing events like war and government overthrows, Anderson pricks the absurdities of said events with charming aplomb. Even with certain taboo elements including the May-December relationship between the leads, Anderson grounds them into the story just enough that he makes those moments amusingly farcical and truthful to the characters. With stand-out performances from Frances McDormand (who delivers deadpan like a pro), Timothee Chalamet (who satirizes the arrogance and bravado of his character convincingly) and Lyna Khoudri (a marvellous screen presence that impresses with her ferocity both comedically and dramatically), Revisions of a Manifesto delivers.

The final segment (The Private Dining Room of the Police Commissioner) is the most action-packed and poignant segment that ends the film on a satisfying note. Filled with action sequences that rival the snow-sledding sequence in The Grand Budapest Hotel and the shootouts in The Life Aquatic with Steve Zissou, Anderson wanted to make sure the film hit the definition of the word “climax”. However, with the themes of wrongful persecution, discrimination, homophobia and racism in tow, the pathos Anderson has for his characters (particularly through the viewpoints of both Jeffrey Wright and Steve Park, who deliver touching performances) end the film on a beautifully eloquent note.

As with many Anderson projects, the humour and focus on details may be very overwhelming on a first viewing. So much so, filmgoers will view the whimsy and esoterism as pretentious. Even long-time fans of Anderson will see the film as self-aggrandizing to the point that it almost feels like a parody. But there is no slowing down for Anderson any time soon as his powers are still at hand and The French Dispatch shows very little signs of decline.

Overall, The French Dispatch is an overly joyful, fanciful and colourful piece of work that delivers everything Anderson fans could want; complete with an amazing ensemble cast, memorably low-fi visuals, a hilariously shrewd sense of humour and an infectious love for storytelling through the written word. Highly recommended.

The French Dispatch will be showing in cinemas from December 9th.