Film Review: The Flip Side (Australia, 2018) is breezy and enjoyable but far too safe and predictable 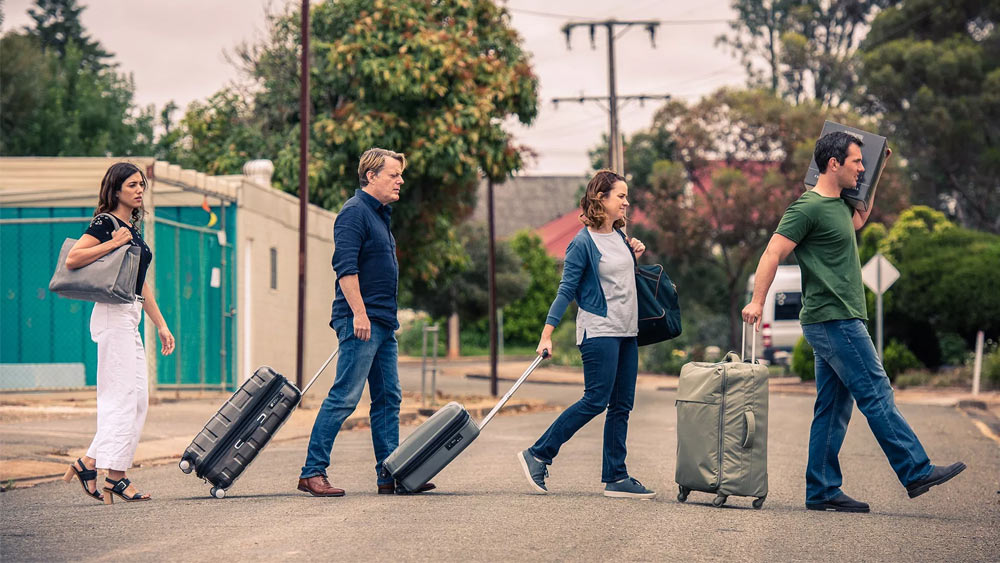 Australian cinema has produced some of the finest comedy the screen has ever seen. But the romantic comedy genre is not a territory we Aussies explore particularly well. For every groundbreaking example like last year’s sublime Ali’s Wedding, there’s something as generically safe as The Flip Side, the debut feature film from producer-turned-writer/director Marion Pilowsky. There’s nothing inherently wrong with taking this path. The end result here is still a rather breezy, entertaining experience. However, with a cast full of superb comedic talent, The Flip Side feels like a terribly wasted opportunity.

When we first meet budding chef Ronnie (Emily Taheny), she’s working as a caterer on the Adelaide set of the latest film starring superstar British actor Henry Selbert (Eddie Izzard). She’s also madly in love with the egotistical thespian, almost as much as he’s in love with himself. In the throes of passion, Henry invites Ronnie to run away and join him in London. Before she can even pack her bags, Henry promptly heads home without Ronnie, never to be heard from again. Five years later, and life appears to have improved for poor Ronnie, but looks can be deceiving.

While she has parlayed her love of food into owning her own quaint little restaurant, the unpaid bills are piling up and eviction is ever-looming. This also makes it difficult for Ronnie to pay for the nursing home care of her beloved mother, Iris (Tina Bursill) who is in the early stages of dementia. But Ronnie appears to have found love in the form of Jeff (Luke McKenzie), her wannabe writer boyfriend who spends most of his time lazing on the couch, while he works on his great “existential” novel.

A well-meaning dullard, Jeff is blissfully unaware of Ronnie’s crippling financial troubles and the agonising stress they’re causing her. Actually, he’s blissfully unaware of many things involving his girlfriend including her scandalous past fling with a major movie star, merely thinking the two were close friends while on set. So when Jeff receives a call from Henry’s French assistant Sophie (a scene-stealing Vanessa Guide) to organise a catch-up drink on Henry’s upcoming visit to Adelaide, he sees no reason to say no, much to Ronnie’s horror.

Upon their arrival in Adelaide, it’s revealed the stunningly beautiful Sophie is not just Henry’s assistant but rather his latest girlfriend, causing all sorts of jealousy to awaken in Ronnie and a simmering level of tension between the two females so thick, you could cut with a knife. But Jeff remains hopelessly oblivious, inviting the tourists to stay at his home with Ronnie instead of a hotel. As the Barossa Valley wine flows and an unexpected road trip is taken, this unusual foursome is in for a complicated few days together.

While this is being branded as a romantic comedy, it errs towards being a little light on the big laughs. This painfully awkward scenario naturally lends itself to some uncomfortably funny moments, particularly in Jeff’s vapid ignorance of the love triangle happening right under his nose. It’s deliciously amusing to see the bewildered looks on Ronnie’s face, as a star-struck Jeff continually invites their guests to extend what begins as a brief visit. Henry adds fuel to the fire with his empty promise of turning Jeff’s work-in-progress novel into a feature film, allowing him to manipulate the dolt into keeping the movie star around.

Izzard plays this role with aplomb, mixing equal parts of charisma and narcissism to create the cliché lothario actor who always keeps one eye on his career and the other on his latest female conquest. There’s a sense of a true connection with Ronnie, but it’s consistently scuttled away by his frustratingly selfish actions, creating a character you both love and loathe. Izzard is the perfect choice for such a role, given he has always been a performer who deftly toes the line between good guy and villain. His chemistry with Taheny is electric, but, frankly, the effortlessly charming Izzard could play opposite a baked potato and somehow make it work.

Unfortunately, the same can’t be said for Taheny and McKenzie who suffer from a terrible lack of any semblance of authentic connection. At times, their relationship feels more akin to brother and sister or even mother and son. Jeff is a wonderfully lovable and endearingly dopey character, but it never feels particularly genuine for a strong, intelligent woman like Ronnie to be with someone so painfully dim-witted and lacking in any drive for life. Ronnie seems continually frustrated by Jeff, which damages the effectiveness of the narrative’s intent to create a dizzying love triangle. You’re not really sure which guy to root for here, and it’s likely you’ll start hoping Ronnie just walks away from both men to find her own feet.

Taheny is a delight to watch, gifting Ronnie with an inviting vigour and unrelenting determination to make her life something great. Ronnie desperately needs that one big break in life. She just has no idea how to make it happen, and the arrival of her lost love isn’t helping matters. There’s a real sense of “how did my life get here?” frustration to this character, and Taheny plays this exasperation well. But the film fails to take advantage of Taheny’s impeccable comedic timing. If you’ve seen her work on the riotous ABC comedy Shaun Micallef’s Mad As Hell, you know what she’s made of. None of that wit and acuity exists here, and the film suffers for it.

The main laughs are elicited by French actress Guide, with a rightly over-the-top performance as the vampy and provocative Sophie. Guide steals focus in every scene and gets the film’s best lines, particularly in one scene involving a discussion of the Australian “bush.” Sophie is so outlandishly suggestive, it does push the limits of believability. But Guide commits to the role completely, crafting a character who still somehow feels genuine. But the real highlight is a brief cameo from Aussie screen legend Tiriel Mora as an outback mechanic with a penchant for the F-word. Sadly, the film completely wastes the talents of Susie Youssef, whose only function is to serve as a sympathetic sounding board for Ronnie at the restaurant.

With her debut feature film, writer/director Pilowsky earnestly attempts to deliver something with a little more substance than just another fluffy romantic comedy. There’s a concerted effort for the narrative to provide some interesting commentary on the perils of those late 30-somethings whose lives are still as messy and tangled as a 20-something. But it never digs deep enough to really investigate these themes properly, particularly with the film’s disappointingly predictable conclusion. The film clearly has something to say, but, unfortunately, the message gets lost in its desire to focus more on the romance and less on the protagonist’s journey.

That being said, The Flip Side is still a breezy time-passer one can easily enjoy. It’s certainly a charming sight to see an Australian film set in Adelaide, as opposed to the typical Sydney or Melbourne setting. Pilowsky is an Adelaide native and takes great delight in showing off the highs (and lows) of the City of Churches and surrounds. This film may not reach the heights of classic Australian cinema, but not everything has to.

The Flip Side is in cinemas now.