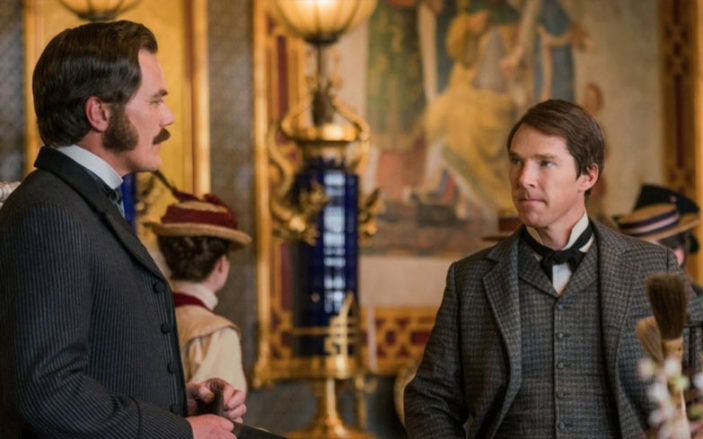 One of the biggest film casualties of the Harvey Weinstein sexual assault scandal has been Alfonso Gomez-Rejon‘s The Current War; a lavish period biopic which was surely due to be Weinstein’s great big Oscar hope of the 2017 season. After premiering at the 2017 Toronto International Film Festival to a tepid response, Gomez-Rejon was furiously re-editing the film so as to meet its November theatrical release date when the Weinstein story broke.

When The Weinstein Company naturally collapsed and the film was pulled from release, Gomez-Rejon raised an additional $1 million to complete reshoots and re-edit the entire film in a drastic attempt to save this beleaguered production. After sitting on the shelf for almost two years, The Current War was finally dumped into American cinemas last October. And now its Australia turn, right in the middle of coronavirus chaos. Could this film be any more cursed?

Sadly, for all the effort that’s gone into delivering The Current War, the wait is far from worth it. This should have been something truly great. All the hallmarks of an Oscar contender are here, particularly the ones Weinstein was so known for. The remarkable true story is there. So is the impeccable ensemble cast and the extravagant period costume and production design. But the end result is such a terrible bore, beset by a dull screenplay that sucks the life out of this dazzling piece of history.

The year is 1880 and brash inventor Thomas Edison (Benedict Cumberbatch) is riding high after genuinely changing the world with his latest two inventions; the lightbulb and the phonograph (now more commonly known as the gramophone). But Edison has bigger dreams for his lightbulbs, namely lighting up every home in America. After securing the financial backing of J.P. Morgan (Matthew Macfadyen), Edison intends to light up five blocks of Manhattan by utilising the limited range and highly expensive Direct Current (otherwise known as DC).

Intrigued by Edison’s plans, Pittsburgh businessman George Westinghouse (Michael Shannon) invites the inventor to dinner with his doting wife, Marguerite Erskine (a terribly underused Katherine Waterston). After Edison cruelly snubs the invitation, Westinghouse sets out to prove Alternating Current (aka AC) is a cheaper alternative that can also travel greater distances. As such, the titular “current war” begins, as the two men battle it to convince cities across America to employ their system of electricity.

Edison is aided by his trusty secretary Samuel Insull (Tom Holland), while Westinghouse relies on the impressive skills of Serbian-born mechanical engineer Nikola Tesla (Nicholas Hoult), who initially worked for Edison but quit after the inventor failed to appreciate his true brilliance. As the battle to light up America deepens, the competing systems will finally come to a head when they both seek the contract to power the 1893 World’s Fair in Chicago.

Perhaps the biggest crime of The Current War is how shamefully it wastes its ridiculously stacked ensemble cast. Any director would die to have this roster at their disposal, but Gomez-Rejon seemingly has no idea how to properly utilise any of them and the flat screenplay by Michael Mitnick doesn’t help matters either. When reliable names like Cumberbatch, Shannon, and Hoult can’t save your film, something is clearly terribly wrong.

Cumberbatch has played this style of abrasive, somewhat-unlikable character numerous times before (namely his Emmy-winning work on Sherlock or his Oscar-nominated turn in The Imitation Game), but there’s a glaring lack of depth to Edison, leaving him to be a terribly unsympathetic protagonist. To be blunt, he’s kind of an arrogant jerk and it’s rather difficult not to want to see him fall flat on his self-important face. It may very well be an entirely accurate portrayal of the noted historical figure, but it could be entirely why cinema hasn’t touched his life story since 1940’s Edison, the Man.

In a less bombastic role, Shannon offers a far more grounded character who’s less concerned with publicity and more focused on simply improving the lives of his fellow man. Much like Edison, Mitnick’s screenplay fails to provide Westinghouse with much substance, but Shannon has more emotions to work with, particularly after Westinghouse suffers a devastating tragedy. It’s an understated performance that plays on Shannon’s strengths, offering a portrait of a brilliant man history has seemingly forgotten.

It appears Gomez-Rejon may be entirely self-aware the narrative of The Current War is a god-awful drag, given he’s overloaded the film with numerous grandiose stylistic decisions in a vain attempt to keep your attention. However, these consistently prove to be genuinely distracting and offputting, often working completely at odds with the period setting. While the cinematography of Chung-Hoon Chung is certainly unique, his choice of curious angles and bizarre framing simply doesn’t work here. Likewise with Hauschka and Dustin O’Halloran’s blaring score, which is a strange mix of soaring strings and calamitous electronica. And the less said about David Trachtenberg‘s frenetic, chaotic editing, the better.

It’s a shame the portrayal of a genuinely fascinating moment in history has made for such an ordinary film. Sure, The Current War has been plagued by all sorts of post-production hell, but that’s far from the reason this movie lands with a thud. Once again, we see that not every great historical figure makes for great cinematic viewing. By playing as little more than a Wikipedia checklist of the events which led to the birth of homes powered by electricity, The Current War lacks the true spark to create any real power.

The Current War is in cinemas now.