Film Review: The Broken Hearts Gallery is a predictable yet winning rom-com with a star performance from Geraldine Viswanathan 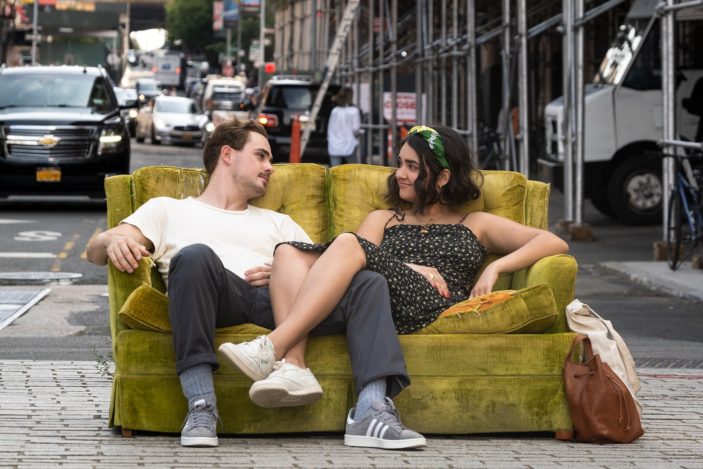 Romantic comedies are a bit of a conundrum in terms of execution. In comparison to other genres (and oddly enough, the action genre), it has gone through the most criticism. While people can get into the fantasy of said genre, others criticize the genre for its lack of realism and plausibility.

Case in point, The Broken Hearts Gallery by writer/director Natalie Krinsky. The idea of using breakups as a through-line in a romance film is nothing new but the concept of holding onto memories is more novel. With an appealingly youthful and diverse cast and an interesting premise, the film has some promise. Will it manage to keep it and be a sterling example in the rom-com genre?

Fellow Australian actress Geraldine Viswanathan stars as Lucy Gulliver, a New York art gallery assistant who is going through a downward spiral after her latest breakup with Max Vora (Utkarsh Ambudkar), a successful exhibitor who has discarded her for another woman. Known for her proclivity in keeping mementos from past relationships, her roommates Amanda and Nadine (Molly Gordon and Philipa Soo) express concern and urge Lucy to get rid of them in order to move on.

When her downward spiral results in her losing her job after an embarrassingly drunk escapade, Lucy ends up in the company of Nick (fellow Australian Dacre Montgomery) whom she incorrectly assumes is an Uber driver. Consequently, they keep bumping into each other and the two gradually bond over their predicaments and Nick shows her his oncoming project in building a hotel, which is at a standstill due to lack of financing. Lucy sees the structure and comes up with a novel idea that will solve both of their problems by coming up with a gallery that prominently displays mementos from failed past relationships.

On paper, the film may sound formulaic. But like the expression “if it ain’t broke, don’t fix it”, the rom-com formula is a formula for a reason and on those terms, The Broken Hearts Gallery works like a charm.

The story is like a well-made piece of furniture; it holds up well enough and it is sturdy in its usage but there seemingly is nothing special about it. The storytelling is predictable as all of the conflicts are established like a planned checklist. However, writer/director Krinsky subverts with the results just enough that they become more palatable i.e. there are no actual antagonists/cartoony villains in the roles of Max and Chloe (Suki Waterhouse), therefore the drama comes across as more convincing.

The script is also peppered with witty dialogue that succinctly provides both character context and mirth (the establishment of the relationship between Lucy, Amanda and Nadine) and comedic buildups that have do not go the way one would expect (the intercutting of characters explaining their breakups as a way of completing character arcs).

It also helps that Krinsky has assembled a fantastic cast that elevates their cliched roles with charm and enthusiasm. Viswanathan has been garnering acclaim one role after another ever since she had gotten attention from her work in the 2018 comedy, Blockers. Now with a lead role; she sinks her teeth into the character of Lucy with infectiously kooky energy that while make take some time getting used to; she makes the neuroses relatable and nails the potentially off-putting dialogue with gusto i.e “I love her so much, it gives me diarrhea”, Lucy utters with desperation as she describes her boss; and her justification for the word “grout” is downright amusing.

Montgomery underplays the role of Nick and manages to provide an affable contrast to Lucy’s optimism; making their relationship believable and easy to root for. The fact that they are both played by Australians and are both leading an American romantic comedy is not lost on this reviewer.

The supporting cast all hit their mark with Ambudkar turning on the charm as well as the smarm as Max, Soo lending ample mirth with her enjoyable cynicism and Gordon stealing the show once again with her impeccable comedic timing after her performances in Booksmart and Shiva Baby.

As for its flaws other than the predictable nature of the story, the comedy can be quite insistent in that it really wants the audience to know that the joke is funny due to heightened performances and letting a gag go on too long. It also does not help that there are glaring continuity gaffes that come from the territory of adlibbing and improvisations and also some of the jokes are not funny i.e. a Presidential joke in the result of breakup reveal lands with a huge thud.

Last but not least is the pacing, which seems rushed in the third act as it settles its conflicts a bit too swiftly and some of the character backstories are underdeveloped (especially Nick’s backstory in his interests in his field) that the film could have afforded more breathing time to develop them.

Overall, The Broken Hearts Gallery is an endearing and affable rom-com that overcomes its predictability, continuity gaffes and insistent comedy with a fantastic cast (Geraldine Viswanathan and Molly Gordon are the true MVPs), an interesting premise and amusingly droll dialogue from writer/director Natalie Krinsky. Recommended.

The Broken Hearts Gallery is now showing in cinemas.