Film Review: Swallow is a slow-burning thriller that transcends its potentially nauseating premise 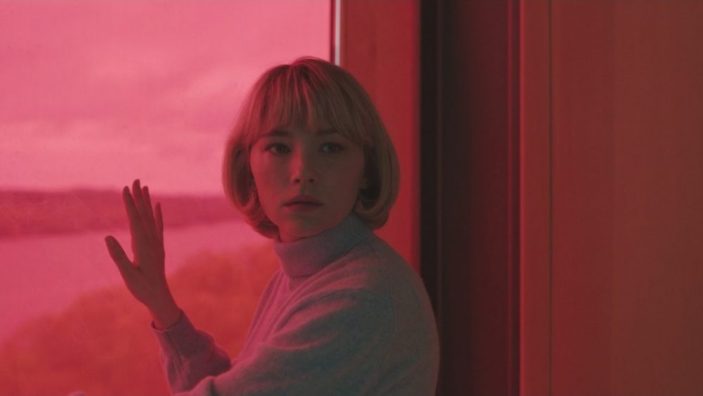 On paper, the premise for Swallow sounds almost too-grotesque to be relayed without resorting to some type of gimmick.  In reality, Carlo Mirabella-Davis‘s slow-burning thriller transcends its potentially nauseating core to deliver a deep, at times dark tale that wholly understands and respects its unique subject matter.

The film surrounds the delicate Hunter (Haley Bennett), a housewife-cum-trophy wife who appears all-too-eager to please her superficial husband, Richie (Austin Stowell).  She lives out the majority of her day alone in a perfectly manicured, chicly retro abode that she tends to with an OCD fashion, waiting with bated breath for “sweet” Richie to come home, where he pays her next-to-nothing in attention and has seemingly resorted to buying her affection.

Hunter is clearly just there for show.  And initially she doesn’t seem all that phased by the lack of interest her husband, and by extension his family, pay to her.  Or at least, that’s what she would have us believe.  Her recently announced pregnancy only further showcases her husband’s desire to have a wife for show, rather than for love.  Hunter is a woman not in control of her own body.

Hunter’s seeming compliance with submission proves in harmony with the disorder that slowly consumes her – pica, a psychological disorganisation characterised by an appetite for substances that are largely non-nutritive.  She seemingly can’t help herself from wanting to digest items like marbles and safety pins, and even though she’s inflicting pain onto herself – some of the sequences where she struggles to swallow certain items aren’t the easiest images to watch – there’s an invigoration in ultimate digestion.

As ludicrous as Swallow sounds, Mirabella-Davis commits to the tone and the ultimate heartbreak that billows underneath this bizarre concept.  It’s also of immense benefit that Bennett embodies the multi-faceted Hunter with a naturalism that keeps the film from ever cheapening the representation of this unique disease.

The film may prove a little too strange, and perhaps a little too slow for mainstream-inclined audiences, but appreciators of the weird and uncomfortable will hopefully embrace this deceptively deep thriller that questions the validity of one’s own agency.

Swallow is available on demand