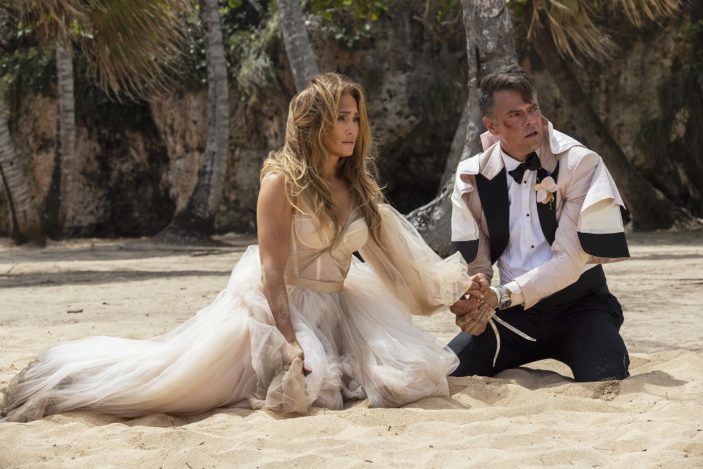 If there’s one thing you can rely on when it comes to the romantic comedy genre, it’s that if there’s a wedding involved Jennifer Lopez can’t be too far from the fray.  The reliable superstar knows how to play the genre game, but if any audiences are concerned that Shotgun Wedding will play things a little safe and traditional, I can attest that a healthy dose of profanity, surprising bloodshed, and a scene-stealing Jennifer Coolidge will change your mind.

It also helps that Lopez’s leading man comes in the form of Josh Duhamel, an underrated actor who knows how to balance the charm and insecurity necessary for his character, Tom, when shit hits the fan.  Before said shit hits said fan, Tom and Lopez’s Darcy are trying to keep their cool on the night before their big day, an event that has ballooned beyond what Darcy wanted; screenwriter Mark Hammer (Two Night Stand) flipping the expectation here with Tom the one who has ticked the box on “exotic island locale” for their nuptials.

A failing baseball star who’s on the defensive about being dropped from his team, we first meet Tom on overdrive when he’s making a few last minute alterations, leaving Darcy to fend for herself at the rehearsal dinner where Tom’s overly-loving (and over-sharing) parents, Carol (Coolidge) and Larry (Steve Coulter), smother her with well-intentioned affection and present her “something borrowed”; a rusty knife that apparently brings good luck and is accompanied with a lightly horrifying anecdote about a family member being decapitated – “But that’s not the knife’s fault”, as Carol so cheerily adds.

Cold feet and the disapproval of Darcy’s parents (Sonia Braga and Cheech Marin) ultimately leads to day-of jitters, and as Tom and Darcy argue about what it is they want, Jason Moore‘s up-to-this-point-standard-enough-romantic-comedy decides to throw a spanner into the works when the island resort they’ve ushered their guests to – including Callie Hernandez as Darcy’s sister, D’Arcy Carden as Darcy’s father’s much-younger girlfriend, and an enjoyable Lenny Kravitz as her hard-bodied, over-achieving ex-boyfriend – is overthrown by pirates, all heavily armed and demanding a multi-million dollar ransom from Darcy’s wealthy father.

It’s a ridiculous turn of events – especially when the mastermind behind it all is revealed – but it’s nonetheless a mentality that director Moore (Pitch Perfect) leans enough into for it to work.  It also helps that both Lopez and Duhamel are game enough to play to the archetypes of the romantic comedy as much as the action sensibilities required of them, so by the time Shotgun Wedding arrives at its culmination, we are fully on board to embrace the imagery of both Jennifers brandishing weapons; Lopez with a traditional shotgun, Coolidge with a more automatic weapon when she’s able to momentarily talk her way out of being a hostage.

No romantic comedy meal is complete without a little corn and cheese, and Shotgun Wedding certainly abides by the rules of the genre – especially when Darcy and Tom are arguing over their future during the interludes of their violent situation (and it should be noted, this film is a little more bloody than may be expected) – but it’s clearly aware of both its necessities and what’s required to allow itself to step away from its counterparts.  By no means is Shotgun Wedding breaking the mould on what it is to be a romantic comedy-cum-action film, but there’s a state of consciousness here that means it gets away with any narrative lunacy that might be deemed a negative.

There’s a certain pep and disregard for entire safety that, at least, gives the film a certain edge, even if it can’t help but feel a little jarring, personality-wise.  Throughout all the tonal inconsistencies however, Lopez, Duhamel and Coolidge continually elevate Shotgun Wedding to a tier worthy of RSVPing to.

Shotgun Wedding is streaming on Prime Video from January 27th, 2023.