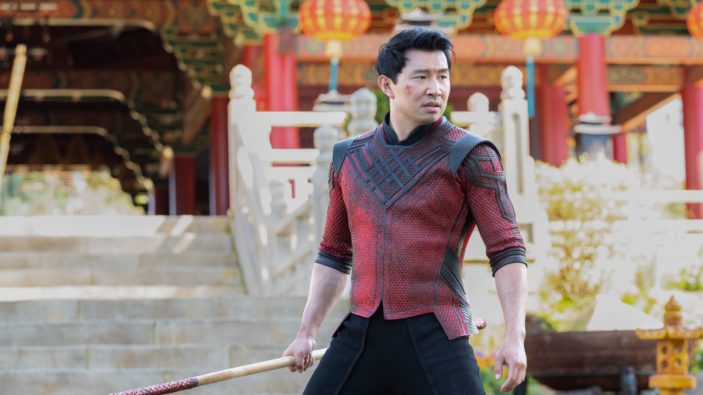 Familiar with a little father-son friction thanks to his role on TV’s Kim’s Convenience, Simu Liu experiences similar, though considerably higher emotional stakes, but no less dramatic, as the titular warrior-to-be Shang-Chi in Marvel’s latest extravagant offering, Shang-Chi and the Legend of the Ten Rings.  There’s the typical end-of-the-world dilemma to contend with, but Destin Daniel Cretton‘s MCU debut – the director primarily having worked in moderately budgeted dramas to this point, including Short Term 12 and Just Mercy – has a stronger family thematic at its core, not unlike this year’s Black Widow, where dysfunctional dynamics take precedence over warfare.

The Ten Rings of the title belong to Wenwu (Tony Leung), Shang-Chi’s father, a global warlord running a crime syndicate that essentially funnels his desire to alter the course of history for his own benefit; the rings harnessing an immortal power that have served him for a thousand years, thus far.  Shang-Chi and his sister, Xialing (newcomer Meng’er Zhang, an absolute knockout), have been trained in the mastery of martial arts since their infancy, being built to be the perfect assassin, learning “every possible way to kill a man” in Wenwu’s bid for them to join his intended army.

As abusive as this sounds, Wenwu has sound reason – at least he believes so – in that his intention to keep Shang-Chi and Xialing close is a manner of coping with his own grief over the loss of his wife, Jiang Li (Fala Chen), a martial arts master who Wenwu believes is calling to him to be freed from the afterlife.  Cretton’s script, co-written with Dave Callaham (Mortal Kombat, Wonder Woman 1984) and Andrew Lanham (The Shack, Just Mercy), indulges in a more fantastical mentality throughout, eventually shifting the San Francisco-set narrative to an otherworldly paradise known as Ta Lo, a CGI-adorned setting that ties directly to Shang-Chi’s family and becomes the backdrop for an extended, if perhaps overdone, climax that leans into a fairy-tale temperament that feels far removed from the last wave of Marvel titles.

Prior to that though, we learn that Shang-Chi, in his best to turn away from the violent lifestyle he defied, has made a nice, low-key existence for himself in the aforementioned San Francisco, changing his name to Shaun and enjoying each day as a valet driver alongside his best friend, Katy (an enjoyably peppy Awkwafina).  There’s an easy chemistry between the two, thankfully also not pushed as a romantic inclination, and Katy’s supposed knowledge of all things Shaun comes to a choreographed head when the one-armed Razor Fist (Florian Munteanu) interrupts their bus journey, transforming the mild-mannered Shaun into a precision-efficient fighter – part Bruce Lee, part Jackie Chan – and, after rivalling that bus fight sequence in the slick Nobody, forces him to reveal just who he truly is.

It’s in the film’s front half that the story of who Shaun is that Shang-Chi… truly shines.  Cretton orchestrates natural banter with ease and presents an origin tale that, minus an Endgame reference (“Hello, post-blip anxiety”) and an enjoyable extended cameo from a familiar face, doesn’t feel like the usual MCU fare.  It’s when the story shifts and Shang-Chi has to face his father and embrace his superhero self that the 132 minute actioner adheres to a more typical temperament.

This is certainly not to say that Shang-Chi… suffers due to its familiarity, as regardless of how overblown the climax becomes, the sparkle is never dimmed, continually made all the more bright by the capable Liu, the adorably hyper Awkwafina, and a welcome appearance from the calming Michelle Yeoh as Shaun’s aunt, Jiang Nan, with her thrilling wire work in Crouching Tiger, Hidden Dragon brought to memory throughout; there’s also a second friendly face from the MCU canon involved here that serves as an agreeable reminder of how joyous some actors can appear when surrendering to the Marvel mind-frame.

The obligatory end-credit sequences – and for those curious, we get two here – hint at further adventures for Shang-Chi, and given how efficient Liu handles himself as both the formidable hero and his karaoke-enthused everyday-man alter ego, Marvel appear to have more than found a worthy player to sit high upon the action mantle with his more well-known counterparts.

Shang-Chi and the Legend of the Ten Rings is screening in Australian cinemas from September 2nd, 2021 (where accessible).