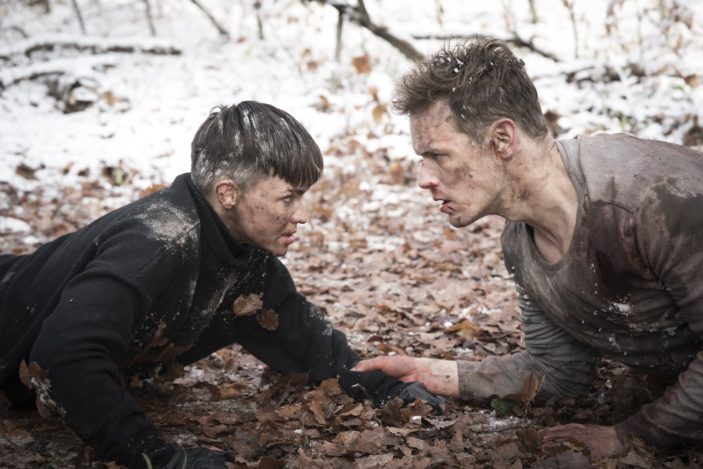 Perhaps something of an unofficial audition for the next post on the 007 roster – or maybe that’s second audition, given he was a name suggested around the same time as Daniel Craig secured the role – Sam Heughan does his best secret agent impression in SAS: Red Notice, a disposable but supremely entertaining actioner that can best be summed up as “Die Hard in a tunnel”.

Hoping for a momentary break from his special forces work, Heughan’s Tom Buckingham (perhaps the most British name put to screen) plans to propose to his long-suffering girlfriend, kindly doctor Sophie (Hannah John-Kramen), in Paris.  Given that prior to their boarding of the train to Paris we are aware of the mercenary collective Black Swans, led by the cold-blooded Grace (Ruby Rose), also boarding for their own terrorist-leading intentions, it’s only a matter of extended minutes before Laurence Malkin‘s standard script dedicates itself wholly to an action temperament that, whilst not entirely original, remains suitably investing.

As much of a war criminal Grace is, she’s merely following orders from a higher power in order to expose the British Government; the Black Swans, under the direction of the Prime Minister, have been instructed to clear out a village in order to make way for a gas pipeline. Grace, like any genre villain, demands a ransom, and should that not be met she intends there to be mass casualties, so it’s lucky for the remaining passengers that trigger-happy Tom and doctor Sophie are on-board to help.

Whilst SAS: Red Notice attempts to be a little more character-driven in its narrative, director Magnus Martens (TV’s Fear the Walking Dead) ultimately settles on an action mentality to drive the film forward.  It’s commendable though that characters such as Rose’s Grace and Andy Serkis‘s counter-terrorism leader Clements straddle the line of what constitutes good and evil, but when the camera seems to overly delight in Heughan’s comfort of hand-to-hand combat and gun control, it becomes evident where this film’s focus truly sits.

Culminating in a slick, bloody showdown between Heughan and Rose, the Australian star proving her continued ease in the genre, SAS: Red Notice succeeds primarily as a violent actioner, though earns points for attempting to be more than just the potential franchise starter it clearly wants to be.  It’s occasionally messy and never subtle, but aesthetically it’s deliriously pleasurable and far better than it has any right to be.

SAS: Red Notice will be available in North America on demand and digital from March 16th, 2021.  An Australian release is yet to be determined.