Film Review: Rushed is a tender, yet furious drama about the hazing ritual culture of American fraternities 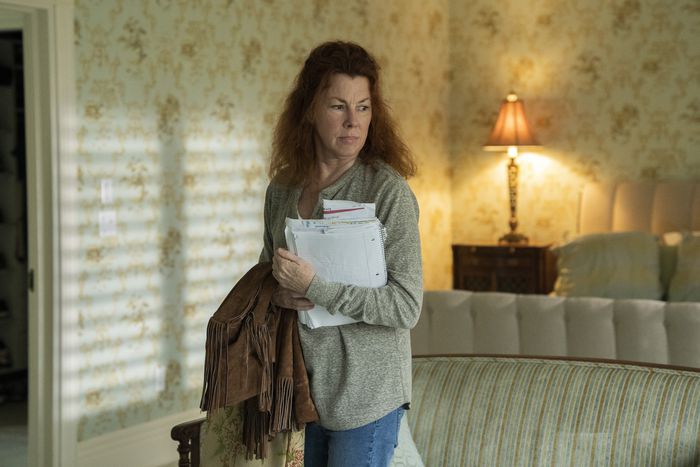 Siobhan Fallon Hogan may not be the most recognisable name, but you best believe she’s someone you notice when on screen.  Perhaps best known for her stint on Saturday Night Live, as Elaine’s roommate in TV’s Seinfeld, and films such as Men In Black, where her character was perplexed by the sugar intake of the visiting aliens, Hogan’s comedic temperament has always lent itself to understanding the assignment.  As effortless at comedy as she is, her collaboration with controversial filmmaker Lars von Trier in 2000’s Dancer in the Dark led to a more dramatic arc in her resume, managing material that often had a violent undercurrent.  It’s this mentality she’s adhering to for Rushed, her screenwriting debut focusing on the deplorable actions of fraternity houses pertaining to the hazing rituals that have so often turned fatal.

Hogan leads the charge as Barbara, a devout Irish Catholic mother of four, who spends her days tending to their needs and maintaining a certain positivity to keep the family spirit alive.  Her eldest son, Jimmy (Jay Jay Warren), is off at college, pledging to a frat house in keeping with the tradition embraced by his father (Robert Patrick).  Despite Jimmy assuring his oft-concerned mother that he’s surviving his college experience with minimal worry, the actions of the fraternity paint a different picture entirely; the hazing period he endures features some truly unnerving imagery.  Surviving the hazing is only one obstacle though, with the celebratory party of their newly found “brotherhood” leading to Jimmy’s demise when the house president, Steven (Jake Weary), in his own cocksure, drunken stupor, spikes his drink with crushed Xanax and inadvertently creates a cocktail that puts young Jimmy on life support in hospital.

Succumbing to the reality of Jimmy’s outcome, Barbara, in a bid to channel her grief, takes off across the US on a road trip, seeking out other mothers who have similarly lost their sons to barbaric rituals who similarly earned the response from their respective institutions that their son’s deaths were mere accidents; Rusty Schwimmer and Peri Gilpin provide beautiful support in single scene performances as two of the mothers still harbouring anguish.  With such a savage theme running at Rushed‘s core, Hogan’s script initially feels as if it’s going to embrace a more forgiving mindset and offset the brutal atrocities that drive the narrative.  This is an intentional move on behalf of Hogan’s encapsulation of Barbara, perennially sanguine and hopeful that she won’t be driven to anything drastic.  It’s a smart move too, keeping the film’s focus on the raw emotion and one’s own decision to not let tragedy define your being, made all the more effective when the film eventually turns to a revenge-themed opus, the story morphing Barbara from a woman trying to do the right thing into someone desperate enough to do the opposite.

The film’s climax hones a personality that, presumably, most audiences expect the entirety of Rushed to embrace.  Had this been a more mainstream effort, with a larger studio on hand and “name” talent, Rushed could have easily been the type of “everyday-man-becomes-vigilante” genre piece that usually attracts an actor of suitable stature to entertain the idea of violent justification.  And though Rushed flirts with this idea, there’s such a hopelessness and emptiness to this action that the film never feels exploitive.  Whether or not it completely gels with the rest of the narrative is a question, but Hogan is so tender, yet so furious that the film gets away with it.

Detailing an environment that Australian audiences can’t entirely comprehend, Rushed uncovers a tradition of American frat houses – and the subsequent cover-ups that seem to go hand-in-hand with the similarly-minded rape culture – that deserves a shone light.  To Hogan’s credit, this is a story free of cheap thrills and heavy on emotion, aiming to more showcase the tragic downfall of those left behind in the wake of actions that need to be held more accountable.

Rushed is currently screening in select cinemas across North America and available on VOD/digital.  An Australian release is yet to be determined.