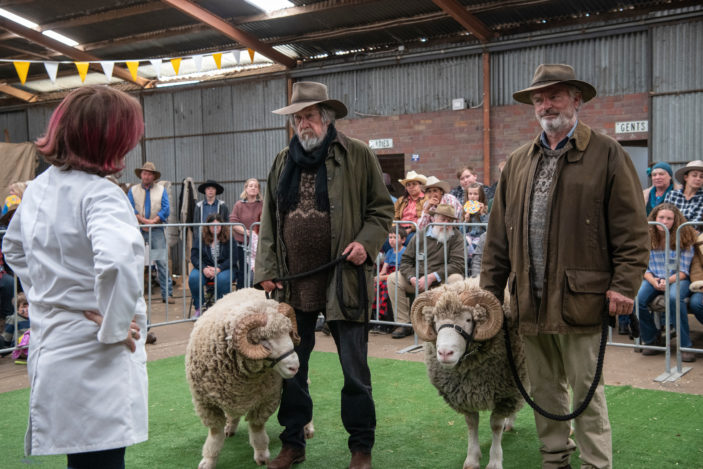 Despite being a reimagined take on the 2015 Icelandic drama of the same name, Rams feels distinctly Australian.  The brotherly rivalry between its lead characters – symbolised by their opposing sheep flocks – offset by the wonderfully captured Western Australian backdrop gives Jeremy Sims‘ occasionally amusing drama a homegrown identity, despite the fact that it’s lifting inspiration from a story set in an opposing country.

The thought of two brothers, in this case ageing rivals Colin (Sam Neill) and Les (Michael Caton), not speaking to each other for the better part of 40 years – mainly communicating when necessary at the sheep competitions they frequent – is a narrative that could either draw humour or dourness, depending on how the material is approached.  And though Jules Duncan‘s script is peppered sporadically with comedic inclinations, it’s mostly a surprisingly earnest affair.

The seriousness of the situation comes about quite early on in Rams‘ overly long 115 minute running time when Colin takes note of a deadly illness that plagues a number of the flock, including Les’.  Les naturally takes this initial news as Colin playing the bad sportsman card, unable to handle a loss against him, but confirmation from kindly vet Kat (Miranda Richardson) changes Les’ outlook, though it doesn’t warm him any further towards his estranged brother.

Whilst Rams clearly has enough of a narrative to drive a feature length, it’s a shame that there wasn’t more restraint shown in exorcising some of the filler material, with the near 2-hour running time unfortunately felt.  And audiences hoping for the more “loveable larrikin” Caton is synonymous with will be taken aback by his rather contemptible character here, his Les not exactly doing the most to endear himself for a large portion of the film.  Neill fares better with a more affable turn, whilst the rather delightful Richardson and the supporting likes of Asher Keddie and Wayne Blair do what they can with archetypal-framed roles.

A film that seems comfortable to coax by on its familiar, countryside aesthetic – which, unfortunately, extends to a few gender stereotypes – Rams very much has the older audience crowd in mind, which seems to both play in favour of and against Sims’ work.  Viewers hoping for a story that’s consistently entertaining from a subject point of view are likely to be underwhelmed at the rather monotone temperament adhered to, though its harmless, everyday-Aussie mentality will win over crowds who like their cinema uncomplicated, undemanding, and inoffensive.

Rams is screening in Australian cinemas from October 29th 2020.