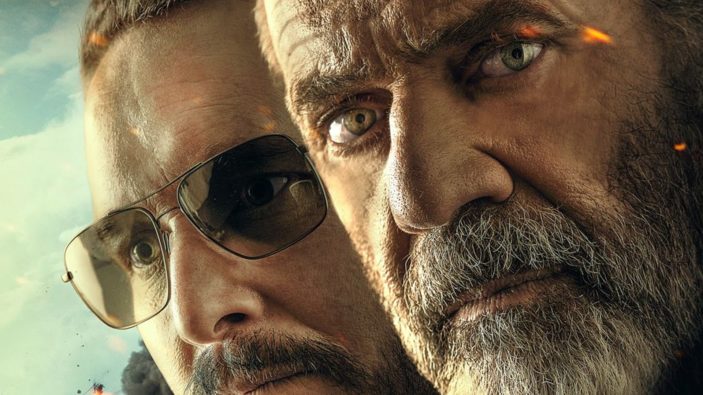 Sporadically seen but frequently heard throughout via storytelling-like narration that speaks to the throwback era of filmmaking Panama adheres to, Mel Gibson waltzes in and out of Mark Neveldine‘s action effort with little care as to how his scene chewing is going to disrupt the heavy lifting supplied by co-star (and actual lead) Cole Hauser.

There was a time when Gibson’s name meant something to a feature film, but after more than his share of controversies and wasted comeback promises his career trajectory seems largely relegated to features such as this, and, in all honesty, he seems to kind of love it.  At least in Panama it appears that way, swaggering through as a fast-talking CIA operative who convinces Hauser’s boozy ex-Marine, CIA freelancer Becker to negotiate a top secret arms deal in Central America.

“Let me tell you, there’s nothing more rock ‘n’ roll about taking out the bad guys for the Red, White and Blue” is how Panama introduces itself, telling you everything you need to know about the 90-odd minutes that are going to follow.  Neveldine, a director whose never been one to exercise subtlety on screen, with Crank, Gamer, and the Ghost Rider sequel on his resume, seems to be in on the joke too, or, at least, we hope he is, as heavy rock music and plucky electric guitar strings respectively accompany ridiculous violent set pieces and extended sex scenes that lean heavily into the 1980’s aesthetic the film clearly wants to emulate.

Being set in 1989 no doubt gives Neveldine something of an excuse to be so excessive too, and though these ingredients make it entertaining in all the wrong ways, the bombasticness of its material feels at odds with the serious narrative at hand; the CIA activity depicted here being technically illegal in 1989 opens up countless possibilities to delve deeper into a story beyond the physical action it conjures.  Then there’s the juxtaposition of Hauser and Gibson.  Both capable actors, Gibson, for all his personal faults, is undoubtedly the film’s strongest component.  His wild energy is needed throughout, lifting the sullen Hauser who, though committing to the depression of his character, feels second fiddle to his co-star whenever bouncing off him; hell, even Gibson’s narration outshines him.

Somehow frenzied and lumbering at the same time, Panama will tickle those with a penchant for the overindulgent nature of the 1980’s action movie, but most will be off-put and bored by its cliched approach to a story that deserves to be handled better than the laughable movements made way for here.

Panama is screening in select theatres, digital and On Demand in the United States from March 18th, 2022. It will be available to rent and/or buy on DVD and Blu-ray in Australia from May 18th, 2022.