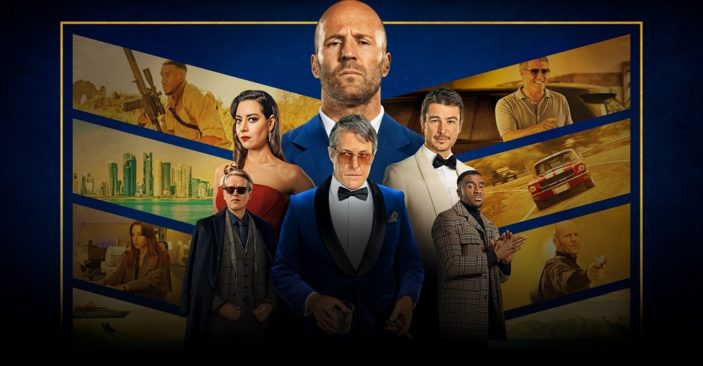 Originally scheduled for an early release starting in January of 2022, the sudden pulling of Operation Fortune: Ruse de Guerre from the theatrical schedule certainly didn’t bode well for a film that, from all appearances, seemed like a certified success.  Yes, it wasn’t uncommon for films to shift during the time period due to the COVID-19 pandemic – though, let’s face it, by early 2022 it was considered a surprising non-issue – but in the case of Operation Fortune, it wasn’t the pandemic that stilted its release, it was politics.

Given that the big bads in Guy Ritchie‘s suave spy comedy were of Ukrainian nationality, the producers felt it was in poor taste to have these villains be depicted as such in light of the on-going Russo-Ukrainian war, so the film was shelved with streaming as its seeming fate.  Whilst the film is yet to have any definitive release in the United States, its international distributors thought otherwise, so we now have the pleasure of meeting Ritchie’s latest not-so-rag-tag team of secret operatives ahead of many other countries; and, if you know Australian distribution, that certainly isn’t always the case.

In terms of Ritchie’s back catalogue, Operation Fortune isn’t quite as wicked or gritty as Snatch, RocknRolla or The Gentlemen, but it does have his flair for global aesthetics and a well-oiled ensemble who all commit thoroughly to their archetypal characters that they each elevate off the page; Ritchie co-writing said pages with frequent collaborators Ivan Atkinson (The Gentlemen) and Marn Davies (Wrath of Man).

Another of Ritchie’s frequent collaborators back on board here is Jason Statham, continuing to effortlessly lean into his brand of dry charm as the spectacularly named Orson Fortune, a no-nonsense spy who is often tapped by the British government for the type of operations they would rather keep quiet from the officials.  Under the direction of Nathan Jasmine (Cary Elwes), an MI6 operative who seems to always stay calm regardless of the danger he (or his team) are placed in, Fortune is assigned to infiltrate the selling of a convenient narrative macguffin from falling into the wrong hands, lest their be global destruction on his hands; here the macguffin is something known as “The Handle”, and the wrong hands would be that of eccentric billionaire Greg Simmonds (a fabulously cheeky Hugh Grant), an arms dealer looking to sell it for a few more billion to Ukrainian terrorists.

Not being able to intercept alone and, sadly for Fortune, unable to work with his usual crew, Nathan assigns the duo of Sarah Fidel (an always entertaining Aubrey Plaza, clearly relishing her Bond girl fantasies), a sarcastic comms expert, and J.J. (Bugzy Malone), a jack-of-all-trades-type, to accompany Fortune on the mission, one that initially sends them to Cannes in a bid to infiltrate one of Simmonds’ parties and learn more about the whereabouts of “The Handle”.  Whilst Fortune is enough muscle to handle things physically and Sarah has an alluring quality to her – something that tickles the fancy of Simmonds – it’s not enough to truly get close to him, so it’s bloody good luck then that Simmonds’ favourite actor happens to be action star Danny Francesco (Josh Hartnett), who Fortune has recruited for the mission in anticipation.

Now that the gang’s all here, Operation Fortune can begin.  And it’s with such a mentality that might irk any Ritchie enthusiasts thinking the film will be in line with his gangster efforts or general audiences who hope it’ll be an action film that favours set-pieces over intelligence.  Operation Fortune sits somewhere in the middle, serving as an actioner that has its share of exciting sequences but also committing itself to a level of exposition that requires a certain amount of focus from those in attendance.  It requires just enough brain power to stay in tune with the ins-and-outs of its plot, but then makes sure that there’s enough loud noises, sexual innuendo and well-timed gags to offset its own intelligence.

As it flits between the likes of Turkey, France and Qatar – Ritchie thankfully expressing his eye for appreciating the art of location photography along the way – Operation Fortune hits most of the story beats you expect, but when there’s an obvious wink to the audience that everyone involved knows exactly what genre they’re in, it gets away with any narrative predictability it might succumb to; I mean, we should absolutely expect a slowed-down shot of Aubrey Plaza shooting a handgun out the window of a swerving car at some point, and, wouldn’t you know it, we get it and it’s an absolute serve.

Speaking of Plaza, she’s one of Operation Fortune‘s greatest assets, with the film utilising her usual deadpan shtick but adding a sense of femininity to the role that she isn’t always afforded when playing the comic relief.  For his part Hartnett leans wonderfully into the mindset of Francesco, an actor whose own vanity makes him easily manipulated throughout, and his back-and-forth with both Statham and Plaza lets Ritchie’s predominantly comedy-driven script pop when needed.  But, perhaps unsurprisingly, it’s Grant that truly dominates, devouring the scenery with a camp energy that continually picks the film up whenever it starts to favour anything overtly serious.

Though Operation Fortune: Ruse de Guerre may not be the most original or exciting spy film, it’s still a hell of a good time out at the theatre.  Ritchie knows how to make a picture look and sound good, and, if nothing else, Grant’s ridiculousness and the commanding female energy of Plaza are more than enough to step away from the monotony of surfing a streaming service and get back into a cinema seat.  Keep your expectations level and you’ll find this is one operation worth accepting.