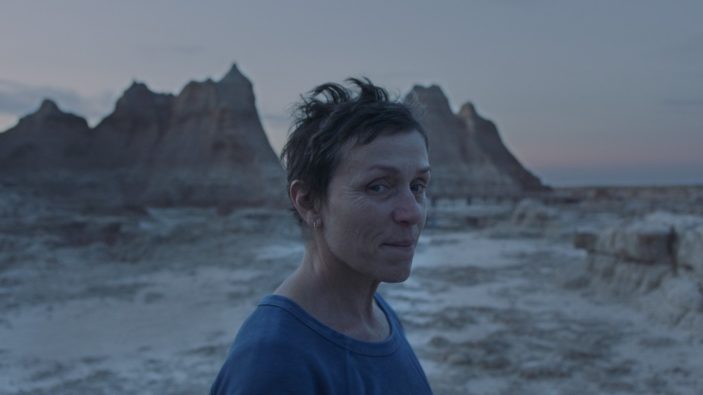 The opening of Chloe Zhao’s Nomadland opens with a sobering statistic.  In Nevada, a small town – Empire – has essentially become a ghost town due to the local Gypsum plant closing down amid the recession.  The Empire residents, most of whom lived in company-owned homes, had to vacate in masses, deactivating the town’s zip code in the process.

A quasi-documentary, Nomadland is Zhao’s love letter of sorts to the unsung pioneers who aren’t afraid to brave their own trail in even the harshest climates.  Set against the backdrop of economic instability and an uncertain climate – sound eerily familiar? – Frances McDormand’s resilient Fern is the narrative’s primary focus.  She’s a survivor, a prideful woman who accepts no hand-outs and expects no charity despite losing her husband, her home, and steady employment.

Seasonal jobs – when the film starts she’s at the tail-end of a stint as a packager for Amazon – support her minimalistic lifestyle, and in spite of her loneliness there’s a certain contentment she has in living out of her camper van, moving to and from different communities of like-minded people.  Knowing she’s not alone in this type of existence fuels a certain gratification within her, and as a result she uncovers her own holistic identity.

As appointed by fellow nomads Linda May and Swankie (real-life nomads, both of whom play themselves), Fern is a “beginner nomad”, but she readily embraces this new chapter in her life, travelling across America to seize whichever opportunity she can afford.  It may not be the pre-packaged  “American dream” that everyone is sold, but it proves to be her own form of sanctuary, and witnessing Fern find an inner peace and resolution pertaining to her existence is as aspirational as any other personal success story.

Nomadland is one of the most natural films I have ever seen.  There’s a calmness and beauty to it that is truly a testament to the detailed professionalism of both Zhao and McDormand.  Zhao has created a peacefulness amongst a larger-than-life representation of nature and one’s own relationship to it, and McDormand feels so in tune with Fern that no other actress feels like they could have that role justice; her natural energy and charisma so intimately channeled.

In any other year Nomadland would have made a lasting impression regardless, but in 2020, a year where looking inward as to what we have and examining our own priorities has felt even more prevalent, this impossibly beautiful and insightful film rings true even stronger.  An emotionally-charged masterpiece, Nomadland is a celebration in owning your happiness – in whatever form that may be.