Film Review: No Exit has fun embracing lunacy-driven thrills within its claustrophobic setting 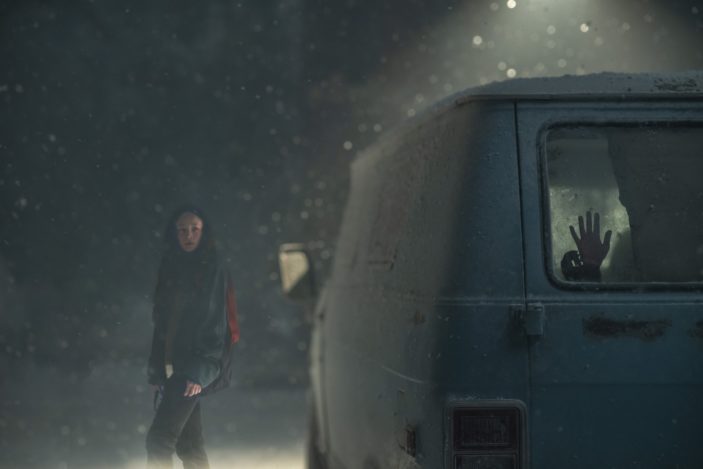 Though there’s nothing particularly original about No Exit, the sheer commitment from lead Havana Rose Liu serves the film enough benefit that its genre simplicities and narrative lunacies are somewhat forgiven.

Initially, Australian filmmaker Damien Power (Killing Ground) aims for a dramatic temperament, introducing Liu’s Darby as an addict in recovery who has all but been abandoned by those closest to her.  Though she’s kept abreast of the health situation plaguing her mother, her being informed feels more of a familial obligation rather than genuine concern, but in spite of her treatment she’s able to escape the rehabilitation centre she so desperately is trying to leave.

This would all be well and good (well, within reason) if there wasn’t a blizzard causing treachery on the Utah mountain road the film is set within, and with no other choice than to wait it out, Darby seeks refuge in a rest-stop that introduces a quartet of players whose suspicious personalities all give way to the mystery she inadvertently uncovers.  There’s married couple Ed (Dennis Haysbert) and Sandi (Dale Dickey), the charming Ash (Danny Ramirez), and the nervous Lars (David Rhysdale), oh, and a kidnapped young girl (Mila Harris) held in a van that implicates one of the aforementioned four as her captor.  What a time to solve an abduction.

Going against the usual grain of these types of moderate-budgeted thrillers – the sort of films that would’ve dominated the box office in the mid 2000’s off the presence of an Ashley Judd or Jodie Foster at the helm – No Exit reveals its villain before the halfway mark.  This isn’t to the film’s disadvantage though, as so much of the Andrew Barrer/Gabriel Ferrari-penned script banks on the latter moments to lean in to the insanity of its convenient, twist-heavy plot.  There’s no question the film flirts on the edge of utter insanity, but Power has enough hold of his material to not completely dwindle in the manner that so many other streaming-specific directors do (No Exit was originally planned for a theatrical release), reminding us of his brutal inclinations with some chaotic violence that further elevate the film’s trashy thriller mentality.

Anchored by an ensemble cast that’s stronger and more capable than what a film of this ilk deserves, No Exit isn’t breaking any new ground with its claustrophobic setting and coincidental-heavy plotting, but it’s difficult to deny the fun it provides in embracing genre lunacy with an energetic temperament.

No Exit is streaming now on Hulu in the United States and on Disney+ in Australia.