Film Review: My Policeman has grand intentions but mediocre execution 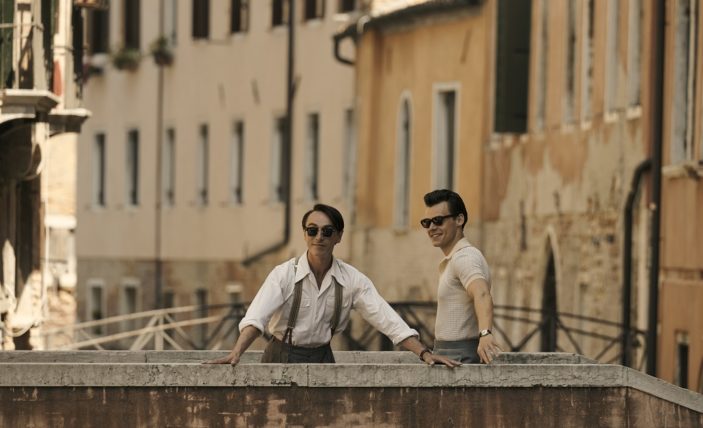 Given how wild everyone – or teenage girls, to be a little more accurate – are for pop’s main man-candy Harry Styles, it will no doubt throw much of his female following off as to how graphic the sexual scenes are in My Policeman, a queer love story that perseveres with grand intentions but, sadly, crumbles under its own mediocre weight.

Much has been said about Styles’s role in the film – and his other venture, Olivia Wilde’s overly discussed Don’t Worry Darling, seems to be similarly earning a lot of traction off his supposedly questionable performance – and whilst he tries his hardest, a combination of his own uncertainty as an actor and the more established ensemble around him results in him being even more of a sore point in a story that’s undoubtedly important for furthered queer representation in cinema.

Those aforementioned sex scenes seemed almost shoehorned into an otherwise gently paced drama, one that spans between the 1950’s and the 1990’s as a young Tom (Styles), the titular policeman, and Patrick (David Dawson), a museum art curator, form a friendship that quite quickly blossoms into an intimate relationship that neither was expecting.  Patrick’s sexuality seems quite obvious – it helps that  Dawson’s facial features have a sensual androgynous quality to them – but Tom is more taken aback; him being in a seemingly loving relationship with the smitten Marion (Emma Corin, the film’s undeniable standout) playing into his confused temperament.

Tom appears far more at ease when he’s tending to Patrick (take that as suggestively as you will), but he seems so steadfastly determined to make his marriage work, even if his sexual nature with Marion is tepid.  Ron Nyswaner‘s script flirts with some of the legal and societal implications that came with being a homosexual in the 1950’s, and when it does address this Michael Grandage‘s occasionally erotic drama feels like it holds some relevance.  Sadly, it aims to be more of a love story, bypassing much of the aftermath as to what being gay in the 1950’s meant for a more open man like Patrick and a closeted one like Tom.

Such sequences as Marion baring witness to Tom and Patrick’s attraction feel less impactful in a post-Brokeback cinema landscape, and though Linus Roache, Gina McKee, and Rupert Everett all deliver fine turns as the older counterparts of Tom, Marion, and Patrick, there feels like there’s far too much unexplored when we really look at their dynamic.  Patrick is sadly jailed for two years for public indecency, and the sexual revolution of the 1960’s and 1970’s surely had to further add strain to Tom and Marion’s relationship, whether that be his wandering sexual preferences or the fact that they seemingly remained quite asexual as a couple, but we’re left with no particular closure, with Grandage hoping that leaning into a romantic mentality between Patrick and Tom will be all audiences care about.

Not necessarily a bad film as it is one that wants to feel more important than it is, straight audiences will probably view My Policeman as something quite revelatory, whilst queer audiences will see the merit here but won’t be blinded by its glossy, slightly manipulative sheen.  Ultimately, we do have Styles to thank for at least bringing attention to a queer love story though, and kudos to him for giving himself to the role so entirely, but organic representation is still a predominant component missing in our own cinematic stories.

My Policeman is now available to stream on Prime Video.