Film Review: Moonfall is an explicable cluster of sci-fi nonsense 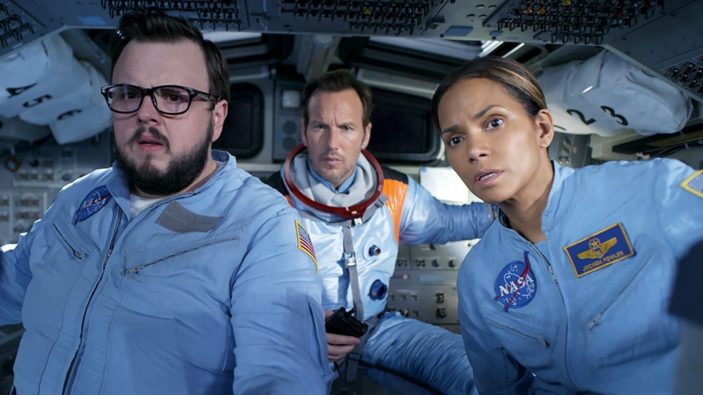 Known as the “master of disaster”, due to his penchant for predominantly large-scale destructive narratives, director Roland Emmerich has, once again, assembled an abundance of special effects, overt exposition, and stock standard human characters for his latest suspension of disbelief – Moonfall.

Whilst his varied directorial career is littered with some genuine genre gems – 1996’s (at the time) ground-breaking Independence Day and 2004’s The Day After Tomorrow both worthy titles – and the occasional guilty pleasure (1998’s much maligned Godzilla says hello), when he fails to understand the assignment, it’s a fittingly destructive downfall.  And though something like Moonfall has all the ingredients necessary to be either genuinely entertaining or a guilty pleasure, or even something so bad it’s entertainingly good, he takes proceedings far too seriously that it ultimately just ends up being a clusterf**k of inexplicable proportions.

The title is as literal as you expect with the moon drifting out of orbit and falling towards Earth, naturally causing chaos in the lead-up to its inevitable crashing.  Time is running out, but we thankfully have a trio of human saviours on hand – Patrick Wilson‘s disgraced astronaut Brian Harper, Halle Berry‘s NASA executive-turned-head-of, Jo Fowler, and John Bradley‘s conspiracy theorist KC Houseman who, naturally, knew all of this was happening before the higher-ups did; we even get a classic “Look at the data” scene where he’s ushered out of the premises as he throws the data-containing paper in the air for all to read.

Whilst Wilson is a charming enough presence to make even the most bonkers material work, Berry plays it straight and saves face, and Bradley leans into the expected archetype of awkward comic relief – though here he’s wildly unfunny and more annoying than endearing – they aren’t served well by a story that, as crazy as it is, tries to overcompensate for its destructive mentality by honing an intellectual sci-fi additive that’s too far-fetched for its own good, and any entertainment value the film found in its end-of-the-world footing is entirely undone.  The trio heading to space to figure out a plan to knock the moon back into its orbit is, somehow, the most grounded section of the plot, with the eventual reveal behind the moon’s shift and the entirety of the remaining human characters on Earth merely extending the film for indulgence sake.

A surprisingly under-utilised Michael Peña, a blink-and-you’ll-miss-him Donald Sutherland, and an entirely bored-looking Charlie Plummer are absolute deadweight here, all supposedly adding conflict and drama to the Earth-set story, but doing nothing more than adding unnecessary minutes to an entirely over-stayed running time; its 130 minute clocking adding insult to the audience’s injury.  If Emmerich had leaned further into making a cheesy, B-grade picture, where everyone playing it straight was part of the joke, Moonfall could have truly been something.  As it is, it’s unsure how it wants to present itself, and therefore, whilst there’s fun to be had in how incomprehensible it all is, it never really becomes the fun type of watch you wish it would be.

Though there is something of a passably enjoyable 90 minute disaster flick in here, its overblown padding, lack of personality, and absolute void of common sense – which, yes, is different from suspension of disbelief – results in Moonfall orbiting out of worthy cinema, unable to find the right path back to a recommendation.