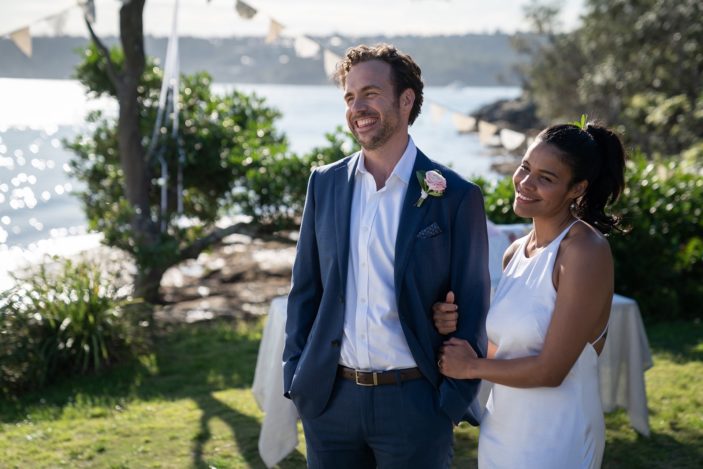 The tried and true formula of the “time loop” sub-genre in film has been adopted many a time; the Happy Death Day films, Edge of Tomorrow, the recent Palm Springs, and the seminal Groundhog Day being arguably the prototype for such offerings.  For Long Story Short, the sophomore effort from Australian writer/director/actor Josh Lawson (The Little Death), the narrative is less about reliving the nominated day and more to do with fast-forwarding and losing a grip on the precious time we are afforded.

So is the dilemma for everyman-type Teddy (Rafe Spall, utilising his likeable, manic energy to good use), a serial procrastinator who has taken his sweet time in proposing to patient, supportive girlfriend Leanne (Zahra Newman, the theatre performer making her film debut here).  Now that he has proposed, he suddenly finds himself married within two weeks when an odd encounter with a strange woman (None Hazlehurst) prompts him to do so, jumpstarting the hopeful bliss of wedded life for the two.

After falling asleep on his wedding night, Teddy awakes the next morning to an inquisitively decorated home and a visibly pregnant Leanne.  What he initially palms off as a vivid dream soon becomes a harsh dose of “reality” when he realises that every few minutes he is transported a year in the future, noting the changes – mostly for the bad – of his life with Leanne and how they don’t at all play into what he imagined.

The concept of a man realising he needs to seize more opportunities and not take his loved ones for granted isn’t particularly original, but Lawson manages to inject an earnestness into proceedings, avoiding anything that’s particularly mean-spirited or overtly cynical.  He also resists the urge to play on any gags about the changing future or topical events, instead letting his incredibly capable cast bounce off each other with a natural rhythm that consistently elevates the film whenever it rests on standard tropes.

Under Lawson’s guidance – the writer/director also giving himself a minor supporting role as one of the many unexpected elements Teddy comes across during his “travels” – Spall proves immensely captivating as the film’s main reason for staying on course as much as it does, delivering an endearing performance – maintaining such even if his character borders on frustrating.  Next to the incredibly luminous Newman, the other ace Long Story Short has up its sleeve is Malaysian comedian Ronny Chieng.  Playing Teddy’s best friend Sam, the actor earns some of the film’s biggest laughs (“You know ‘Groundhog Day’ isn’t a documentary” is his matter-of-fact retort when Teddy is trying to decipher his predicament), as well as featuring in one of the more emotional arcs, further driving home the importance of not taking one’s own life for granted.

Whilst there’s cliches adhered to and there are some characters that don’t feel as fleshed out as they could, Long Story Short nonetheless expresses the importance of time and of relationships – whether that be with friends, partners or family – without resorting to too much emotional manipulation.  A more accessible feature from Lawson, this breezy romantic comedy showcases his confidence as a filmmaker and storyteller, suggesting that he hones the intelligence and wit to play with a tested formula enough for it to appear fresher than expected.