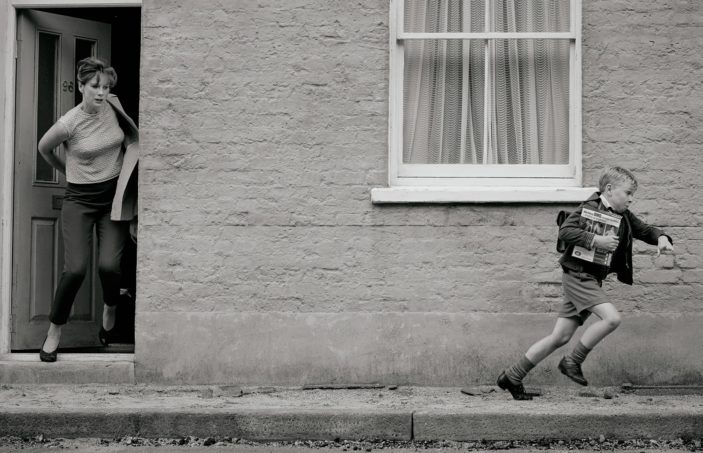 Given that the lockdowns that every country seemed to adhere to at some stage or another since COVID-19 plagued an unsuspecting public caused many to examine their own sense of self, it’s not surprising that something like Kenneth Branagh‘s Belfast would be born from such introspection.  Written from his own perspective as a 9-year-old growing up in the Northern Ireland capital, the film’s script was completed by the first half of 2020, with the filming itself undergoing by September.

The most personal story Branagh has told, yet one of his directorial efforts he opts out of as an actor, Belfast begins in crisp colour, as aerial shots highlight the city before a lush monochrome lacing transports us to 1969, where the street level views of the idyllic town suggest an air of tranquillity.  Neighbours happily chat as if the word stranger is a foreign concept and the children enthusiastically play with one another without a care in their psyche.  It’s their own little piece of the world.

Within seconds the harmony is shattered.  Petrol bombs, stonings, and exploding cars break the paradise the town knew, and for 9-year-old Buddy (newcomer Jude Hill, brilliantly embodying the younger self of Branagh) it’s the beginning of a new examination for his family and their decision to stay in Belfast.  Buddy’s Ma and Pa (Caitríona Balfe and Jamie Dornan) project nothing but love for their family – even though Pa is struggling to pay off a hefty tax debt – and the furthered affection from his grandparents, Pop (Ciarán Hinds) and Granny (Judi Dench), bathe the film in an almost unnaturally positive glow.  But this optimism and joy is clearly deliberate.  Branagh has always been a director aware of how to move an audience, so why not embrace sentimentality to its maximum effect for a film that is so evidently personal and a remembrance of a time that he clearly reflects on with fondness.

The child-eye’s view in which Belfast is being viewed through earns the film a certain forgiveness when it comes to the innocence the film conveys through its imagery.  There are atrocities taking place all around Buddy and such uncertainty in how his parents will keep the family afloat, and yet there remains a wondrousness to his reality, further moulded by the films he watches at the cinema – there are some beautiful shots of him watching Chitty Chitty Bang Bang in striking colour – and the accompanying soundtrack, a Van Morrison-heavy collection of eight classic songs and one written specifically for the film itself, additives that drive home the wholesome mentality the film is able to convey in the face of savagery.

With such uncertainty in the world, a feeling that has unfortunately made way for unlawful acts to earn more prominence than should be afforded, the release of certain films has never felt more timely or needed.  Yes, it’s entirely cliché to still refer to a film as “the movie we need right now” – I’m sure I’m guilty of such wording – but when something so ultimately joyous is released, regardless of its obvious emotional ploy, it’s difficult to not want to repeat the same wording for something as life affirming as Belfast.

Belfast is screening in Australian theatres from February 3rd, 2022.