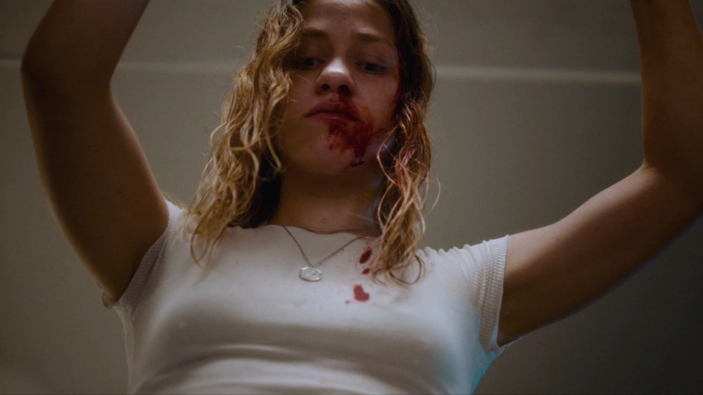 Kandisha tells the story of three young teenage women Amelie, Bintou and Morjana (Mathilde Lamusse, Suzy Bemba and Samarcande Saadi); three childhood friends who are enjoying their summer break in the dilapidated streets of Paris. Chilling out with their peers, branding walls with splatterings [sic] of graffiti; it is all about living in the moment one day at a time regardless of what life throws at you.

One night, the girls are out on their nightly trip of branding in an abandoned apartment complex that is scheduled to be demolished. There they share stories, which include a Moroccan urban legend of Kandisha, a supernatural force embodied as a woman who kills men. Bintou and Morjana laugh it off while Amelie remains reticent over the whole thing.

But things take an extremely dark turn when Amelie gets assaulted by a tenacious ex-boyfriend. During her anguish, Amelie inadvertently casts out Kandisha and the ex-boyfriend mysteriously ends up dead. Not wanting to dwell any deeper on the matter and seeing her friends reacting the death as an act of good riddance on behalf of Amelie; they all brush it off. That is until more deaths of men begin to occur; which sees the girls on a mission to stop Kandisha from killing. The three of them may be safe but what about their loved ones including Bintou’s father or Amelie’s younger brother?

Kandisha is the latest film from French filmmaking duo Alexandre Bustillo and Julien Maury; who are famous for their ventures into horror (being partly responsible for the New French Extremity thanks to their debut 2007 slasher film Inside). Since then, their output has had their ups (the fantasy-horror film Livid and the backwoods survival flick Among the Living) and downs (the middling Texas Chainsaw entry Leatherface). How does Kandisha rank in their filmography?

On the positive front, the performances from the leads are convincing, believable and even poignant; particularly from Lamusse as Amelie who easily engenders sympathy from her wilful character. The chemistry between the three provides the film with the much-needed heart to make the horror palpable, even when the proceedings in the story become quite predictable.

As for the genre thrills; Bustillo and Maury have not held back on what made their horror efforts stand out which is the gore. There are lashings of bodily trauma and injury detail peppered throughout as Kandisha wreaks havoc (including a shocking sequence that features human flesh ripped to shreds as if a kindergartener playing with a piece of paper).

However, the real horror they explore in the film is the experiences of young women under the looming threat of patriarchy; whether it’s through misogyny, power plays, social status and objectification; the filmmakers do a good job in making that the true horror behind the genre flashes by without coming off as sanctimonious or blatant.

On the negative front, the story itself is predictable. The filmmakers are cine-literate of prior horror films like Bernard Rose’s Candyman. However, all the tropes in the film are there (threat is established, scepticism, deaths occur, investigation/exposition and so on) and Maury and Bustillo do not lend enough innovation to make the film transcend its limitations to become something much more.

Overall, Kandisha is an effective effort from Bustillo and Maury that manages to provide the requisite genre thrills with carpentry-like precision. But it lacks a certain spark to become something that will truly linger in the minds of the audience long after it is over.