Film Review: In The Heights is a feel-good reminder of the joy of the big screen musical 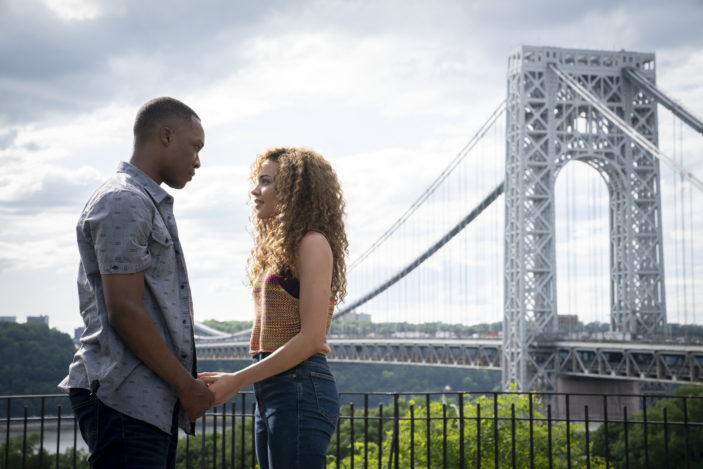 Any film that has an air of positivity about it can all too easily be framed as “the movie we need right now” coming off the global lockdown stage of the pandemic.  Sure, a film that makes you laugh, smile, or cry (in the good way) is going to be enough of an escape after this last year, but In The Heights, director Jon M. Chu‘s colourful, exuberant adaptation of Lin-Manuel Miranda‘s 2008 Broadway success, is truly the definition of such a phrase.

Encompassing a plethora of thematics across its 143 minute running time – gentrification, racism, and education, among others – Chu’s film ultimately encompasses the importance of home and identity.  Such is the conflict for Usnavi (Anthony Ramos), a bodega owner in the New York neighbourhood of Washington Heights, who intends to emulate “the best years of his life” by returning to his homeland of the Dominican Republic in a bid to honour the work of his late father.

Easier said than done in the financially-strapped neighbourhood, Usnavi’s dreams of making it out of The Heights are mirrored in Vanessa (Melissa Barrera), his could-be girlfriend, whose fashion designer aspirations have driven her towards applying for an apartment downtown, much to the chagrin of her current employers, the gossiping salon trio of Daniela (Daphne Rubin-Vega), Carla (Stephanie Beatriz) and Cuca (Dascha Polanco).

On the opposite side, having escaped the neighbourhood but unsure if it was truly the right move, Nina (Leslie Grace) has returned from her first year at Stanford, questioning her motives and whether she’s truly the prized investment her father (Jimmy Smits) thinks she is; this predicament extending itself to Benny (Corey Hawkins), who both works for Nina’s father and holds a candle for her.

As character-heavy as that sounds, and to be fair In The Heights has a particularly extended ensemble, Quiara Alegría Hudes‘ screenplay is never muddled or undone by its necessity to cover all of its character bases.  Similarly, any of the intimacy or on-stage magic evoked from the live production are easily recognised traits by director Chu (Crazy Rich Asians, Step Up 2: The Streets), who is able to take that sense of in-person magic and tailor it to the big screen with a bold sense of colour and extravagant choreography (courtesy of Christopher Scott) that recalls to mind the classic musicals of decades gone by.

Usnavi wiping his foot on a sewer cover as if he was scratching a record, the Fred Astaire-influence behind watching Benny and Nina defy gravity as they dance on the literal walls of their apartment block, and the mix of aggression and precision in the dancers at an underground salsa club all lean into Chu’s understanding of his environment and amplify Miranda’s creative vision of celebrating the Latinx community.  There has been much said about the lack of diversity within the film’s cast pertaining to the exclusion of darker skinned Afro-Latinos, but as it is an argument I am not at all entitled to comment on, and given that Miranda himself has acknowledged this, it’s an issue that I hope won’t stain such a joyous production that absolutely has its heart in the right place.

With such a long running time and a certain predictability to its storyline, it’s easy to further criticise such a film, especially as it flirts that fine line in not coming off as overtly cheesy when the sing-talking style of dialogue is adopted.  Characters singing about both their woes and minor annoyances could test audiences, even those that enjoy musicals, but In The Heights is so acutely aware of what type of film it is and what it wants to be that it’s able to override the majority of its criticisms.

A feel-good reminder of the joy of the big screen, In The Heights is an homage to cinema on the surface, but a love letter to its community at its core.  It commands your attention at every moment, from the loud ensemble set-pieces (the poolside location for number “96,000” is an absolute showstopper) to the quieter, more tender minutes, with Olga Merediz as Abuela Claudia likely to warm your heart before utterly breaking it.

So yes, as predictable as it may be to announce so, In The Heights is the movie we need right now.  The world may feel like it’s taking steps forward but there’s nothing stopping it from back peddling either, and Chu’s cathartic choir is unequivocally the antidote needed in surviving another day.

In The Heights is screening in Australian theatres from June 24th, 2021.