Film Review: I’m Your Woman is a slow burning thriller anchored by a phenomenal Rachel Brosnahan 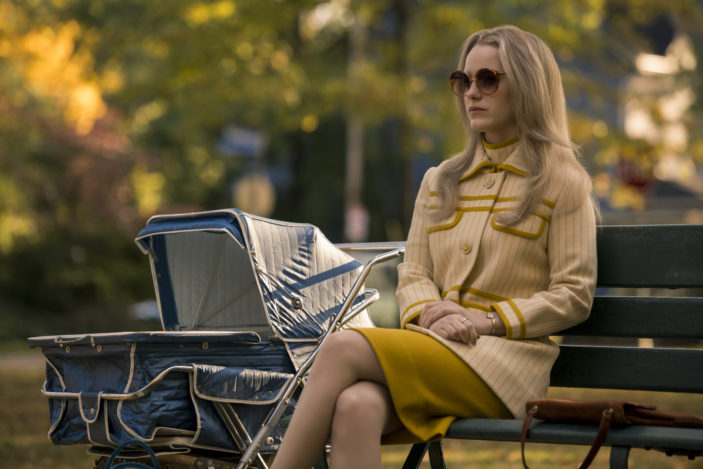 You’d be forgiven for assuming I’m Your Woman is going to be a ferocious, revenge-driven thriller going off the simple, yet striking poster art that accompanies.  Rachel Brosnahan, decked in a long trench coat, a baby on one arm, clutching a gun with the opposing hand.  It’s a hell of an image – provocative, even – but it’s not exactly ringing true to what director/co-writer Julia Hart (Fast Color) ultimately presents.

That’s not to say there isn’t an air of revenge running as an undercurrent to the narrative, nor that you won’t be treated to bouts of violence, but there’s a deliberately stilted pace that makes this more of a character study, rather than a hurried effort; those familiar with Hart’s work will likely proceed more comfortably than the average viewer.

Set in the 1970’s, I’m Your Woman places focus on Jean (Brosnahan, absolutely dominating the film), a bored homemaker married to the likeable yet smarmy criminal Eddie (Bill Heck).  As we learn throughout that starting a family has been a challenge for the couple, Eddie’s surprise offering to Jean one afternoon of a newborn baby holds a lot more weight than merely being bizarrely unexpected.  Eddie’s shady dealings keep him from daddy duties, or even explaining just how he came to be in possession of such a child, and Jean has no choice but to accept the responsibility of motherhood.

When Eddie goes missing and she’s informed that her baby needs to be kept a secret, Jean is thrust into the criminal world she seemed so intent of staying naive to.  Assisted by one of Eddie’s underlings, Cal (Arinze Kene), a kindly type who has quite the way with infants, Jean slowly uncovers just who her husband is, bringing into question her entire existence, which, up to that point, hadn’t actually been much of a reality at all; it’s a painted picture of boredom for Jean, who appears to be dressing in the finer clothes for no real purpose at all.

Paranoia runs rampant throughout the film, but in a paused manner that gives way for sequences of extended dialogue and suggestive exposition.  Chaos is saved, and it’s when the film surrenders to unbearable tension that it evokes excitement.  This is never more prevalent than when we are introduced to Evelyn (Marceline Hugot), a nosy neighbour who upsets Jean’s monotonous routine by paying her an unannounced visit.  We’re immediately put on guard as viewers, unsure if Evelyn is someone expressing genuine concern or an extension of Eddie.  The threat this scene suggests temporarily represents the film I’m Your Woman is selling itself as, but Hart’s deliberate mood ultimately returns, continually laying out focus without giving into violent aesthetic pleasures.

The leisurely manner in which I’m Your Woman travels is one that teases escalation – a set piece at a disco billows with potency – but the arc of discovery for Jean is truly where Hart intends her narrative to spiral.  Brosnahan is present for every frame, simply divine in a role that isn’t the easiest to keep from slipping into a sense of pity, and she’s well supported by the quiet intensity of Kene, as well as Marsha Stephanie Blake as his wife who offers Jean an understanding as to who Eddie truly is, perhaps in a manner that’s more than she wishes to know.

A slow burning experience that’ll test the patience of some viewers and enthral others, I’m Your Woman is an examination of learning self-sufficiency in both marriage and motherhood against the violent grain of the criminal underworld.  Phenomenal performances and a dedication to the aesthetic intricacies of the 1970’s period could keep Hart’s film afloat for casual viewers, whilst only further enveloping those that appreciate the supplemental temperament of good storytelling.

I’m Your Woman will be available to stream on Amazon Prime Video from Friday December 11th, 2020.