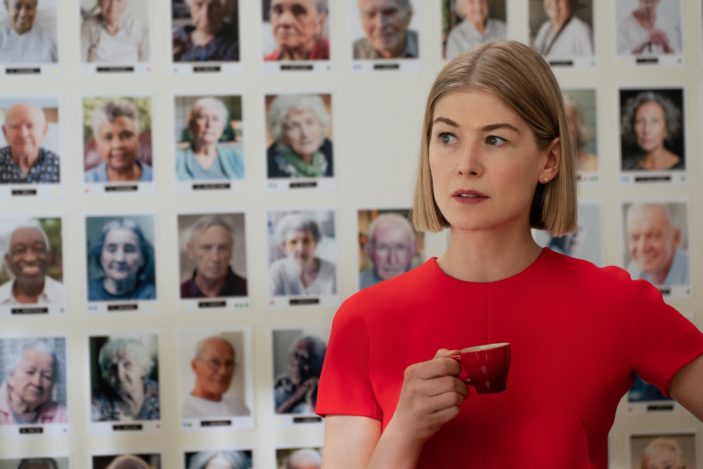 Given just how maliciously magnetic she was in Gone Girl, it makes sense that devoted fans would be awaiting another Rosamund Pike performance that allows the actress to delight in all the dark ambition so evident in her Oscar-nominated turn.

That’s certainly not to say she hasn’t been delivering the goods in the years since, but efforts like Return To Sender, Beirut, and Radioactive weren’t exactly of the calibre she deserved, and there’s such joy to be found in her ability to rip through a nasty script with a smile that you can’t help but find her morally bankrupt character in J Blakeson‘s I Care A Lot incredibly investing.

In the nicest possible language her Marla Grayson is an antihero of sorts, a professional dedicated to her job who just so happens to take advantage of the profitability margins that so many others wouldn’t dare to investigate.  Her line of work is that in the guardianship of the elderly – supposed patrons of the state who don’t have any family present or sound enough to look after their wellbeing and belongings.

Due to Marla’s own wily nature she’s been able to skim some of that extra coin from said patrons, amassing herself something of an empire in the process.  As is the case with all money-hungry moguls though, too much is never enough, and when her hospital insider (Alicia Witt‘s similarly-minded Dr. Amos) informs her of a “cherry”, i.e. someone untouched with a clean background, no family to their name, and a hefty fortune, Marla gets to work on what could be her biggest payload yet.

With her villain-approved blonde bob, spiky stiletto heels, and practically weaponised vaping tool, Marla assumes that she can walk all over the timid Jennifer Peterson (Dianne Wiest), the aforementioned cherry who is apparently showing signs of early onset dementia, which therefore requires her to be under immediate care.  The ease at which Marla and her partner Fran (Eiza Gonzalez, finally earning a role that doesn’t rely solely on her aesthetics), both personally and professionally speaking, manage to extract monetary value from Jennifer’s possessions is far too great, so when the smooth-talking but hard-hitting “lawyer” Dean Ericson (Chris Messina) makes his presence felt with considerably violent threats, it becomes all too apparent that Jennifer isn’t exactly who she claims to be.

Once it’s evident that Marla has metaphorically gotten into bed with the wrong people, Blakeson’s script takes its share of bold strides, which benefit the likes of Pike and Peter Dinklage – the actor straddling the line just enough as a shady, man-bunned adorned gangster – but can’t help but amplify the disconnect between the film’s plotting and its tone; there’s an almost satirical nature to some of the film’s early scenes that seem at complete odds with the violent revenge thriller it descends into.

Despite this tonal shift, I Care A Lot doesn’t suffer as an overall product due to the fact that it remains consistently intriguing, even if it feels more episodic than fluid in its narrative approach.  And then of course there’s Pike.  Not to take away from the likes of Dinklage or Wiest, but no one in the cast matches the devilish brilliance she’s able to convey, walking in, out, and away with the film with an ease that further proves just how much better a project is when she’s given ample opportunity to shine.

I Care A Lot will be available to stream on Amazon Prime Video in Australia, UK, Canada, Ireland, Italy and New Zealand from Friday February 19th, 2021.