Film Review: Glass Onion: A Knives Out Mystery; Rian Johnson has his cake and eats it too with bigger, better sequel 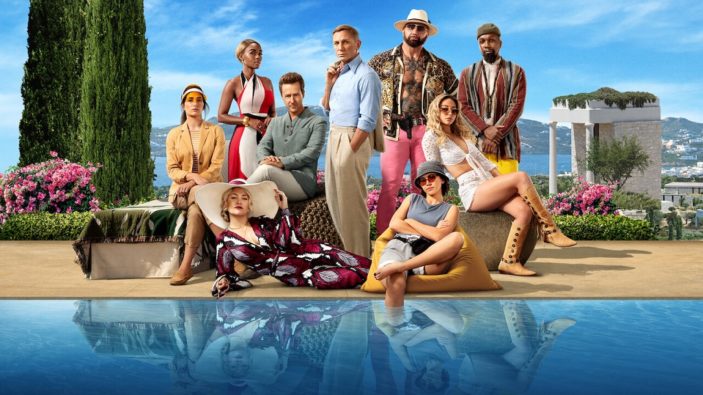 Rian Johnson had far too much fun paying homage to the works of Agatha Christie in 2019’s star-studded crime comedy Knives Out.  To say he executed it perfectly would be putting it mildly, but whilst a sequel to such a set-up seemed like a given, how anything secondary would be navigated was another mystery in itself.  In Johnson we trust, without question, but lightning doesn’t always strike twice.  And the notion of going bigger doesn’t always mean better.  And with his sequel moving to a lavish tech-engineered island locale, it goes without saying that this second Knives Out mystery is indeed bigger.

And, you know what, it’s better.

The original Knives Out remains its own entity when all is said and done as this sequel, Glass Onion (and that title will make much more sense when you see the film), has opted to take influence from the original film’s DNA rather than straight up imitate it.  Both can be viewed and enjoyed individually or as companion pieces, especially when looking at the film’s scathing commentary on the obscenely wealthy and the hypocrisy that comes with wealth and power; advantages that Johnson’s variety of who’s whodidits share.

Set in May 2020 when the pandemic was burgeoning across the globe and the notions of quarantining and isolation bubbles were becoming “the new normal”, Johnson immediately showcases the fun in store as our trusty detective Benoit Blanc (Daniel Craig) is re-introduced in a manner that’s miles away from the suave solver we have known so far; reduced to spending his time in the bathtub playing online games with some very, very famous friends (the first of a few tickling cameo appearances) is not how you expect this mystery to begin.

When he receives a mysterious box, one that he is elated to crack open through its intricate instructions, his criminal solving mind is reawakened, and it’s not long before he’s standing on a dock to board a yacht with a slew of other invitees; though his presence seems to surprise them in a particular way.  An elaborate invitation from the epitome of extra, Miles Bron (Edward Norton, having the most fun on screen in a very long time), a billionaire tech genius, the selected guests – whilst initially appearing as a group unlikely to swim in the same circles – all share history together from their pre-fame days where they were known as “The Disruptors”, due to their determination to push against the status quo.

There’s Senate-running governor Claire Debella (Kathryn Hahn), model, entrepreneur and social media nuisance Birdie Jay (Kate Hudson, an absolute riot), tech genius Lionel Toussaint (Leslie Odom, Jr.), and popular online streamer Duke Cody (Dave Bautista).  They’re an eclectic bunch (to say the least) but there’s evident friendship and camaraderie there; the only one not feeling the love – and the final guest – is Cassandra Brand (a film-stealing Janelle Monáe), whose very presence seems to fittingly disrupt Miles and the surrounding guests.  The gang’s all here and it isn’t long before a murder most foul takes place.

Except, it is actually kind of long.  At 139 minutes Johnson is in no rush to tell his Clue-inspired comedy, but we don’t mind in the slightest as the playfulness of his extended cast keep you enveloped (and guessing) before anything even resembling a murder takes place; we are over an hour into proceedings before the unexpected offing occurs.  The writer/producer is so in tune with the mechanics of the genre that this practically begs to be re-watched when all is revealed – and that’s even with an impossibly clever account of what takes place throughout the film from the perspectives of other characters and wider angles when Blanc, almost mind-numbingly upset at the sheer stupidity of the murder itself, details back just what has occurred for whoever is left standing.

Much like Knives Out, Glass Onion is an experience.  One that is best entered into without any knowledge of what’s to take place and, most importantly, experienced with a dedicated crowd.  As of now Johnson’s lavish sequel is going to stream on Netflix from December 23rd, but the director himself has stated he wants this in theatres (why he opted to go with Netflix then is a whole other conversation), which, in turn, has apparently led to the company to consider altering their model by placing the film in cinemas with a 45-day run prior to streaming at home.  It’s all very business-like and money hungry (I’m sure it would make prime murder mystery fodder) but if it means audiences can laugh and applaud together – the reaction out of the screenings here at the Toronto International Film Festival have indeed certified how well this plays to large crowds – then whatever steps need to be put in play should be counted.

Making a film this entertaining and broadly appealing isn’t an easy task, let alone for a sequel to match its predecessor’s reputation, but Johnson flexes the notion of having his cake and eating it too with inherent ease.  If only every filmmaker had the luck.

Glass Onion: A Knives Out Mystery is screening in select theatres from November 23rd to the 29th for an exclusive limited engagement, before streaming on Netflix from December 23rd, 2022.

Glass Onion: A Knives Out Mystery was originally reviewed as part of our 2022 Toronto International Film Festival coverage.