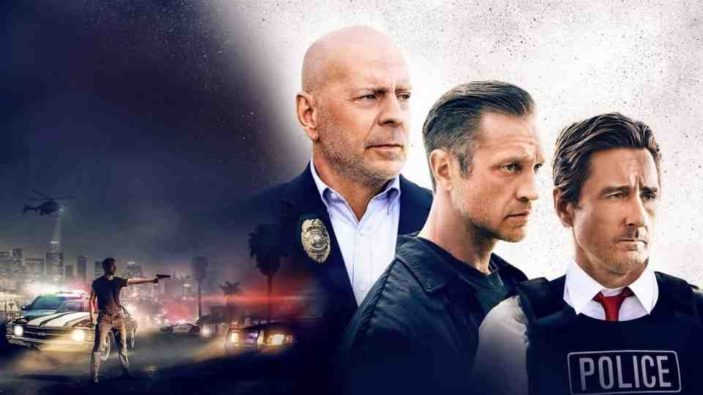 Another day, another Bruce Willis direct-to-DVD effort that continues the odd, sad decline of his career.  Keeping in tune with the last dozen or so efforts he has sleepwalked his way through (that is if he decides to actually show up for filming that day), Willis barely registers in Gasoline Alley, the fourth collaboration with director Edward Drake (Cosmic Sin, Apex, American Siege), a murder mystery thriller that can’t escape the ugliness of its premise.

Really, even allowing it to be called a “mystery” thriller is giving the film too much credit, as Drake doesn’t seem concerned with concealing the guilt of his obvious villain, seemingly more invested in giving himself a pat on the back for his meta inclusion of one of his own films (American Siege) being used as a plot setting as the suspicious Jimmy (Devon Sawa, the only actor genuinely caring about the craft) travels around Los Angeles in a bid to clear his name.

Jimmy, you see, has a criminal past, and him engaging with kindly prostitute Star (Irina Antonenko) only hours before her death means detectives Freeman (Willis) and Vargas (Luke Wilson, aware of what type of film he’s in, so delivers with flair accordingly) are on his case.  The film would like us to suspect Jimmy, but it frames him so obviously that we know he’s the only character we can trust, and because Sawa delivers the only performance worth investing in, there’s interest, however minor, held as he embarks on his own investigation.

Over the course of 97 minutes Jimmy meets various no-good types (all completely indistinguishable from one another) on his quest to prove his innocence.  Had Sawa been afforded a better script and direction, you can almost imagine a passable film being created in the process.  He’s working so far beyond his requirement that it only further enhances Willis’ genuine lack of interest and Drake’s utter contempt for continuity; note, if you’re going to film in Georgia and pass it off as Los Angeles, make sure you remove visual signs of the city from your final product.

It truly is a shame that anything Willis attaches himself to at this point is near-immediately disregarded – unless, of course, you’re watching for the unintentional laughter – and whilst Gasoline Alley isn’t a Willis feature, his presence will keep people away, and rightfully so.  That’s ultimately a shame for an actor like Sawa though, someone who has been delivering consistently great performances in many underseen projects and deserves his own spotlight in something, anything, that treats him with the respect that Drake so clearly doesn’t reciprocate.

Gasoline Alley is screening in select theatres, digital and On Demand in the United States from February 25th, 2022.  It will be available to rent and/or buy on DVD and Blu-ray in Australia from April 6th, 2022.