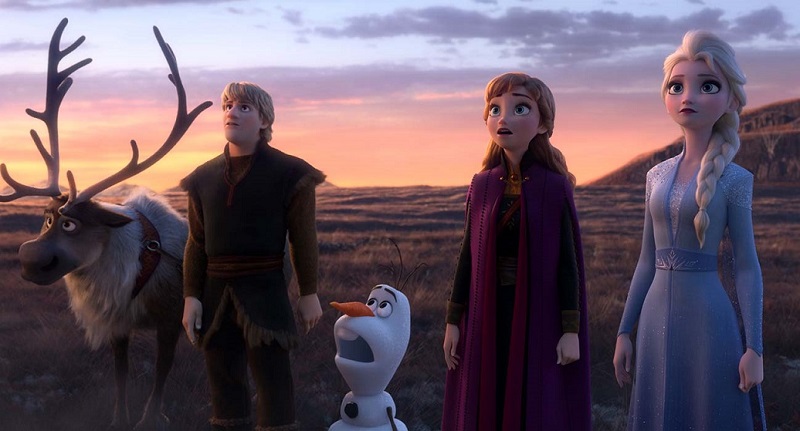 It’s a tough ask for a sequel to be as good, or better than its predecessor. Obviously Disney is resting high hopes on Frozen 2 to be as big as the original 2013 film, and box office numbers so far are already looking promising with $127 million in the US and a worldwide launch of $350 million and it’s not even out in all territories yet. But putting dollars aside, this movie needs to continue the story of two young strong female leads, have a radio station dominating ear-worm of a hit song and manage to lure in a fresh young audience for those easy merchandise sales. Parents be warned, your kids are going to force you into seeing this but the good news is, it’s actually worth it.

The film begins with a flashback as King Agnarr (Alfred Molina) and Queen Iduna (Evan Racel Wood) tell their two young daughters Elsa and Anna a bedtime story. The story revolves around the family’s past, their grandfather and his attempts to befriend the native Northuldra tribe who live north of their hometown of Arendell, however a tragedy befell the meeting and resulted in the Enchanted Forest remaining trapped and hidden away by a magical mist. Fast forward some time later, Elsa (Idina Menzel) is queen, and her sister Anna (Kristen Bell) is helping her. Kristoff (Jonathan Groff) is trying and failing to propose to Anna, and Olaf (Josh Gad) is being his humorous air-head self as he tags along with his friends. But when a mysterious siren song only Elsa can hear calls out to her, she decides to undertake a journey to discover what it means. Refusing to let her go alone, Anna, Kristoff, Olaf and Sven the reindeer all undertake the journey to the Enchanted Forest and the mythical place of Ahtohallan.

Director/writer duo Jennifer Lee and Chris Buck could have taken the easy way out and maintained the same formula from the first film to this one. Instead they have crafted a sequel that sets out on its own path by delving into the mystery surrounding Elsa and Anna’s parents, whilst also focusing more on Elsa. They also do away with a traditional villain, though a crucial reveal later into the film does paint a particular character in a different, less positive light. Where the first film focused heavily on the sisterly bonds, here it expands to encompass all of the main characters as a strong “family” unit. Thematically it looks at examining the past and correcting mistakes in a way that’s accessible for children but also refreshing for adults. There’s also the not so subtle environmental and tampering with nature messaging that shares some similarities with Disney’s other animated property Moana. The journey for both Elsa and Anna is both to a physical location and also metaphorically an internal one to find the truth.

Menzel gets to really step up in this movie as the big sister and Queen. She not only feels the burden of responsibility to the people of Arendelle but also to her sister, and she knows that her magic holds a deeper meaning. Whilst Bell gets to add some of her neuroses into Anna, as the fiercely loyal and protective younger sister. But the absolute scene stealer is Gad’s naive and precious Olaf. There is one scene where he recounts the entire first movie in under a minute which reminded me a bit of Michael Pena’s Luis from Ant Man. Groff has probably the least amount to do here, but there is one moment that makes Kristoff remarkable with the simple words of “I’m here, what do you need?”, he becomes the supporting partner Anna needs. Something that shifts framing Anna from a damsel in distress, to helping her achieve her goal by working together.

Obviously the film has a reputation to uphold when it comes to its soundtrack. Menzel’s “Into The Unknown” is the belter that will most likely be the radio ear-worm but it remains to be seen whether this can topple the strangle-hold of “Let It Go”. Bell’s “The Next Right Thing” starts off surprisingly dark but crescendos into an optimistic burst. Groff’s “Lost In The Woods” is an earnest 80’s pop song parody complete with back up singing reindeer that will definitely go over kids heads but is clearly there for the parents. They’ve also opted to have Panic! At The Disco do “Into The Unknown” whilst Weezer cover “Lost In The Woods”, the former more successful than the latter, probably because Brendon Urie can hit those high notes. Will it be Menzel or P!ATD who get the radio spins?

The animation in this is also sublime, with colour palettes mixing autumn based reds, orange, yellow, gold and brown where before it focused more on white and blues. Then transitioning to mixtures of pinks and purples, or greys and blacks. Also Elsa gets to demonstrate some next level magic and her spells cast beautiful wispy ethereal imagery. The various locations as we venture from the Arendelle to the Enchanted Forest to the mysterious ice caverns of Ahtohallan all have their unique geographic look and colours, something that also adds depth and visual beauty to the film.

Frozen 2 is an enjoyable and strong sequel that manages to expand upon the first movie by exploring the key mystery around its core characters. It also affirms the strength of family bonds and gives our two leading ladies the independence and agency to be themselves. The young audiences will love the eye catching, colourful visuals and young relatable characters. Whilst the parents might finally be able to get their kids to let it go and move on into the unknown.