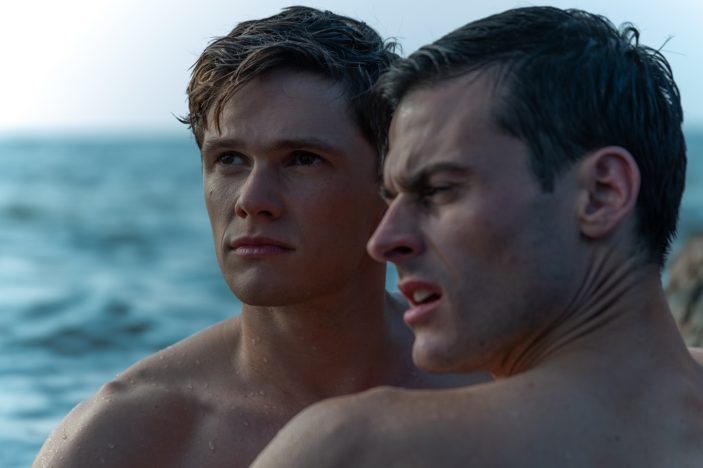 Based on Sergey Fetisov‘s memoir, Firebird – appropriately screening this week in relation to International Day Against Homophobia, Transphobia and Biphobia – is an achingly romantic, though still not entirely ground-breaking tale of forbidden love set in a time when same-sex affairs were met with severe punishment.

In the midst of 1977 Cold War in Soviet occupied Estonia, Peeter Rebane‘s film centres itself on young private Sergey (Tom Prior, flexing his soulful eyes like it’s no one’s business), an impossibly handsome twunk who dreams of attending drama school in Moscow whilst serving at an air force base in the military.  Reebane and Prior’s script frames the military experience with the type of harsh colours you expect at times – you want a Full Metal Jacket-type bullying sergeant? You got one! – but this extreme environmental practice assists in only further highlighting Sergey’s own sensitive soul.

It’s this sensitivity that captures both the seeming affection of lovelorn Luisa (Diana Pozharskaya) and recently arrived fighter pilot Roman (Oleg Zagorodnii) who, in return, earns both their eyes as well.  It’s Sergey and Roman who ultimately act on their mutual attraction, the two stealing off-base time together in spite of the risks, forming a bond that moves beyond the sexual; though, in two particular scenes – both tastefully filmed – the film isn’t shy about expressing this.

Whilst Firebird isn’t always showcasing Sergey and Roman’s love story in a manner that sets it apart from other similarly themed romances such as God’s Own Country and Brokeback Mountain, it earns points for at least not entertaining the angst-ridden gay route.  Both men are comfortable with their sexuality, it’s just their surroundings that threaten such freedom.  The KGB wishes to eliminate any physical expression of attraction between two men, and Stalin has even recriminalized consensual sex pertaining to this also, so the first half of the film – that which is set within the military base – moves more so with a sense of tension and urgency as Sergey and Roman do their best to keep their relationship private.

When the film jumps ahead a few years is when it descends into something a little more traditional, with Sergey living freely at acting school, seemingly oblivious to the advances of his fellow male classmates.  Roman has supressed his true identity in Sergey’s absence, but their eventual reunion proves no matter who Roman moves on to, Sergey will remain his most honest desire.  Whilst the latter half of the film never quite feels as ripe as the minute prior, Firebird is arguably more romantic and more devastating here, with Prior and Zagorodnii’s chemistry keeping proceedings constantly engaging, even if the material is never as challenging as it could be.

Regardless of its execution, Firebird is a stunning feature from Rebane, further enhanced by lush cinematography (courtesy of Estonian cinematographer Mait Mäekivi) and a beautiful respect for its narrative, one that isn’t distracted by the period settings.  With everything going on in the world right now, a film such as this, even if the ground it walks on isn’t broken under its weight, serves as a beautiful reminder that we have made progress and that the many men who perished with their own hidden loves shan’t be forgotten.

Firebird is screening exclusively in select Australian theatres for one night only in honour of International Day Against Homophobia, Transphobia and Biphobia on May 17th, 2022.